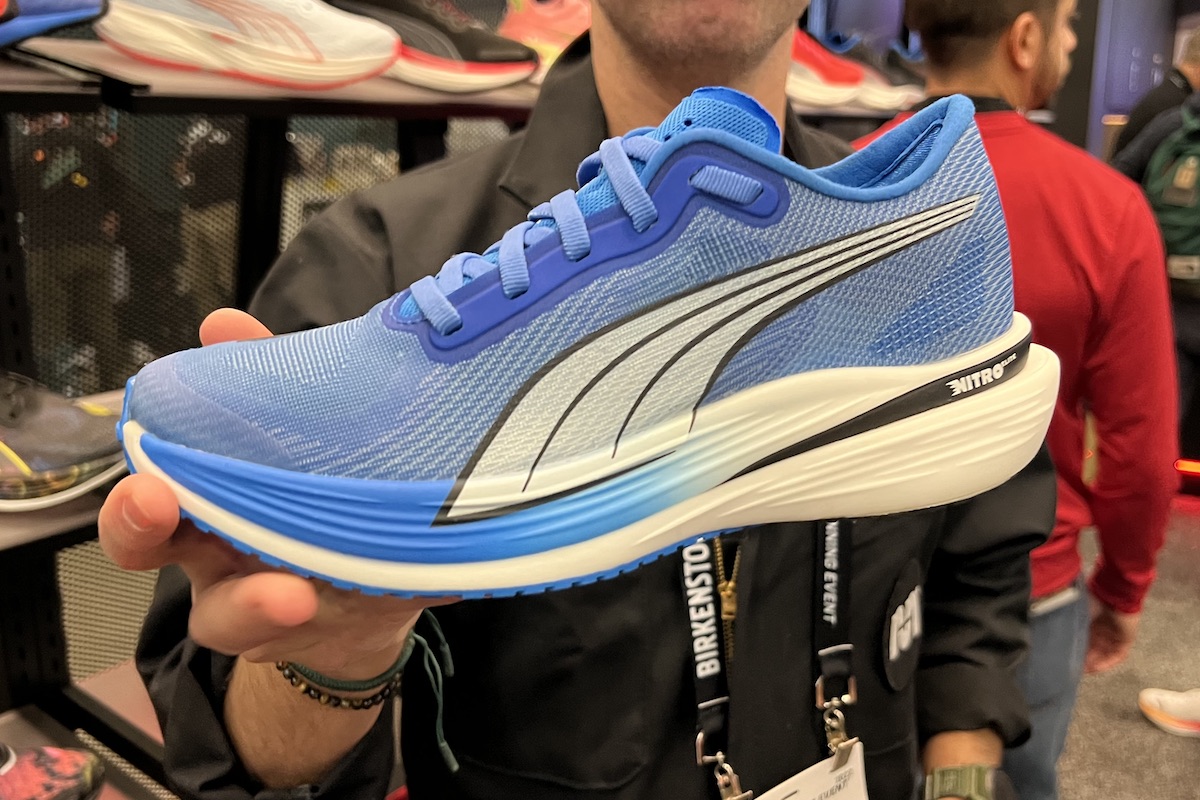 Puma seemingly didn’t exist in running, until they did. And damn did they show up in 2021 with a statement that put them right back into the run conversation. With a core lineup of the Velocity Nitro, Deviate Nitro, and Liberate Nitro, they gave us a set of reliable shoes at a fair price point.

The supercritical Nitro midsole provided a responsive ride that embraced the simplistic joy of running. And they didn’t stop there, refining those models in concurrent versions, fixing the things that didn’t work and keeping the things that did. Oh, and they also put a race day shoe (Deviate Nitro Elite) on Molly Seidel as she took home bronze at the Tokyo Olympics.

That said, probably no company struggled more than Puma during the logistics debacle of Covid. For the better part of a year, the shoes would randomly go on sale, then disappear. After Molly’s performance in Tokyo, the Deviate Nitro Elite was just… nowhere to be found. For a long time. And then there was the Fast-R, the next generation of racing, which is again currently sold out, but was apparently available at some point.

Frustrations aside, those that did get their feet in a pair were pretty pleased with their experience in the shoes. Lightweight, comfortable, fast, and with an outsole rubber that is quite possibly the best in the game, Puma has all the pieces in place. It’s just a matter of getting them out there on a consistent basis.

A new year is always an opportunity to turn over a new leaf, so here’s hoping for a more linear path going forward. Because there’s plenty to be excited about. On the road side, yes, but it also appears that Puma is making a concerted push into trail, and we’re equally excited about those models.

Here’s what we know from talking to Puma at The Running Event in Austin, Texas. For an even more in-depth look at all the shoes, make sure you head over to our YouTube manager for our rundown with Todd Falker, Senior Product Line Manager of Puma’s performance running division. STACK/DROP: 36 mm/28 mm (8 mm drop)
WEIGHT: 7.4 oz (211 g) for a US M9
RELEASE DATE: February 2023
PRICE: $200
NOTABLE FEATURES: The first version of this shoe was the one that Molly wore for Tokyo, and it’s hard to give a better endorsement than a third-place finish against the best in the world. Even with the Fast-R available to athletes, you still see most Puma elites going with the Deviate Elite.

While we really love the shoe as a tempo trainer (especially at that $200 price point), we think it falls short for us on race day. But that’s not to say it’s not a great shoe, because it is. The new version features some minor improvements, but all in all, it looks pretty similar to its predecessor.

The major difference comes in the form of an updated carbon fiber plate (PWRPLATE), which is now a single, spoon-style plate with vertical spines in the forefoot (see below) and an asymmetrical heel. The previous plate was split in the forefoot and Puma found that its athletes were sometimes supinating due to the unstable nature of the split. The new PWRPLATE has a straighter and more square forefoot for a wider base to push off. Obviously, the idea behind this is a more propulsive toe-off and snap through the stride. In concert with the plate, the shoe also comes with an improved rocker to assist in a quicker transition.

They also slimmed down the toe box, so instead of that rounded and wider design in the first version, you’re getting a more traditional dart-like silhouette.

As with the first version, the shoe features a full-length Nitro Elite midsole, Puma’s Peba-like blend of supercritical foam.

The good news is that this shoe still stays at that $200 price point, which is more than fair for what you’re getting out of it. It’s highly comparable to the forthcoming Under Armour Velociti Elite, which is priced $50 higher. Both are very capable speed shoes at shorter distances; they just wouldn’t be our first pick for the marathon. At its core, this is a lightweight tempo shoe, and we’d probably keep it in that range. And by lightweight, we mean really lightweight, at just 6.8 ounces for a US M9. It appears they fixed some of the issues we had with the shoe, including a softer and more supportive upper. The upper on v1 was a bit stiff and scratchy with no heel support, so we’re happy to see that.

The Nitro foam in this version is also a tad firmer, so we’ll see how that feels on the run. Luckily, we still get the Pumagrip outsole, which is phenomenal. Put all these things together and you have a peppy speed day shoe for only $110 (according to spec sheets, though we were told $130 at The Running Event, so don’t hold us to either of those numbers). We’re very into that. STACK/DROP: 40 mm heel, 30 mm forefoot (10 mm drop)
WEIGHT: 9.7 oz. (274 g) for a USM9
RELEASE DATE: July 2023
PRICE: $150
NOTABLE FEATURES: Puma likes to call this shoe the Deviate without a plate, and it’s actually one of the more exciting shoes of Puma 2023 because it got a significant midsole upgrade. Where the first version was a layer of Nitro stacked on a layer of EVA, the Magnify Nitro 2 is actually a full slab of Nitro foam, 40 mm of it, to be exact. Ideally, that will provide a more comfortable ride for those longer miles.

Another positive is that it loses some weight and manages to come in under 10 ounces, despite its max cushion status. Also has the Pumagrip outsole and an engineered mesh upper with an internal and external molded heel. Instead of a full Nitro midsole, you get a two-piece version with a firmer rim and softer core to allow for soft and responsive landings, but more structure on the outside to keep you foot in place. Puma also partnered with a running specialist retailer out of Denmark to design a more custom orthotic midsole that wraps the heel and offers more arch support.

Additional stability elements include PWR TAPE supports on both the lateral and medial sides, as well as a TPU heel support clip. All that to say, your foot shouldn’t have an issue staying in place. A rocker geometry helps with transitions. The entire Runguide system comes together in a fairly lightweight package at under 10 ounces for a US M9. STACK/DROP: 36 mm heel, 26 mm forefoot (10 mm drop)
WEIGHT: 6.7 oz. (197 g) for a USM9
RELEASE DATE: N/A
PRICE: $150
NOTABLE FEATURES: We first saw this shoe in one of its early iterations at the Boston Marathon weekend last year, and it was a wild one for sure. While some brands like Mizuno are cutting out the heel section in race shoes, Puma see-sawed the other way with an aggressive toe cut-out. Oh, wait, it also includes an undercut heel as well.

The midsole consists of a bottom layer and rim of Nitro foam, but a firmer version than you’ll find in other Puma shoes. A more flexible full-length PWRPLATE sits inside of that and is topped with a layer of Peba foam, as well as a Peba insole. As far as we know, there’s only a couple shoes that employ that insole strategy, and off the top of our head we can only think of the Tracksmith Eliot Runner and Nike Streakfly (maybe the Saucony Endorphin Pro as well?).

This is primarily intended for 5K and under distance, so it’s a very specific use case shoe, and probably something that was primarily designed to cater to Puma’s elite athletes. Honestly, with Puma’s track record on niche models, we’ll be surprised to see this available widely for an extended period of time. In fact, they said at The Running Event that it will be a very limited distribution. So good luck picking up a pair. This translates to a narrower heel and a gradually widening midfoot, in addition to more stability (which apparently, women wanted, though not our women here at Believe in the Run). That stability aspect comes into play with a built-in footstrike guidance called RunGuide.

Last year’s version was a heavier and firmer ride, two things that we generally disdain, and especially did in this shoe. Neither Meaghan nor Adrienne particularly enjoyed the ride of this shoe on account of both those things. While it’s not overly heavy on paper, it just feels bulky on the run.

The bad news is that the Run XX is pretty much the same shoe, except it gets an upper update. If you like those things, maybe you’ll like this shoe, but we’re not sure if it needs to exist. It does look good, though. As far as the Voyage Nitro, we didn’t even know this shoe existed in previous versions, so we have no idea what to compare it against. But let us say that this shoe looks incredible, so we’re cool with it no matter how it performs.

However, there are some very promising details in this one that makes us excited to see how it runs on the trails.

Let’s start with the full Nitro midsole. Yeah, it’s a full Nitro midsole, it’s probably gonna be great because we love it in all of their road shoes. It’s a similar formula to the Magnify, which again, is one of the more exciting shoes of 2023 from Puma.

Okay, we’ve sung the praises of Pumagrip outsole on the road shoes, so here we get Pumagrip ATR, a sticker version of that with 4 mm lugs. Seriously, we’ve always thought regular Pumagrip makes some of their daily trainers a hybrid trail shoe, so we can’t wait to see how the ATR performs on the trails. We’re pretty confident it’s going to give hell to those rocks and roots.

In terms of the upper, we get a mono-mesh with an internal bootie, integrated eyestay, and a snug heel and pull-tab. All things that are good for the trails. Again, all of this is done in a very attractive package and the $140 price point is at the lower end of trail shoes these days. STACK/DROP: 31 mm heel, 23 mm forefoot (8 mm drop)
WEIGHT: 9.4 oz. (268 g) for a USM9
RELEASE DATE: Summer 2023
PRICE: $150
NOTABLE FEATURES: While we’re excited about the Voyage Nitro, this one jumps off the page more than any other. We get a full-length bed of Nitro on the inside where the foot lands, with a firmer foam rim for a bit of structure. Of all the trail models, this is the most technical-oriented, with a more aggressive Pumagrip ATR outsole pattern and 4.5 mm lugs. And it still remains reasonably light at 9.4 ounces.

Seems like it could be a really fun shoe to just tear up some technical terrain, so we’re definitely excited to test this one out in concert with the Voyage Nitro 3.