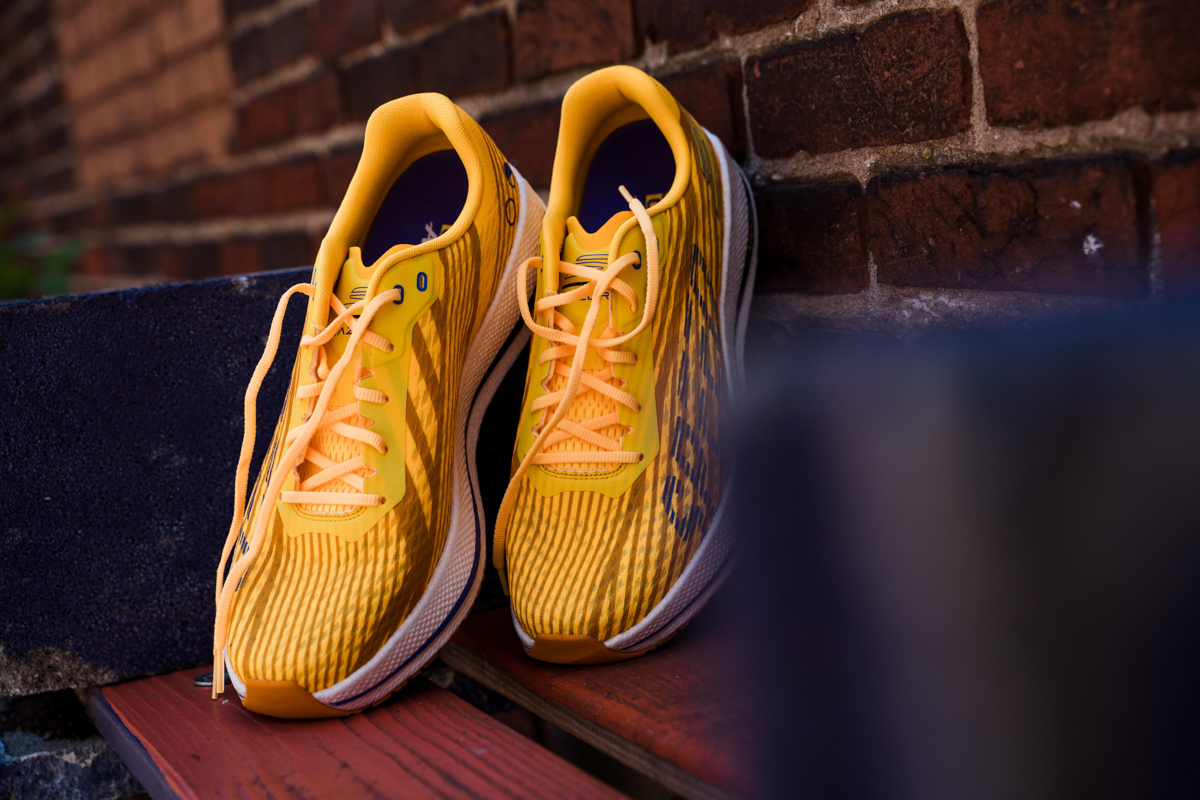 SAM: As far as I can remember — unless I suppressed some memories in my subconscious — I haven’t worn a Skechers shoe since, like, third grade. Back then, wearing Skechers was enough to draw the ire of your friends, and it might cost you your chocolate milk or land you with a noogie at lunch. Basically, the Skech’ was the elementary school equivalent of a scarlet letter.

Fast forward about 20 years, and, at least to those in the know, Skechers is no laughing matter. The brand has been pushing the hits for a while now, and the GoRun Razor 4 might be one of them. I got my pair specially delivered in the middle of a hurricane, so I had to give it the full treatment. Would it give me the strength to outrun my schoolyard bullies with enough comfort to last through math class? Keep reading to find out.

BRANDON: Maybe I’m one of Sam’s bullies, but Skechers still hits me as a lame brand. Sure, running shoe nerds know they make some decent options, but they just don’t get me going. Well, the GoRun Razor 4 might be my favorite Skechers shoe. It might not be saying much coming from me, or maybe that’s just even higher praise.

There’s something about the Lakers-esque yellow and purple colorway that looks pretty sweet. With “Speed” emblazoned on the side, there shouldn’t be much debate about what the GoRun Razor 4 is built for. This is a snappy trainer for faster workouts and tempo days, with Skechers tech to match. The combination of the Hyper Arc system, a carbon-infused plate, Goodyear rubber, and a Hyperburst Pro midsole (I told you there’s a lot) means that you should expect nothing less than a fast and snappy ride from this bad boy.

RYAN: Hello, Skechers, my old friend. Well, I’m not sure if we’re old friends, but this is my third Skechers shoe of the year. Consistency, baby. At this point, I feel like I know what I’m getting from the everyday Skechers (GoRun Ride 10 and Persistence), so it was nice to get my feet into something with a little more speed — and a lot more color. I was a bit of a fly in the ointment in both of the reviews mentioned above, but I keep coming back with an open mind, and I’m mostly glad I did.

I don’t have much to add after Sam’s elementary school reminiscing, so let’s just crack on. SAM: First things first, the Skechers GoRun Razor 4 looks sick. If I wore this shoe to Ms. Lynch’s class, it would take a while for anyone else to realize I was rockin’ the Skech’. The Lakers-esque colorway pops, and the “Speed” logo says it all. Oh, and the GoRun Razor 4 is light, too. My US M9.5 tipped the scales right around 8 oz., which is nothing to complain about.

There’s also something to be said for the tongue and lace fit. It’s not a gusseted tongue (*crowd boos*), but there’s a notch where the tongue meets your ankle (*booing stops*). It combines nicely with the suede-like fabric to keep the tongue locked down and centered. Skechers stuck with a simple upper, and it made for a great fit on my foot. It’s light, comfortable, and gets out of the way when you get down to business.

Now, let’s talk performance. I put between 30 and 40 miles in the Skechers GoRun Razor 4 during easy runs, moderate efforts, speed work, and a faster long run. Previous editions of the shoe were built closer to racing flats, but I appreciated the extra material for version four. This year, there are about three more millimeters of stack and about an extra ounce of weight. Usually, these increases would hurt speed shoes, but I think they massively improve what Skechers is doing.

I found the GoRun Razor 4 serviceable for easy runs, good for moderate runs, and outstanding for speedwork and my long run. It’s a shoe that I’d describe as distraction-free. The Hyper Arc rocker and Arch Fit support make the ride incredibly smooth and stable. As you might expect, the Goodyear rubber is grippy and durable, and it keeps you focused on running rather than where you’re landing each step.

BRANDON: This type of shoe isn’t usually my cup of tea, especially when training for a marathon. However, I was pretty impressed with the results. The mono mesh and polyester upper provides a stretchy, lightweight, and comfortable fit, and it was tight enough that I didn’t have to worry around corners.

Moving down, the Arch Fit technology offers just enough support under the foot for a strong and consistent cadence when in stride. Skechers chose a carbon-infused plate to pair with its Hyperburst Pro midsole, which is as snappy and cushioned as can be. I had no issues with the outsole, but it’s always tough to find fault with Goodyear.

RYAN: I like a loud colorway, especially when it’s a color that most brands don’t pick. If I had a dollar for every yellow shoe I’ve seen or worn this year, I don’t think I could get very far at the dollar store. Both Sam and Brandon related the yellow and purple to the Lakers, but I couldn’t help hearing Ed Orgeron in my head yelling “Geaux Tigahs” in his classic Louisiana drawl. It’s a colorway that would get whupped by Alabama, but at least it produced Joe Burrow, right?

Anyway, I’m with both Brandon and Sam in saying that I enjoyed the pop of the Hyperburst Pro. The basic design of the Skechers GoRun Razor 4 doesn’t fall too far from the tree, but it’s impressive what happens when you switch up the ingredients. I had a lot more fun pushing this shoe through some quick 200m intervals than doing just about anything in the Persistence or GoRun Ride 10. Hyperburst Pro is a TPU-based foam, which is all the rage nowadays. Every brand has its own version, and they seem to be the go-to for faster efforts.

I delivered Sam’s pair to him in the middle of a Faster Bastards Saturday classic, and it just so happened to be in the middle of a hurricane, or at least, the remnants of one. There’s no better test for an outsole, and the Goodyear slab passed with flying colors. The coverage is excellent, and I never once slipped or fell on the wet planks of Baltimore’s inner harbor. SAM: While I love the yellow colorway, it stood out so much that it stained my Bandit Cushioned Quarter socks (shoutout to Bandit Running), so keep an eye out for that. I’m a lighter runner with a higher cadence, so the efficient build of this shoe appeals to me, but if you live on the max cushion end of the spectrum, this might not be the shoe for you. While the stack and weight have increased enough to make this shoe usable for everything, it’s just barely in the middle section of the Venn diagram. I wouldn’t be surprised if some runners find this shoe too firm for anything outside of speed work and short tempos.

Also, I’m not sure if this is good or bad, but I didn’t notice the forefoot plate at all. The GoRun Razor 4 is snappy when you pick up the pace, but I attribute this to the racing flat-like build and bouncy foam. It could be a pro since a rigid plate would make a shoe like this uncomfortable for daily use, a la the OG Adidas Adizero Pro. However, it could be a con since the shoe doesn’t have the same pop as something like the Endorphin Speed.

BRANDON: Other than the fact that I wouldn’t be caught dead in a pair of Skechers, it’s tough to find too many flaws. I don’t know that it’s cushioned enough for easy days, but it’s not quick enough (to me) for race day, either. If there’s one knock, it seems to be versatility.

RYAN: So, both Brandon and Sam highlighted that the shoe fits well, but I disagree. I’ve had terrible luck with Skechers shoes all year because they all seem to run long. I’ve had too much room in front of my toes time and time again, and it’s the same story here. Robbe also got this shoe, and he didn’t run in them very often because of the same upper issues.

Otherwise, yeah, I had some bleeding with the yellow upper, but it didn’t discolor my socks, my socks discolored it. SAM: Like Lamar Jackson in my fantasy football lineup, this shoe is set it and forget it. The smooth/stable rocker, bouncy toe-off, and light weight make this a shoe that disappears on your foot when you are running, with just enough cushion to keep your legs from taking a beating. While some might prefer a more cushioned shoe for do-it-all purposes, I would argue that the efficiency and inherent stability that come with a lower stack shoe are benefits that the Skechers GoRun Razor 4 has.

BRANDON: I have to hand it to Skechers, I’m impressed by the GoRun Razor 4. It might not be my shoe of the year, but it performs well for what it is and can compete against Nike and Adidas. The GoRun Razor 4 offers a quick, snappy toe-off feeling whenever you want to go fast. I have no problem recommending it for tempo days or interval workouts.

RYAN: This is my favorite Skechers shoe of the year. It didn’t have a high bar to clear, but it did so anyway. I enjoyed my runs, even the hurricane run, and the bounce was enough to get me by. You might want to try the Skechers GoRun Razor 4 on before you buy it, but that comes down to how well you get on with the mono mesh upper.

You can pick up the Skechers GoRun Razor 4 for $130 at Running Warehouse (featuring free 2-day shipping and 90-day returns) by using the shop link below. Sam is a Baltimore city school teacher and one of the fastest runners in the area. If he’s not running, he’s cooking or watching all three Matrix movies… in a row… again.