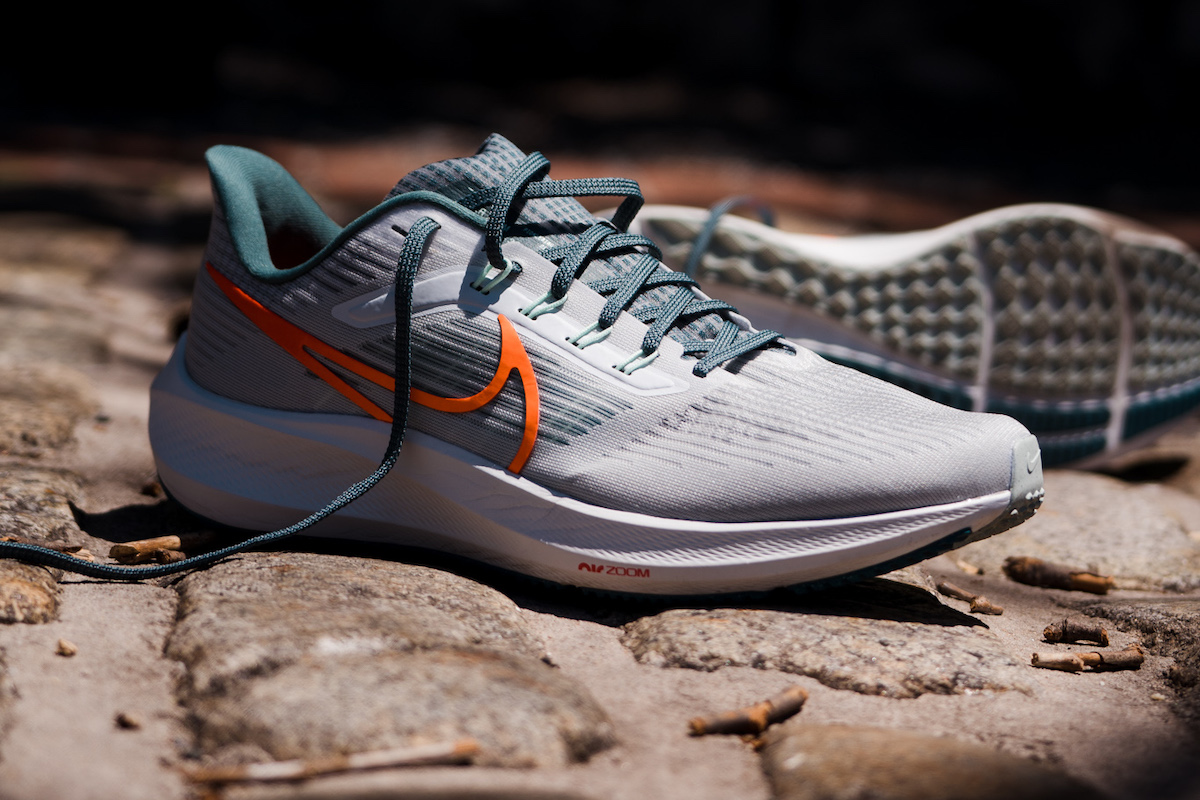 ROBBE: Sometimes you ride the winged horse, sometimes the winged horse rides you. Over the course of almost four decades, the Pegasus has been that mythical creature, magical at times, a stud at others, somewhat of a wildhorse (not to be confused with the Nike trail shoe of the same name) on off years.

But when it’s reined it, it’s one of the purest of breeds out there. Last year’s version, the Pegasus 38, had some of that magic, mostly in the combination of the full React midsole with the pressurized Zoom Air unit in the forefoot. We actually enjoyed that shoe quite a lot and thought it fixed some major issues with the Pegasus 37, namely some heel slippage and shallow toe box issues. However, the Pegasus 38 seemed to be polarizing in that we’ve heard complaints about the stiffness or general blockiness of the shoe. We think a lot of that has been fixed, but before we say why, let’s get into the basics of the shoe.

The Pegasus 39 features a very breathable upper, which was designed by testing runners and finding out where the foot needed cooling the moost. The medial and lateral sides are essentially translucent while the inner part of the upper features a midfoot band to lock the foot in place, assisted by Flywire support. A plush tongue complements the package.

As with last year the midsole is full React, one of the more resilient and comfortable midsole foams out there, even four years after its debut.

The outsole features a slightly different lug pattern with an additional flex groove in the forefoot for more flexibility on the toeoff.

Now that we got that covered, let’s give the ol’ giddyup to this magical winged beast.

THOMAS: Robbe is so poetic that you might think this is the Iliad and not another one of our sports footwear vivisections. Alas, this is a mere shoe review and not a myth. If you read Robbe’s part carefully you may have learned a new word: moost. It isn’t a shoe term, it actually took me three times to type out before spell check gave up trying to fix it. And he calls himself an editor, smh.

Nevertheless, Robbe covered the most important updates and nitty-gritty details (i.e. boring specs) to the Pegasus, so now it’s on to the fun stuff for the rest of the review. One last note about what the Pegasus line means to me (it’s like a third child in my family at this point), and then I’ll get to the bones of the review.

The first shoe that formed my idea of a daily trainer is Pegasus. When I started doing reviews, the Pegasus was the shoe that I could easily recommend for any runner starting out in the sport. Its beauty is in its simplicity.

There’s a few things that make a running shoe a staple shoe in someone’s lineup, and the Pegasus has almost always covered those bases. First, it has a well-fitting upper, which you need day in and day out. Next, it has responsive and resilient cushioning that provides a sturdy platform. You want it to hold up over time. And finally, a durable outsole to rack up hundreds of miles. Bonus points for a reasonable price point with above-average style. I say above-average style because the Peg transitions nicely to casual wear once it’s been retired. It may not claim the same fashion status as the AirMax 90, or Chuck Taylors, but the Pegasus is a straight-up classic that every runner should experience once. ROBBE: Let’s start with the fact that most Nike shoes are increasing in weight these days, like the recent Nike React Inifinity 3 which now weighs as much as the Adidas Adistar. Pandemic pounds hit us all equally. We were a bit nervous that would be the destiny of the Pegasus, but were pleasantly surprised to see the exact opposite. The Pegasus has always hovered in that 10-11-ounce range, so to see it drop nearly an ounce was a good omen of things to come.

The lockdown of the upper is every bit as secure as you could want from a daily trainer. The Flywire works as it should while the new midfoot band locked the foot down and the padded tongue provided a layer of comfort. Yes, the fit is narrow and there ain’t a ton of room in the toebox. Nike fans know– this is a Nike fit through and through. I consider this a good thing, some may consider it bad.

On the run, the Pegasus 39 is flexible and transitions smoothly through each stride. The React cushioning in this year’s version seems to be softer than last year, which most runners will appreciate. I took this up to 10 miles on my runs and it proved as comfortable from the first step to the last. I really, really, love this shoe as a workhorse daily trainer.

Gripping the road is something the Pegasus has always done well and this one is no different. While the trail side struggles to gain its footing, I always felt sure in the Pegasus 39 even on a rainy long run. It simply holds on well to everything; you’ll have no problem cornering and transitioning in this one. It can also double as a trail shoe on less technical terrain. The extra flex groove in the outsole was the right move as well, the flexibility is appreciated and was a necessary improvement over last year’s version.

I did throw in a couple faster miles in the show and it can handle them, just not as well as last year’s version, in my opinion.

THOMAS: The excitement for this update is in the feel. The Pegasus 39 feels light on the foot while the upper fits the foot flawlessly. My narrow foot looks fast wrapped in the breathable flexible mesh. This upper’s fit is improved over past models and mitigates the heel lift that I had in the last couple of models.

The React foam underfoot is as comforting as a memory foam bed. The foot is protected on impact from heel to toe while moving through the stride phase. Flexibility is the name of the game in the Pegasus 39, with cushioning that moves and flexes with the foot. At first, I was concerned that the thinner forefoot wouldn’t have enough React foam to keep the palm of my foot comfortable over long miles, but the pillow of Zoom Air behind the toes adds comfort and some good sensory feedback.

Finally, we get down to the outsole. The traction on this shoe can’t be argued with and there’s plenty of it with nearly full coverage save for a sliver of exposed React. The shoe grips and claws forward, cornering with ease in any condition or surface. You will get hundreds of miles out of this shoe, no problem. ROBBE: If I had to come up with a bad, it’s not even really bad, it’s just different. One thing I really loved about last year’s version was the pop I felt from the Zoom Air unit in the forefoot. It was pronounced and lively, especially when you picked up the pace. I’m not sure if the new unit is tuned to a different PSI, or the overall design is different, but you definitely don’t get that same sensation. It’s not a dealbreaker, it was just what I liked most about last year’s version.

I actually think the design of this one is super lame, especially in the initial five colorways. It looks like something Under Armour would pawn off to DSW. I know they’ll drop the cool ones later on, but at least give one option as exciting as the trail line.

THOMAS: I would agree with Robbe that the design isn’t the most exciting out there. Maybe when the next wave of colors or the NikeID version is available, I’ll change my opinion.

Additionally, I would like to see what the forefoot of the Pegasus 39 was like if it had a couple more millimeters of stack height. ROBBE: Look, it’s been a damn good year for the daily trainer category. Asics is putting out straight bangers from the Gel-Nimbus 24 to the Glideride 3 to the Novablast 3 (coming in September). Puma dropped the Velocity Nitro 2 at a respectable $120. The Saucony Endorphin Speed 3 will blow people’s minds with its versatility and the Ride 15 is the best version in years.

But for just a day-in and day-out blue-collar shoe that hauls the hay when it’s time for harvest, it’s hard to beat the Pegasus 39. For sure I’ll be coming back to this one as an all-arounder that can be used for everything from running to spending a day on your feet at work.

And though it picked up $10 due to inflation and supply chain BS, it’s still a pretty great deal for what you get.

THOMAS: Robbe said it above, this is a great year for daily trainers. Consumers have multiple options and your choice will come down to slight differences based on your preference. The Peg 39 is aimed at the neutral, standard-width runner. If that is you, you won’t be disappointed. Larger athletes may want more cushioning like you’ll find in the Glideride 3. If you want a wider base with mild stability the Saucony Ride 15 is a better choice.

I said in the opening that the Pegasus has always been an easy shoe to recommend. The Pegasus 39 remains on that list. If you’re a beginner (or even seasoned) runner, this continues to be that shoe that gets the job done. Running your first marathon? This can carry you through an entire cycle and even through your goal race. Plus, the drop in weight and the nimble feel that comes along with it place the Pegasus 39 in line with popular shoes like the Hoka Rincon and the Asics Novablast.

You can pick up the Nike Pegasus 39 for $130 at Running Warehouse (featuring free 2-day shipping and 90-day returns) by using the shop link below.