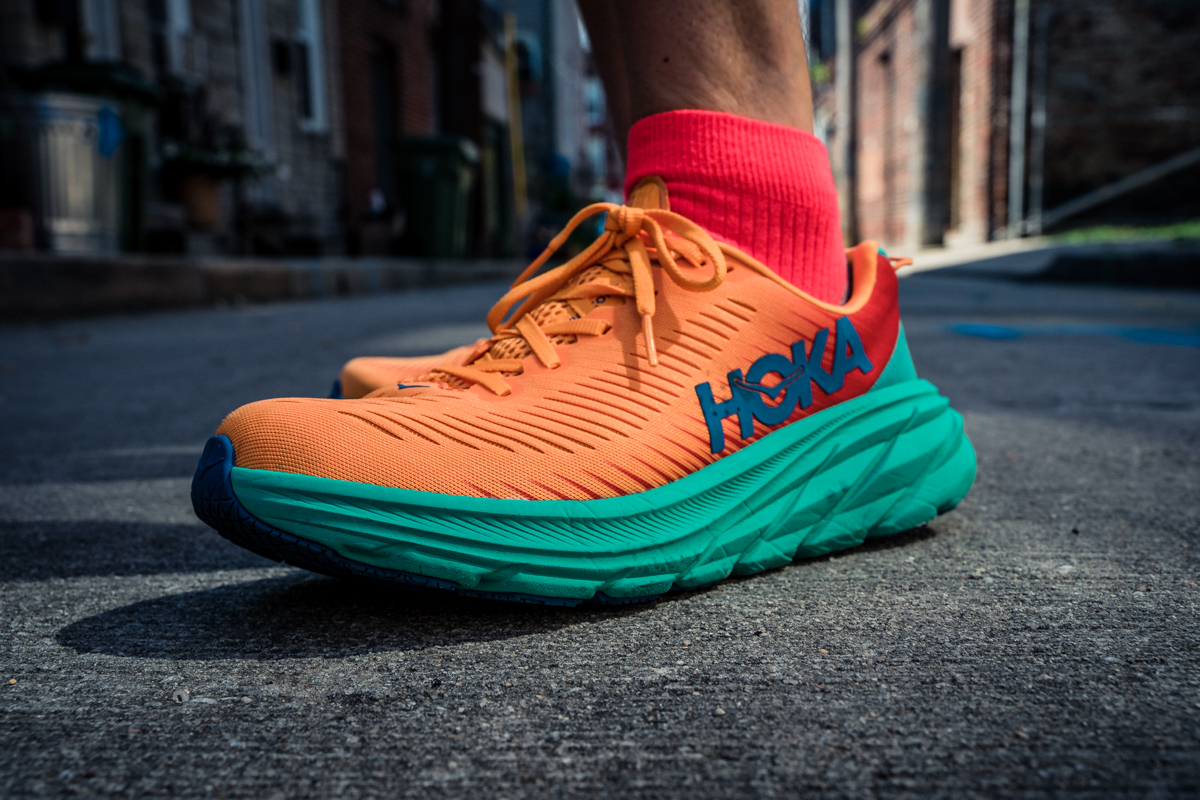 ROBBE: Like that adorable art school girl you were enamored with until you realized her favorite artist was Ed Hardy, my past experience with the Rincon has been all butterflies and butter, until it wasn’t. Out of the box, every version of this shoe has been a beauty. Beloved for its light weight, max cushion, and rolling ride, it has quickly become a fan-favorite over the last two years.

Except – as most Rincon lovers know, it had a tendency to lose that magic pretty early on. It’s rare we get a ton of miles in a shoe, but I was able to put in 150 miles in the last version, and it seemed to lose some/all of its fizz, like that mostly-full can of Coke my wife has left in the fridge for the last week, with no intentions of ever picking it up again. Like, why even open it in the first place? Just eat a tablespoon of sugar and call it a day.

Anyway, the first feel of a Rincon is always as sweet as sugar, and this women’s colorway even looks like watermelon sugar (shoutout to the IG follower who called that out). Speaking of watermelon, let’s see if the Rincon 3 is more Harry Styles or Gallagher. Take a front-row seat.

THOMAS: The Rincon has been an interesting line. For many, the out-of-the-box feeling is joy-inducing, but like a wave on the Rincon beaches in Puerto Rico, the feeling can come crashing down. Like Robbe said, our biggest knock on the previous versions is how quickly the soft bounce of the midsole died out, leaving the shoe feeling flat. So does the Rincon 3 hang ten in the barrel or does it wipe out on the reef? Let’s find out.

MEAGHAN: The guys have mostly covered our issues in the past, while talking about other stuff that seems irrelevant. You don’t need any more nonsense from me, so let’s get to the review. ROBBE: For freakin’ once, we actually get the best colors of a shoe first. Thank you, HOKA. Both the “blazing orange/fiesta” and “phlox pink/atlantis” colorways of the men’s and women’s (respectively) shoes are absolute California dreamin’, and dropping on 8/1 with plenty of summer left to spare.

But how does it perform? Well, it’s lost almost an ounce over last year’s version, and while HOKA brags on bringing the weight down, it’s actually about the same as the first version. Which is wild, because we didn’t realize last year’s version weighed that much.

For the Rincon 3, HOKA basically stripped down the upper a bit and added more laser cuts in the outsole to save some weight. It works, mostly, and nothing is lost in the feel of the shoe in terms of the ride. Personally, I would’ve liked a tad more structure, but let’s save that for later.

The initial ride is smooth as butter, which is why people love this shoe to death. And to death, I mean 150 miles in. HOKA really wanted to improve the durability but putting extra rubber onto the outsole of this guy, and I commend that for that. To be honest, I’ve only gone like 25 miles in the shoe total (and I definitely won’t be seeing 150 in it cause we’re swamped with shoes), so nothing is lost on it yet.

Breathability is on point with the lighter upper. Fit and feel of the upper are good (not great for me), but pretty similar to last year. The asymmetrical tongue is… whatever. I don’t care about it either way, though it is not gusseted.

THOMAS: Whoever is doing the color combos over at HOKA deserves a raise. The shoes out of the box are exciting and unique. When we posted some group shots on Instagram, even though the Rincon 3 wasn’t the focus, people wanted to know about the bright tropical shoes. Presentation is important and these shoes are attention grabbers.

The clean design of the upper fits my narrow high-arched foot extremely well without much in the way of overlays. The engineered mesh is vented for breathability and feels sock-like. The tongue is thin, similar to what you’d see in a racing shoe. I’m able to get a secure fit with the lacing without the puckering that I experience in trainers with overly-wide toe boxes. The gently padded collar and heel counter provide comfort and a good fit. The upper is one of my favorite fits this year – light, breathable, and just fits my foot right.

HOKA ONE ONE said they changed the midsole foam in the Rincon 3 and the foam is more similar to what is used in the latest Clifton, but I am not sure what that change is. With over 50 miles in the Rincon 3, it still feels good underfoot. I plan to put on more miles to see how it holds up over 100 miles. I’m hopeful so far. The ride is soft with a fairly flexible toe-off on the 4 mm drop platform.

In the HOKA world, I would say it is somewhere between Clifton and Mach 4. Rincon 3 has the softer feel of a Clifton with the responsiveness of the Mach 4. It’s light at 7.75 oz/ 219 grams for a US size 10. With the cushioning and weight combo, the Rincon can handle comfortable daily miles, faster workouts, and even race day miles. The outsole has rubber where you need it, the exposed foam will show some wear, but it is cosmetic and does not affect the durability of the Rincon 3.

MEAGHAN: As Thomas noted, the aesthetics of the HOKA Rincon are on point. The women’s colorway has real watermelon vibes with a bright pink upper and thick, green midsole. The upper material is a breathable mesh that’s pretty simple in design. The tongue is thin, with just a touch of padding where you cinch down the laces. There is some light padding around the collar and heel, and HOKA thinned out the pull tab in the back. It’s basically just a string now, which is fine I guess… I haven’t used it.

Moving on to the midsole. The foam has changed to something closer to the latest HOKA Clifton, but I didn’t notice a huge difference. Maybe a touch softer than the previous model, but it still feels a bit firmer than the Clifton. It’s a comfortable ride and feels light and relatively fast out on the road. The Meta-Rocker creates a smooth transition and adds some pop to toe-off. I’ve been enjoying the miles in this shoe quite a bit. ROBBE: The only minor negative I have is that I’d maybe like a bit more structure to the upper. I felt that my left foot was coming over the medial side, but it could’ve just been a production thing. It really wasn’t a huge deal, but I do think I preferred last year’s upper over this year’s version.

Make sure you secure the tongue through the middle because it slides the whole way down if you don’t.

If the durability is improved, then that’ll be a huge positive because I really don’t have anything else.

THOMAS: So far I can’t find a negative here. As long as the midsole holds up over time, I have another model in contention for daily trainer of the year. The only turnoff for some runners will be the lack of structure.

MEAGHAN: I don’t have much to complain about either. If the foam can hold up, you’ve got yourself a winner with the Rincon 3. HOKA ONE ONE Rincon 3 Conclusion

ROBBE: I will say, this is a $115 shoe in a lightweight package with a fair amount of responsive cushion. With the new Bondi X coming in at $200, be happy you’re getting a HOKA shoe at this price point. But the fact is, no matter how much durability has improved, this just isn’t a shoe that’s supposed to feel amazing mile 0 through 400. That said, you’ll get a lot of good out of this shoe before it becomes pedestrian, and that alone is probably worth it.

THOMAS: I really enjoyed getting miles in on the Rincon 3. It’s one of those shoes that if I could only have one trainer for all my running needs, the Rincon 3 might be my pick. I would compare the Rincon 3 to the ASICS Novablast 2, Brooks Hyperion Tempo, New Balance Beacon 3, and the Atreyu Base Model. The Rincon 3 can still hang ten in the pipeline and can shred the miles in lightweight comfort. It’s a good shoe for a Quimby, Kook, Barney, or a seasoned pro.

MEAGHAN: I agree with Thomas that the Rincon 3 is a versatile shoe. It’s great for easy days, long runs, and even picking up the pace for those tempo run days. I have a feeling this shoe is going to have a prominent spot in my rotation throughout the summer. If you like the previous Rincon models, you’ll be happy with the latest iteration. Definitely snag a pair on August 1st.

You can pick up the HOKA ONE ONE Rincon 3  (in all colorways) for $115 at Running Warehouse (featuring free 2-day shipping and 90-day returns) by using the shop link below.