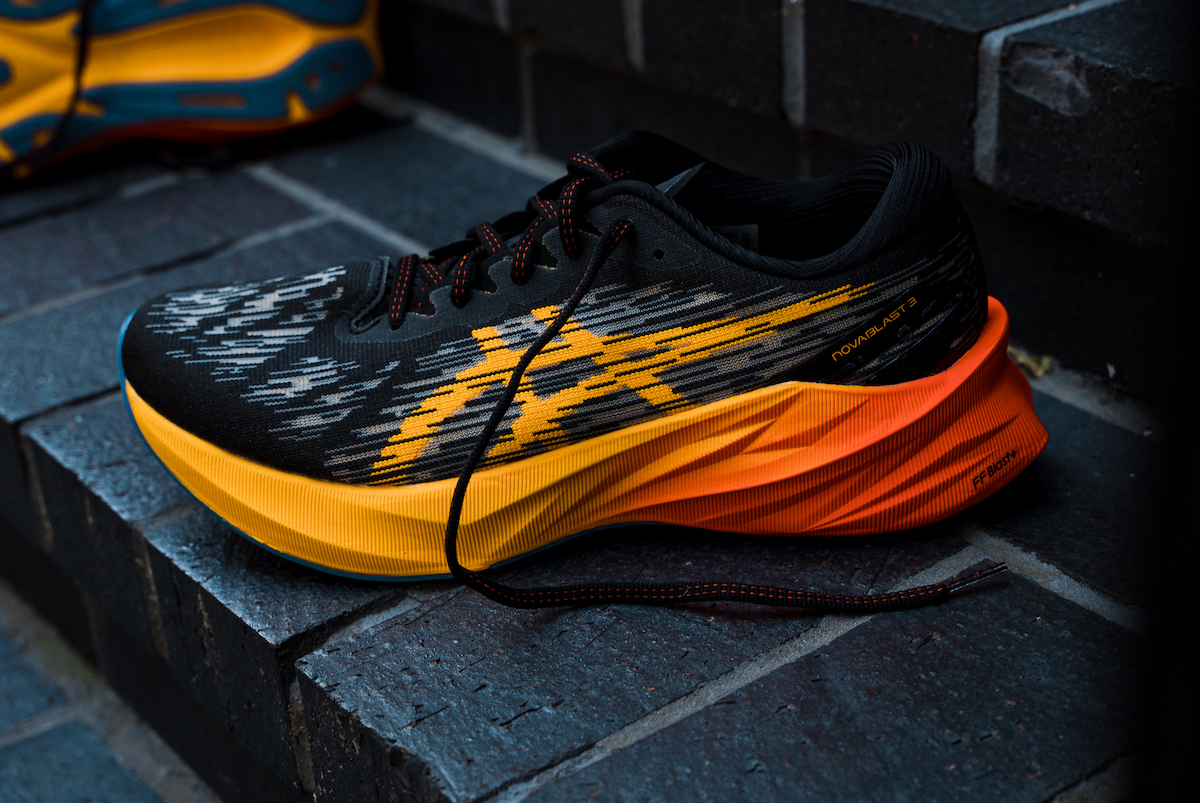 Pandemic time is a whole weird thing, ‘cause I could’ve sworn the last version of this shoe came out two years ago. But nope, according to our review from last year, it’s been a mere twelve months since the Novablast 2 bounced into our lives.

A year and a half before that, we saw the first version of this shoe at The Running Event, and it caught our eye with its wild midsole design. At the time, Asics said it wasn’t a running shoe. We said they were wrong, and the rest is history. The Novablast has proven to be one of Asics’ best offerings and one of the best daily trainers in general. A bouncy midsole combined with a smooth ride has made it a shoe that can go the distance, the perfect complement to whatever training cycle you’re in at the moment.

And while some people may have expected this to come in June (as the last two versions have), this version is slated for September 1. But enough history, let’s talk about what’s changed and why you should be excited for what will likely be one of the top daily trainers of the year. At first glance, not much seems to have changed, but if you look under the hood, there are plenty of significant tweaks. While the midsole has the same familiar geo-prism (or whatever) design that has become standard in the Novablast, the compound itself is improved. Instead of Flytefoam Blast midsole found in the Novablast 2, this version features Flytefoam Blast+, a lighter and bouncier compound that has already provided one of our favorite rides this year in the Gel-Nimbus 24. The stack height (not counting outsole and insole), is 31 mm in the heel, 23 mm in the toe. With outsole and insole, it’s in the 38 mm stack range in the heel.

The shoe also lost nearly an ounce of weight in a men’s size 9, now coming in at 8.9 ounces. A lot of this was siphoned off the upper which is more lightweight and breathable (but maybe not quite as plush) as past versions of the shoe. It also looks like the amount of rubber has seen a slight decrease over last year’s version, which would also explain the weight reduction.

We were a bit mixed on the “digital glitch” pattern of the upper, but it seems to be a big hit with our Instagram followers, so it looks like Asics made the right decision. Where’s there’s smoke, there’s fire, and this upper has both.

Our first run in this shoe was quite enjoyable. The same bouncy sensation we came to love in the last two versions of the Novablast is even better with the Blast+. The upper seems to be a bit more accommodating, but it still offers a good fit. Of course, it feels even faster and more nimble after losing an ounce of weight. Not sure if it’s #widefootfam approved, but hopefully we see a 2E version of the shoe somewhere down the line. If it offers all of this with the same workhorse mentality as the last version, then you can expect to get at least 300-400 miles, no problem.

Right now, we only have one pair, so we’re holding off on a full review until the rest of the team gets it in. While we’re not gonna toss around titles like “best daily trainer of the year” just yet, we can definitely say it’s on the right track for a podium spot. Point being– get excited.

The only bummer is that it was originally slated for a June release, but is now being pushed to September 1. By now, you should be used to shoes coming out three months after their projected release, so hopefully that’s not too much of a letdown.

Lastly, the shoe will sell for $140, a slight increase over last year’s model.