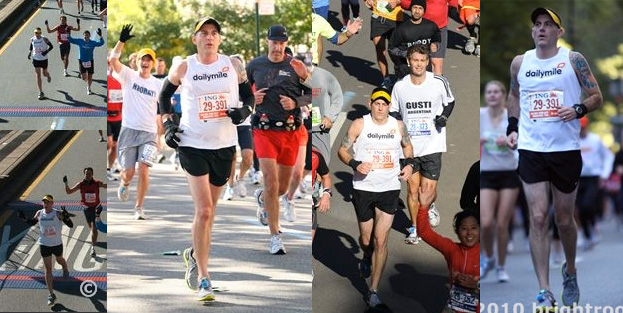 For those of you that like to flip to the end of a book, I will give the results first:

First, I want to thank all my friends online and off that supported me on this run.  I really do feel your encouragement when I am running and think about the well wishes that you thoughtfully took time to send.

The trip up to New York started out Saturday morning.  We left from Whitemarsh, Maryland on a Megabus.  About two hours into the ride the bus driver pulled the bus off to the side I-95, got out and started barfing.  He got back onto the bus and drove another twenty minutes before he pulled over again to resume the barfing. (barfing is a fun word that I haven’t used in awhile)  We then pulled off at a rest stop about 45 minutes from the city where we waited for a replacement driver for two hours.  During that time a woman with a strong Jamaican accent started yelling at the driver that he should keep driving.  She also kept repeating “This feels EVIL.”  We eventually made it to NYC, grabbed a slice of pizza and headed to the expo.  The expo was a little disappointing.  Chicago’s expo was pretty great and it set the bar pretty high.  I really thought that NYC was going to blow Chicago out of the water.  It didn’t.  To be fair it was the last few hours of the expo.  People were tired and the booths were run down after 40,000 plus visitors.

Cindy and I went to an early dinner with our good friends Juda and John McGannon at a little Italian restaurant, Pomadora Rosso.  The food was very good.  I had a salmon vegetable and pasta dish.  Next stop bed then getting up early for the bus.

The alarm was set for 4:30 a.m.  I was up and ready to go.  It was cold out, in the 30’s F.  I had my layers of clothes that would be shed and left for volunteers to donate.  I walked to the bus pick-up at 42nd and 6th Ave. and was loaded up almost instantly.  Getting to the village was a bit confusing.  It was still dark out so I just followed the other runners to a Dunkin Donuts tent and enjoyed the free coffee.  There were tents filled with people like some bizarre refugee camp.  I laid down and waited to hear from Juda and John.  They made it to the tent and we began the long wait until start time.  We made friends with an Englishman that lives in Brooklyn named Martin Rowe, he was a nice witty chap.  About an hour before my start time I headed to the starting corral.

It was a little chaotic, the instructions from the waiting area to the corrals were not good.  There was a lot of confusion.  When I got to my gate there was some shouting and pushing going on.  It turns out people had arrived late for their wave and were blocked out from getting in to that wave corral.  It boiled over and a couple French guys bum rushed the gate attendee and completely toppled him head over ass.  While that happened others pushed their way in and yet more people broke in by busting a gate open.  It was a little crazy but peace was restored.

I was now in the corral pressed tight with the 2nd wave of runners.  A very chilly wind was blowing when we started to move toward the starting line.  Once there a few minutes of waiting around, a speech to spur us on crackled over the P.A. system, and finally, a cannon went off and we were running.  It was hardly as crowded as I thought it would be.  It seemed like it was going to be a great day for running.  The sun was out and the air had a nice chill to it.  At first I was running just to get warm.  My pace seemed effortless and I was surprised how quickly I made it to the three mile mark.  I used Caleb Masland’s mantra “smooth equals fast” and I was pretty, pretty, pretty smooth.  It gave me confidence that I would later regret.

The NYCM had the best aid stations I have experienced in my 10 marathons.  There were so many water and Gatorade aid stations you could skip one with confidence that another one would be right around the corner.  The crowd support was awesome as promised.  I made it to the half way point in relative ease, I was full of hope that this was going to be a banner day.  Then all of a sudden around mile 16 going over the bridge I started to hit the wall, first physically, but, more importantly mental.  This began the toughest ten miles of mental torture I can remember.  I really did a number on myself.  I was mad that I ignored common sense that tells you to go out at a reasonable pace and build speed over the miles.  I felt fooled by what seemed like an easy performance on a difficult marathon course in Baltimore three weeks earlier. (3:45 PR)  I realized limitations in the middle of a race and that is a tough place to take a lesson.

The whole show started to crumble in the last 4 miles.  Physically I was giving it everything I had.  I was doing my best and leaving nothing on the course.  I was also having to take short walk breaks on wobbly, beaten legs.  I was so close and could not muster the energy to move my ever tightening legs.  I now was thinking about what Steve Speirs says “BYB” (be your best) and it helped a little.  Gassed and beaten I willed my feet to give one last mile of running to cross the finish.

OMFG! This was the longest post finish march! 100 yards to the space blankets, another 100 yards to get the medal, bag drop was a mile away!  I had to stop my legs totally cramped.  I was escorted to the medical tent.  They rubbed my legs out and I was discharged to continue the death march to bag pick up.

I ran the TransRockies! 118 miles 25,000 feet of elevation, and my legs never cramped up.  NYCM kicked my butt and I felt responsible for it too.  I did not play this one smart.  I thought maybe I was holding myself back and that there actually was a faster marathoner in me.  That maybe if I ran faster and tried harder that would be enough.  This was a great learning experience and I take away a real respect for proper expectations.  My next marathon I will go out with a better pacing plan.  Did I enjoy the New York Marathon? No and yes.  I hardly noticed my surroundings in the mental state I was in.  I do love the experience I gained from running the NYCM.  Purely on logistics, waiting around in the cold for 5 hours before you start running sucks.  The finish line march of death was less then fun, however, I would recommend every one run it.  After all it is the New York City Marathon.  You kinda have too.  I will leave you with a quote from NYRR president, Mary Wittenberg “the great thing about running is how much it means to every runner, how it transforms lives.” Believe in the Run.

Special thanks to Caleb Masland that helped me figure out my marathon training, (It’s not his fault I went out too fast)  Michelle Jacobs for hosting a dailymile meet up that I arrived to late to attend, Juda and John for being there and being friends, my in-laws Jace and Mead Slaughter for watching Theo while we were in NYC.  Lastly I want to thank my wife for being the biggest cheerleader and best support any runner could ask for.  She came up to NYC with me pregnant, sick, and tired just to be there for me.  I am a lucky man.  Thanks Cindy.

The Drop E108: Jay Dicharry, Founder of Mobo Board