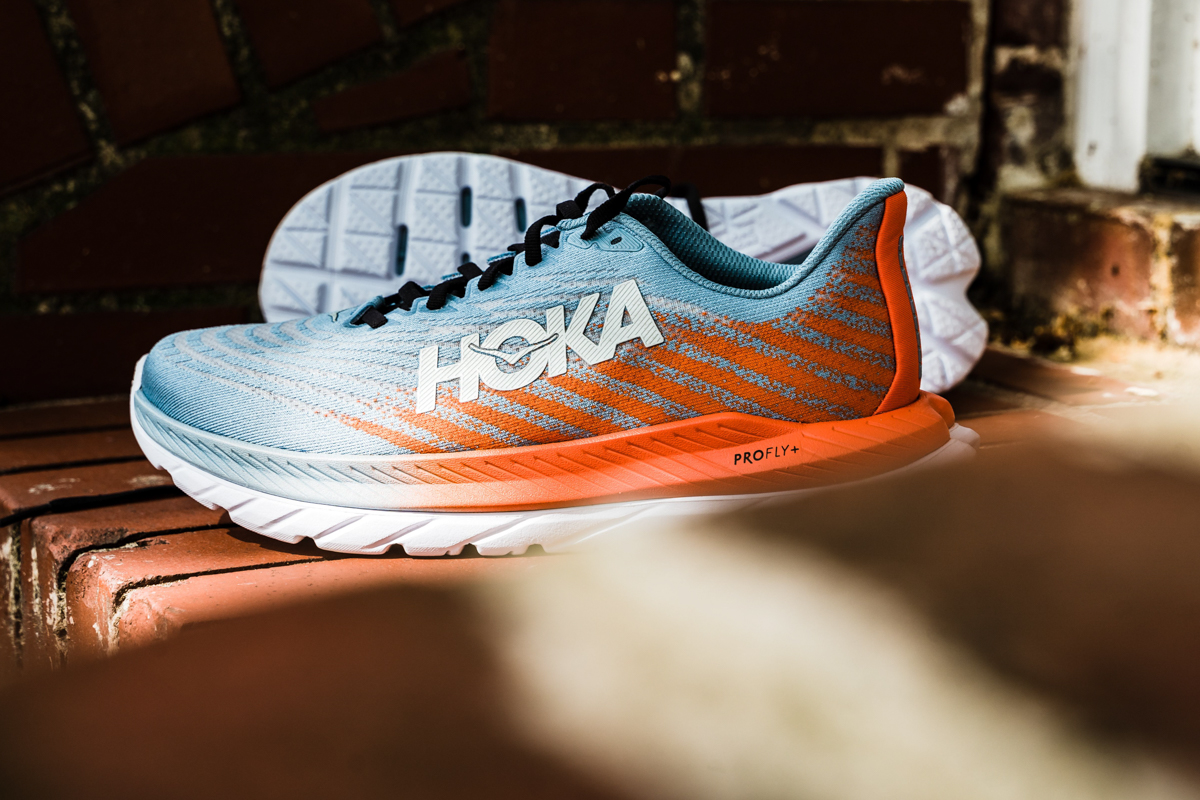 THOMAS: My relationship with the Hoka Mach line has been a roller coaster ride. We’ll skip Mach 1 through 3, which aren’t worth mentioning, and are basically the part where you’re sitting there waiting for the coaster to blast off. Let’s jump straight to the exciting part of the ride. Our team loved the Mach 4 when it came down the tracks in 2021, mentioning it in our B.I.G. Awards as one of the top daily trainers. It was even a hit with runners at large, though some felt it was overly hyped.

We’ve been knocking Hoka’s lack of innovation with its foams for a while now, so we got our hopes right up when we heard about the Mach Supersonic and its Supercritical ProFly+ midsole at the end of 2021. As you probably know by now, the shoe itself dashed our hopes. The formula wasn’t quite right, leaving us feeling cheap, blocky, and flat.

After that, I didn’t have high hopes for the Hoka Mach 5 (Go, Speed Racer, go!). Instead, I wondered if Hoka would shrink back into its regular EVA shell for safety. Despite the heights reached with the Mach 4, the Mach Supersonic weighed heavily on my mind. Any guesses about how this one goes before we get into it? Why didn’t Speed check the trunk to make sure Sprite and Chim-Chim weren’t stowed away?

Here are some of the need-to-know specs on the Hoka Mach 5. The upper is a lightweight creel mesh with a lay-flat gusseted tongue and thin pillows where the laces apply pressure. The stacked midsole has an improved formulation of ProFly+ on top of a rubberized EVA foam with a 5mm drop. The Mach 5 is intended to be an uptempo trainer with a snappy ride. My US M10.5 weighs 8.5 oz (242 grams).

Let’s move to the review.

MEAGHAN: Much like Thomas, my love of the Hoka Mach started last year with version four. It’s a fun ‘uptempo’ shoe that still looks and feels like your traditional Hoka, but with a little more pop. Hoka may have won me over with the all-white colorway before I even laced up the shoe, but the new and improved formulation of ProFly+ is the real star here.

LINDSAY: I’m going to start this off with a shoutout to my dad, who can now say, “I told you so.” He’s a die-hard Bondi fan going on about four years now, and every time we talk about running shoes, he tells me to give Hoka a try. Like the stubborn teen he knew 15 years ago, I never took his advice. For whatever reason, I thought all Hoka shoes had too much cushion and that they’d made me look weak as a road runner.

Boy, I was wrong. I love the Hoka Mach 5. I haven’t stopped running in it since I got my pair because I truly enjoy the ride and look forward to each go around the city. I’m writing this after my Sunday long run and have yet to take my shoes off. Literally, they’re on my feet right now. I also took an unplanned nap in the Mach 5 the other day after a run. Not sure what that says about me, but it says something for Hoka’s comfort. Let’s get into more of the good stuff. THOMAS: In the first quarter-mile of my first run in the Mach 5, I mentioned to Meaghan, who was also wearing the shoe, “Damn, I think I’m going to like these.” We cruised a familiar route, enjoying some unseasonably cool Mid-Atlantic weather. The trainer’s stacked midsole felt fantastic. As my foot landed, the Profly+ took the brunt of the impact and responded with a bouncy sensation. The rubberized EVA adds stability and rigidity, while the soft feel of Profly+ layers on for a snappy ride. In subsequent runs, the higher temperatures gave the Profly+ a different feeling. One run in 90-degree humidity soup made the Profly+ feel extra squishy. The stark change makes me think that the foam is sensitive to hot and cold and may provide a different ride in the extreme climate swings. At least the rubberized EVA has held up well and provides surprisingly good traction.

The toe box is roomy, the shoe saddle locks down over the arch, and there was no heel lift. I also feel like the minimal tongue adds to the performance feel. It’s not a surprise that I had to cinch the laces down on my narrow foot, but I was surprised that Meaghan, with her wide feet, also cranked her laces down. Even with the lacing, the shoe’s upper disappeared on my foot.

Oh, and I absolutely love the colorway I got to review. It has some serious 90s styrofoam cup vibes to it.

MEAGHAN: The Mach 5 feels as dreamy as it looks. The Profly+ is soft and responsive, and paired with a firmer EVA below, you get a really great ride. From walking around to post-run strides, this combo provides a comfortable, bouncy ride no matter the pace. The forefoot is roomy enough for my toes to spread out, and flat laces provide a solid lockdown. The light padding through the collar and heel added to the overall comfort, and I didn’t have any issues with rubbing or hot spots.

LINDSAY: Who doesn’t like a nice white running shoe? Pair that with a few copper hits, and you have one of the sharpest colorways I’ve ever seen. The upper is a single layer of mesh that keeps the shoe light and breathable. Compared to the Mach Supersonic and Mach 4, the foam midsole has more volume and a slightly wider footprint, but it still feels lightweight and springy. This version has much more snap, crackle, and pop than its predecessors — two thumbs up for the upgraded ProFly+ foam.

Coming off a mild ankle sprain, I was grateful for the rubberized EVA foam, which absorbed much of the impact. Despite my high road mileage, I feel like the platform offers plenty of durability for the GRIT miles to come. Although it’s considered a daily tempo trainer, I was able to take the Mach 5 out for long runs, speed workouts, and hill sessions where the shoe held its own with each workout. I enjoyed the high energy return and smooth ride each time. THOMAS: Hoka may have designed the Mach 5 for uptempo running and racing, but I feel it fits better as a daily trainer. It’s not necessarily a bad thing, just different. Either way, it’s a damn fine lightweight trainer.

MEAGHAN: I think I crave more cushioning and support when talking about the long run days (15+ miles). Other than that, I don’t have anything negative to say.

LINDSAY: Ok, Hoka, cover your ears. I have to point out a few faults, but none of which would deter me from reaching for the Mach 5. I know I talked up the colorway, but after 30 miles, the white upper started to look a little dirty. The copper stitching only contributed to that look rather than sparkling like it did out of the box. The black colorway I’ve seen gives off zebra vibes that I’m not here for either. If you get the black colorway and feel like you’re riding a zebra, don’t worry because the laces are so long that you can securely strap yourself on for the ride. Two times over. Moving on.

The first time I put the Mach 5 on, I noticed it was a little on the long side and left some extra room in front of the toes. I wasn’t sure how that would come into play, but I’m happy to say it didn’t bother me. It may be worth going a half-size down if that sort of thing grinds your gears. The tongue is thinner than the Mach 4, and it’s missing most of the plush compared to the Mach Supersonic. It also comes up higher on the ankle, but I didn’t notice any rubbing. THOMAS: The Mach is bach (i.e. back)! We’ve already included it in our Best of 2022 Daily Trainers (So Far), which it more than deserves. The shoe put a smile on my face every time I ran in it. The Mach 5 is light, snappy, and comfortable — a hard combo to knock. We’ll continue to put miles in the shoe to see how the foam holds up, but I strongly feel the new ProFly+ will add longevity to this comfy trainer. Other shoes that I’d compare it to are the ASICS Nimbus 24, Glideride 3, the Puma Velocity 2, New Balance Rebel 2, and the Nike Pegasus 39.

MEAGHAN: The Hoka Mach 5 has become one of my favorite trainers as I’m starting to base build for the fall marathon season. It’s light, comfortable, and provides just a bit of pop. If you’re looking for a shoe that works for those easy hour days that can also pick up the pace, the Mach 5 is a great option.

LINDSAY: Like father, like daughter. I might be Hoka’s newest fan, thanks to the Mach 5. It’s responsive enough for speed workouts with enough cushion for longer runs. All that for $140? Sign me up. I’d recommend this shoe to anyone looking for a balanced road runner. It’s a considerable upgrade from the firm stepchild that was the Supersonic while holding on to the favored features of the Mach 4.

You can pick up the Hoka Mach 5 for $140 at Running Warehouse (featuring free 2-day shipping and 90-day returns) by using the shop link below.