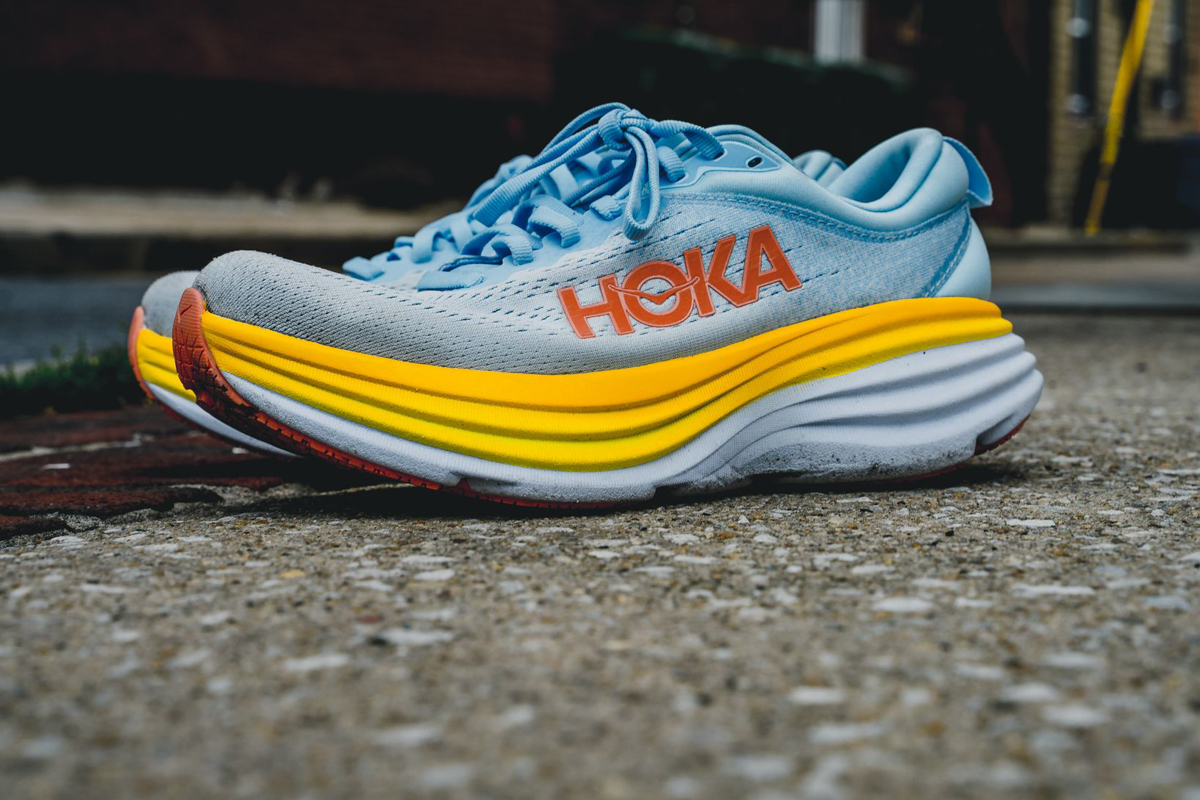 THOMAS: Let’s take a journey back through time, perhaps to a more primitive part of our history. A time when the running world was filled with chia seeds, running sandals, and Vibram FiveFingers. We were told that running naturally would cure us of all injuries and strengthen our tendons and muscles so that we could run like humans were meant to run. Not long after this golden age of “natural” running, I snapped my 3rd metatarsal during the Charleston Marathon. I finished the race (3:29) but lost out on going to South Africa to run Comrades as I was in an air cast — a boot — for five months.

After healing up, I came to appreciate cushioned trainers. That’s when I received a shoe that, at the time, looked insane: the Hoka Clifton. The Hoka Clifton seems pretty standard nowadays, but when I cracked open the box, I thought it was a joke. But like Morrissey melancholily crooned: “That joke isn’t funny anymore.” The overstuffed midsole looked comical but felt amazing. It was incredibly light and the rocker shape was novel back then. The Clifton became my favorite running shoe. Then, Hoka changed the industry forever with its big brother model, the Bondi. Suddenly, these new, relatively lightweight, well-cushioned shoes were helping runners go farther and recover faster and proving that natural running kind of sucks (sorry Xero and Vibram).

I never liked the Bondi quite as much as the Clifton — it never felt as light or responsive. Instead, it’s a shoe I would use for recovery runs and days when I felt my legs could use some TLC. Unlike Meaghan, who could pick up the pace in the previous Bondi models, the shoe could only go so fast on my feet. I felt like it limited the shoe in my overall training rotation. The Hoka Bondi 8 feels a little different. I guess people who want a Bondi for pure cushioning plushness will be a little disappointed with the update, but for those who want a more responsive ride, this might be the Bondi they’ve been waiting for.

MEAGHAN: As someone who loves a well-cushioned shoe, the Bondi has always been one of my favorites. It’s the most cushioned model of Hoka shoes, and it’s been a staple for those easy recovery days. But now that most brands have their own max cushioned shoes, it’s hard not to look at the Bondi under a more critical lens.

At first glance, the Hoka Bondi 8 looks similar to its predecessor. The mesh upper, flat laces, padded collar, and super thick midsole are all very familiar. After lacing it up, there are some apparent changes (and they’re all pretty great). Most notably, the midsole finally offers a softer, lighter foam. The shoe’s base is wider, and Hoka extended the heel for a stable, smooth ride. There’s extra padding through the tongue, too, which helps to reinforce those plush Bondi vibes.

ADRIENNE: It’s hard to believe that the Bondi is already on its eighth version, but it’s also hard to believe the Bondi is only on its eighth version. Time is weird on the memory sometimes. I remember the first time I laid eyes on the moon boot-ish behemoth at a running camp several years back. I said that I’d never be caught dead wearing the Bondi. Well, fam, I’m about to eat my marshmallowy words. The shoe that started it all for Hoka continues to show why it’s so beloved.

This was my first time trying the Bondi, and like Robbe in a review of an earlier edition of the shoe, I fully expected to hate it. I didn’t. I was caught off guard by how it just rolls down the road and seems to run lighter than its weight. It even looks fantastic with a revamped upper and comfortable midsole (one of my biggest selling points) and holds the foot well. The Bondi 8 also uses recycled materials in the upper. Hoka continues the tradition of the 4mm drop with a stack height of 31/27mm. I’m at least 5’6″ in this shoe — a useless benefit of wearing thicc bois! Besides the apparent protective quality of the resilient foam midsole, there’s a nice, light sense of rebound and smoothness to the Hoka Bondi 8, and it works well as an easy/recovery day shoe. In a super-saturated market, having an identity and doing it well is key. THOMAS: I’ve described the Bondi in the past as being too gushy. I think I called it “running in sand” in a previous review. The new foam in the midsole is lighter, but it is also firmer. The wider base and extended heel help the move through the stride, while the firmer feel adds a touch of quickness. Under the foam, there’s plenty of rubber for sure footing and durability. The mesh upper breathes well enough and fits my narrow foot well. The tongue sort of has a gusset? There’s elastic on the medial side, which keeps the tongue in place. I guess it works cause I never had an issue.

The design of the shoe is my favorite of all the Bondi. Give the designer a chef’s kiss from me.

MEAGHAN: The only complaint I had about the Bondi 7 was the weight. Good news, the updated EVA cushioning and upper construction took this shoe from 9.2oz to 8.9oz for a US W7.5. While that’s still not super light, it’s a shift in the right direction.

I’ve been enjoying the new lighter foam compound. The ride feels smooth, and the extended heel adds to the rocker geometry that keeps you effortlessly striding along.

I’d be remiss not to mention the colorway (I received the Summer Song / Country Air). Hoka continually crushes in this category, and I wish more brands would follow suit with these all-white and pale pastel colorways.

ADRIENNE: Aw, man. A lot of the good is already explained above, but I was surprised by how smooth and enjoyable the ride is. I fully expected the Bondi 8 to feel heavy and almost like running through peanut butter (the processed, thick kind), but instead, I didn’t have to think much or exert an unusual amount of effort on runs. The cushion to weight ratio is good, and easy runs still felt easy despite the scales tipping at close to 9 oz.

Also, styling for the Bondi line continues to improve, and I wouldn’t mind being seen in public rocking it. The wider midsole adds some natural stability, too, which is nice. Also, it wasn’t bad for me, but the narrow fit will probably have some people grumbling.

MEAGHAN: While the base of this shoe is wider, it feels like Hoka reduced the overall width and volume of the upper, particularly in the forefoot. I had issues with rubbing on the inside ball of my foot where it was just too snug. I know that Hoka makes the shoe in wide, which I’d probably recommend to most people.

Since I’ve been spoiled with some more versatile max cushioned shoes, the Bondi feels a little less lively than I remember. It’s the perfect shoe for easy recovery days, but outside of that, it’s a bit too much shoe.

ADRIENNE: The sidewalls may be a little obtrusive to some. I noticed some rubbing on the outer part of my right foot in my first run, but fortunately, it went away — just something to watch for. Also, striders in the shoe suck, but I was expecting them to. THOMAS: I expected to be ho-hum on the Bondi 8. However, I like the update quite a bit, even with the weight. It isn’t as pillowy as some previous models, but it is more stable and feels smoother underfoot. If you want a super stack with lots of cushioning, there are a lot of choices out there now. Some shoes to compare are New Balance More v3, the soon-to-be-released New Balance SC Trainer, Nike ZoomX Invincible, Adidas Prime X, Saucony Triumph 19, and the On Cloudmonster.

Side note: The Bondi 8 does the job well for all-day walking comfort, too. I probably have as many casual wear miles in the shoe as I have running miles.

MEAGHAN: The Hoka Bondi 8 is the optimal recovery day shoe — perfect for those slogs after a hard workout or long run. While I had some issues with the snug-fitting upper, opting for the wide version should fix the issue for anyone with a wider foot.

ADRIENNE: Never judge a book by its cover. Or its size. A good shoe is a good shoe, and the Bondi 8 has its job locked down  — extensive protection with a pleasant roll and bounce. I stand corrected on my initial opinions of this hella comfortable shoe, and you just might see me rolling through recovery runs in the Bondi 8 moving forward. Say what you want about Hoka, but the brand knows who it is and continues offering solid updates.

You can pick up the Hoka Bondi 8 for $165 at Running Warehouse (featuring free 2-day shipping and 90-day returns) by using the shop link below.