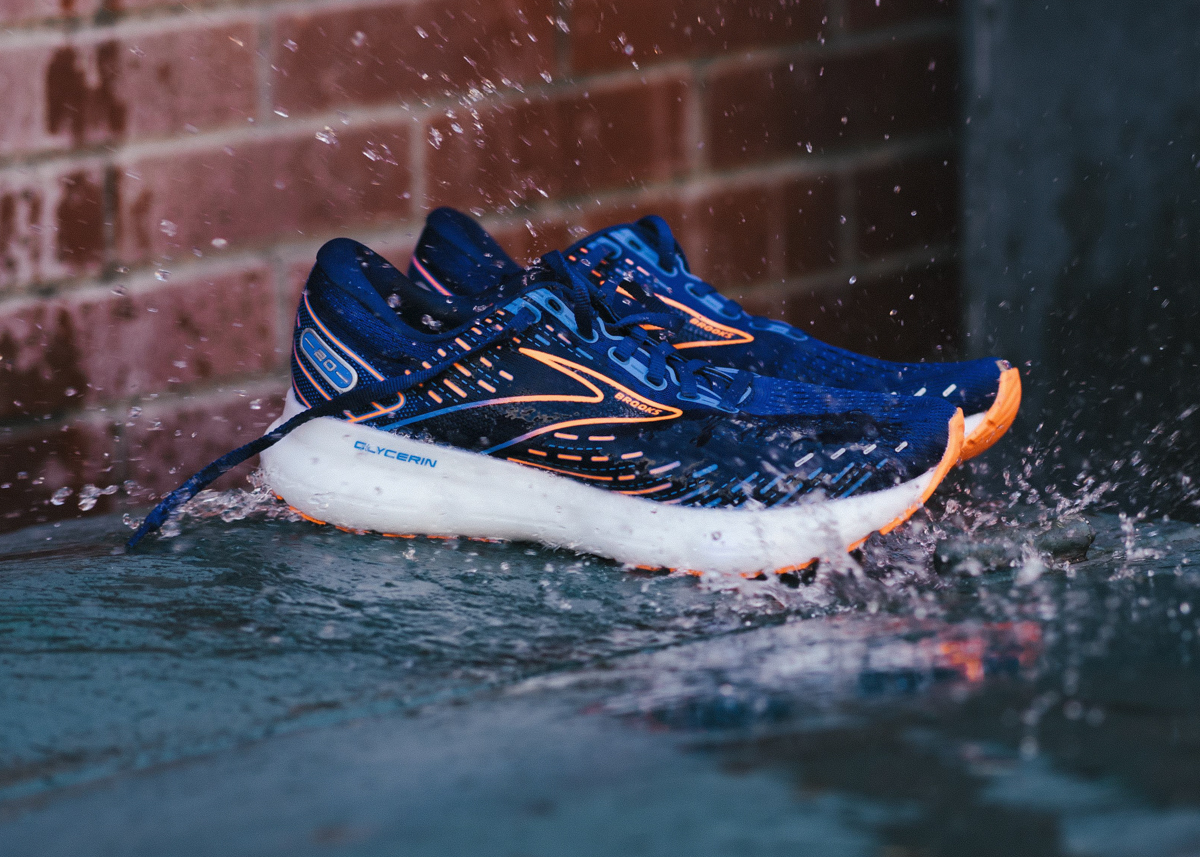 ROBBE: It’s not often that I get excited about a Brooks shoe. No offense to Brooks, who has been solving run shoe problems for runners everywhere at a clip unmatched by any other company. They dominate the running market with shoes that just work at a reasonable price point. Point being, nobody goes ‘ayooga eyes’ at a car lot of Hondas Accords. But sauce some things up under the hood and you could convince me to step into the showroom.

The Glyercin 20 gets that kind of an upgrade, with a full midsole of DNA Loft v3, the same nitrogen-infused foam found in last year’s mad scientist creation, the Aurora-BL. We thought that shoe was the best Brooks shoe in recent memory, so we were excited to see the Glycerin get a major injection of that same DNA.

So does the shoe have us twisted up in double-helix fashion? Is such a thing even good? Nobody knows, but we’ll try to explain anyway.

MEAGHAN: I’ve always associated Brooks with stiff, clunky trainers and typically opted out of reviewing them. But last year, they introduced the Aurora-BL from their BlueLine Lab, which totally flipped my perception of the brand. What changed? The Aurora-BL debuted a brand new midsole, DNA Loft V3. When I heard they incorporated this nitro-infused foam into the Glycerin 20, I was jazzed to give it a try.

RENALDO: I bought my mom a pair of Brooks shoes a few Christmases ago. After hearing a lot of great things about them while shopping for some myself, it became “a name you could trust” at every running store I went to. I associated the Brooks name with being reliable, comfortable, a real sure thing (only the best for my momma, y’all). This was my first outing with Brooks, so I was pretty pumped to give the Glycerin 20 a try once I got the go-ahead to review them.

Should I have given my mom a gift receipt? Let’s find out. ROBBE: The good news is that this shoe got a significant weight reduction. Previous versions weighed a half-ounce more, so shaving that much weight is never a bad thing. Brooks knows a thing or two about uppers, and generally speaking, this airy mesh upper does all the stuff it promises. Fairly breathable but retains a significant level of comfort.

The DNA Loft v3 midsole is certainly better than the DNA Loft of old, which was an EVA-based foam. The nitrogen-infused Loft v3 is bouncier, but also… not bouncy (more on that later). It’s an upgrade, but not significant. It will definitely last for whatever you plan on running in the shoe. Combine it with the generous layer of outsole rubber that’s been redesigned for better transitions, and you’ll get your miles-per-money worth out of this thing, no doubt.

MEAGHAN: The Glycerin 20 is Brooks’ cushioned daily trainer, designed for all sorts of running, from recovery days to long runs. The upper is an airy mesh that’s light and breathable but comes with plenty of cushioning around the collar and tongue. It’s comfortable, with a great step-in feel.

As noted in the intro, the exciting update to this shoe is the new midsole foam: DNA Loft V3. This nitrogen-infused foam is light, bouncy, and never dies out. It’s Brooks’ softest foam yet, and easily my favorite from the brand. Beneath this responsive midsole is a substation amount of rubber coverage. The nice slab of foam (10mm drop) and rubber outsole combo will last hundreds of hundreds of miles. In terms of weight, my W7.5 came in just under 9oz. Not the lightest shoe out there, but also not the heaviest.

RENALDO: Designed to be super soft, the Brooks Glycerin 20 hits comfort right out of the park. Its breathable air-mesh upper feels like it’s not there once you put the shoe on. I thought it got even better combined with the satisfying smoosh of the nitrogen-infused DNA LOFT v3 midsole. It’s Brooks’ softest cushioning system yet, and the hype is real.

Seriously, I like to just stand around in this shoe.

Running in the Glycerin is just as comfy. A redesigned outsole with a much wider platform this year makes running effortless. It’s an easy wear for any runner, given the 10mm drop and 10.1 oz. weight for a US M9. Brooks clearly wants your time spent in this shoe to be the best part of your day.

I’m digging the colorway as well — it’s a combination of Blue Depths, Palace Blue, and Orange. The shoe has just enough pop to keep it eye-catching but just the right amount of blue to keep it subdued. Think of a majestic tiger lying in wait — tigers are still in, baby. ROBBE: For all the love we gave the Aurora-BL, much of that feel just doesn’t carry over into the Glycerin 20. I thought maybe it was just the day I ran, but after several runs in the shoe, it just feels flat. Light enough, for sure, which is an issue I had with the Glycerin in the past, but not the level of bounce and responsiveness I was hoping to get. To be sure, I’ve had much more fun in other nitrogen-infused shoes, like the Skechers Maxroad 5 (or really any Skechers running shoe).

The Glycerin 20 just felt blocky to me, with a flat transition. I suspect it’s due in part to the thick-ass layer of rubber for the outsole (good for durability, inhibiting for turnover feel). I can’t tell if I was just hyped after running in the Aurora-BL, but I can say it definitely does not feel like that shoe. Perhaps it was the over-abundance of Loft v3, or the decoupled heel that made the Aurora-BL feel so good. But on the other hand, the Brooks Caldera 6 trail shoe features the same slab of Loft v3 and our trail reviewers rave about that shoe. I also felt like there was a lot of room in the toe box and couldn’t get a great lockdown.

Honestly, I feel like I’m losing my mind because this is like the third shoe in a row where the lockdown sucks (looking at you New Balance 880v12). I can’t tell if it’s because all these companies have had to use different factories during Covid and the quality control is just not what it used to be, but everything is running roomy these days. Or too small. It’s a sad time to be the Goldilocks of shoes.

MEAGHAN: My first run in this shoe was 10 miles, and it felt great… until it didn’t. After about five or so miles, I started to develop a pretty gnarly blister beneath the ball of my foot, near the big toe. I tried to readjust the lacing mid-run, but that didn’t seem to help.

I waited another week or so and laced them back up (this time with thicker socks), but the same thing happened, resulting in an exponentially worse blister. I’m not sure what’s to blame, but unfortunately, the shoe just didn’t work for my feet.

RENALDO: Now, to hold all that comfort, you’re gonna need a lot of rubber. And that can make the Brooks Glycerin 20 feel a bit blocky at times. So much so that the firmness of the rubber can take away from the plush and bouncy feel of the shoe on certain strides. It doesn’t do anything acoustically for the shoe either. You’re certainly not sneaking up on anybody with it on. ROBBE: This isn’t a bad shoe. At all. But it didn’t meet the expectations I had. Which, to be fair, may have been set too high from the Aurora-BL. I do think it’s better than past Glyercin models and if you are a fan of the Glycerin then you shouldn’t have any problems with this shoe. That said, it doesn’t hit the same standard of other nitrogen-infused midsoles like the Skechers GoRun Maxroad 5 or the Puma Velocity Nitro 2, both of which I’d pick over this shoe.

MEAGHAN: I really wanted to love the Brooks Glycerin 20. The Aurora-BL was such a fun shoe to lace up, and I figured the Glycerin would be a similar experience. While I did enjoy the responsive ride and overall comfort, it just didn’t work for me.

RENALDO: The Brooks Glycerin 20 is a great shoe for someone that wants to go the distance with a lot of comfort. There’s tons of rubber on the outsole, so this may be the only shoe an intermediate runner would need on a recovery day or a long run. Unfortunately, this just wasn’t my thing compared to the other high cushion daily trainers out there.

You can pick up the Brooks Glycerin 20 for $160 on July 1 (tentative) at Running Warehouse (featuring free 2-day shipping and 90-day returns) by using the shop link below.