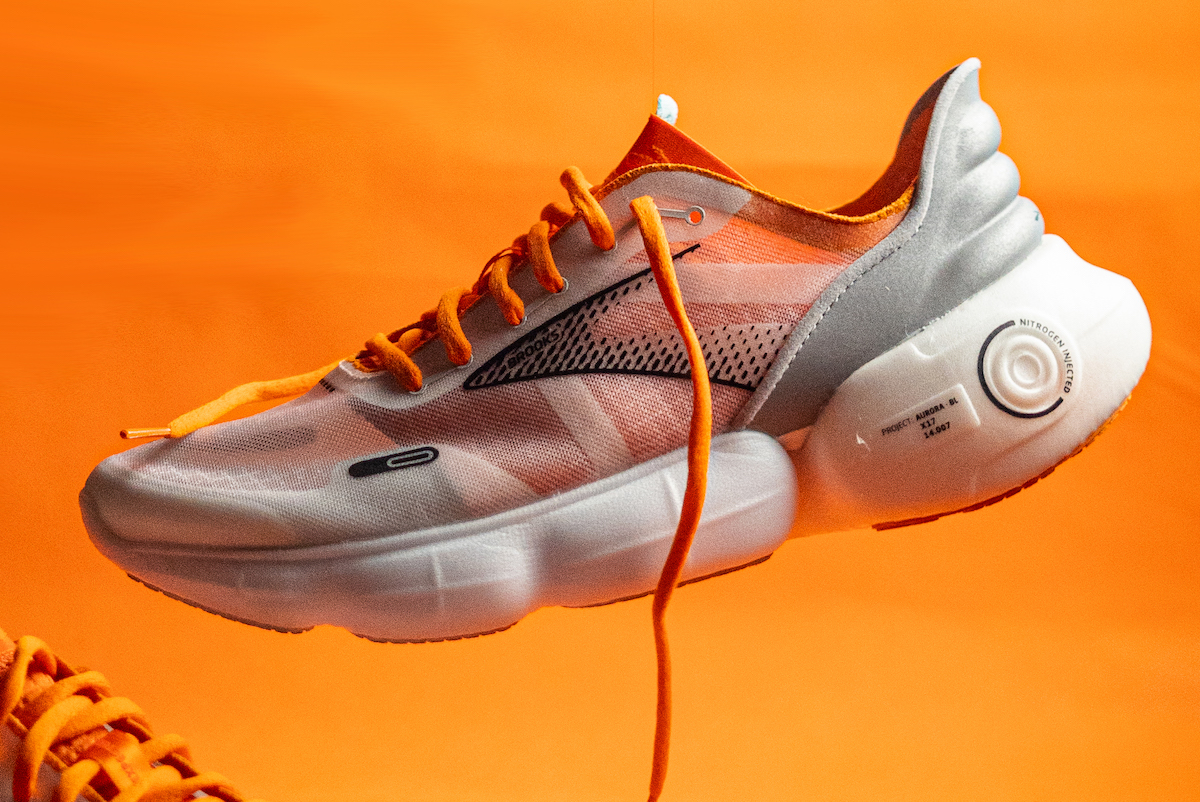 ROBBE: Do you want me to be real? I’ll be real. I don’t get super excited about Brooks shoes these days. Aside from the Hyperion line (and maybe the Catamount), it’s been a little bit ho-hum for me. Does it matter what I think? Of course not, because they still sell more running shoes than any other company out there (I’m just still sour that the Launch used to be good and now it sucks).

So when we were told they had something new and exciting coming from the Blue Line lab (their innovation department), I had some healthy skepticism. I was even more skeptical once they sent spec sheets over for the all-new Brooks Aurora-BL, a shoe that looked like an antagonist from a 1980s B horror film. A decoupled heel unit that looks like Mr. Stay Puft’s carcass after a battle royale with the Ghostbusters. A silhouette design reminiscent of the Brooks Neuro from five years ago. Was I looking at the future or just a lame attempt at imagining it?

Oh, the future is here, darling. And it’s weird.

(For a more thorough explanation of the Brooks Blue Line lab and the innovation that went into the Aurora-BL, head over to the Brooks website. After reading this review, of course.) ROBBE: Despite my initial misgivings, I gotta say, the Aurora-BL is a lot of fun. It’s lightweight, it’s chunky, but it’s oddly fast with a lot of fun pop-o-matic bounciness to it. The monomesh ripstop-style upper is light and see-through, and dare I say – kind of cool looking? It also has a crazy reflective heel counter that seriously shines like a holographic UFO. Mulder and Scully’s landline will be ringing off the hook once these shoes get out in the wild.

I also love the gusseted saddle action over the midfoot. You can really get some nice hugging going on there for a secure lockdown.

On the run, this shoe is … interesting. It looks like it should be used for slower paces – tons of cushion, wide stable platform, not exactly speedy looking. But it defies expectations in that way. In fact, at slower paces, I felt it was kind of clunky and not that enjoyable. But pick it up just a little bit or transition into tempo, and the nitrogen-infused DNA Loft v3 midsole really shines. The decoupled heel allows a nice transition, and if you’re a forefoot striker, you’ll love the ample cushion and pop off the front. It almost exists in a space between tempo and daily trainer (or maybe I just need to run faster).

I’m gonna say it and people might hate me – this is kind of what I hoped the Nike Invincible would be. The Aurora-BL has a high stack and can be a bit unstable, but nothing like the stack of ZoomX, that – while really really bouncy – is a bit all over the place if you got running chain issues. (That’s not Nike’s fault, it’s mine for being a lazy POS). On the other hand, the Aurora is just the right amount of stack, bounce, and firmness. It’s dialed in nicely.

My legs felt fresh after all my runs in the shoe.

Last thing – and you can argue with me – this shoe looks badass. It’s so ridiculous and wild that it actually works. You will get questions and you will be happy to answer them. Brooks, you did it – you made something really cool and interesting that actually works.

MEAGHAN: I couldn’t wait to take the Aurora-BL out for some miles. Between the marshmallowy-looking foam, giant stack height, and generally insane look – it couldn’t be bad, right?

Let’s dive into the upper. The tongue of this shoe is more like a sleeve. It’s stretchy and wraps around the whole foot. There isn’t much in the way of padding, but it’s comfortable nonetheless. The rest of the upper is made up of a thin monomesh that’s see-through and very breathable. When I looked down at this shoe, the design reminded me of the OG Skechers GOrun. Not sure if that’s a good or bad thing. Either way, the upper is fairly simple and it works.

Beneath the foot is where this shoe gets really interesting. The midsole is actually two separate pieces – one slab of foam in the heel and another in the forefoot/midfoot. This ‘decoupling’ of the midsole is meant to help with natural movement of the foot. I will say, the transition from toe-off to landing feels really smooth – so I guess it works. The actual foam, DNA Loft v3, I love. It’s nitrogen-infused and Brooks’ softest foam yet. It feels light, bouncy, and it never dies out. The perfect companion for a long run. I also found myself naturally picking up the pace in this shoe. I came home from several easy runs with an overall quicker pace than I expected.

THOMAS: Opening the spec sheet for the Aurora-BL I thought, “Oh jeez, here comes another gimmick shoe.” I had run in the Brooks Neuro that came out late 2015 with a decoupled heel similar to the Aurora BL and it was okay. Not bad, not mind blowing, just weird looking. (insert gram link) When I opened the box and held the Aurora-BL my first impression was: “This looks puffy, but feels really light (9.45 oz/270 g for a US M10.5).” It also has strong NASA vibes. My foot seems to like supercritical foams so I anticipated that the ride would be fun.

Robbe and Meg have covered the details, so I’ll dive into fit first. The mesh upper fits true to size and is cool ‘cause you can see your foot. Not only did my big toe have the right amount of clearance, but the descending toes also had lots of room to splay. The sleeve over the arch is comfortable and holds the foot securely over the midsole. I had no hot spots or heel lift. While on the minimal side, the upper works well and is quite breathable.

The midsole gives that cushioned but not dead feeling we have come to expect from supercritical foam. The unique decoupled heel serves an important role. While most high-stack super-cushioned shoes rely on a rocker to get the smooth transition from your stride, the Aurora-BL sits more like a traditional trainer. The decoupled heel separates to provide flexibility eliminating a clunky or slappy feel. The ride is more versatile than its pillowy look.

I did several runs in the shoe including a double-digit run that unintentionally turned into a progression. Where I thought the shoe would be relegated to easy days and recovery runs, the Aurora-BL feels lively when your pace increases. ROBBE: So, I felt my pair ran a half-size long, which is also the issue I’ve had with all the Hyperion shoes. If you’ve found it to be the same in those shoes, then go a half-size down. Not sure if Thomas or Meaghan had that issue.

The upper – while cool-looking – is a bit too “plasticky” for me. If you have wider feet or get big toes/pinky toe rubbage, it could create issues. Also, the laces are kind of pedestrian. Don’t overlook the laces!

Trust me when I say I was fully prepared to rail on this shoe. But seriously, it’s a really good shoe.

MEAGHAN: Similar to Robbe, I felt the shoes might be a smidge too long. I prefer my shoes on the larger (vs smaller) side, so no real issues, but something to note.

I also found that there was some heel slippage out on the run. While the upper and collar are very comfortable, it doesn’t provide the perfect locked-down fit.

THOMAS: My first thought was that the shoe looked futuristic in every detail except the laces. Other than that, the traction isn’t poor, but the exposed foam is hydrophobic and when you hit the wet stuff the shoe glides a little. Think pool noodle. Also, at $200 clams for a daily trainer, the price is a bit steep. But hey, it’s limited edition and people love scarcity.

ROBBE: If you want to treat yourself to something fun for surviving the last hellhole of a year, then spend your Biden bucks on this bombshell from the Brooks Blue Line, baby. Jump on it when it arrives on June 17 for $200, because it is a limited edition shoe and it will go faster than Marty McFly in an Elon Musk-designed 2021 Delorean.

MEAGHAN: Honestly, I’m surprised at how much I’ve been wearing this shoe. The Brooks Aurora-BL is a little crazy looking, but a lot of fun. While it’s on the expensive side, at $200, this shoe will definitely last hundreds of miles. If you’re looking for a fun daily trainer that will stand out in a crowd, this is your guy.

THOMAS: I enjoy this shoe. It’s novel and it works. I am constantly evaluating my top daily trainers for the year. Right now my list in no particular order is the Nike Pegasus 38, the New Balance 1080 v11, ASICS Novablast 2, HOKA Mach 4, and the surprise Brooks Aurora-BL. I’ve really enjoyed all the miles I’ve run in the shoe (many more than our average review period for a shoe), and will continue to put more into them this summer.