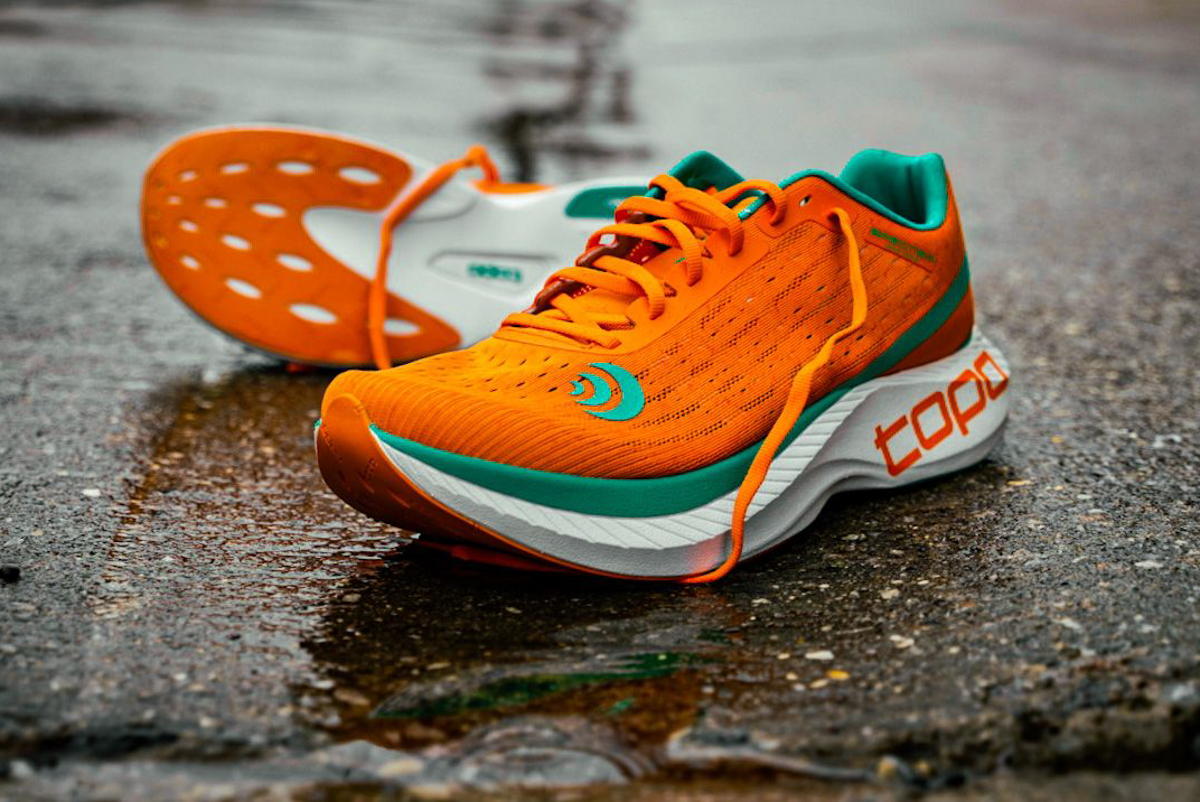 MEAGHAN: The Specter is a brand new shoe from Topo. It’s their high-stack, high-performance shoe, so I was excited to try it. For those unfamiliar with Topo Athletic, they’re all about performance footwear that encourages natural movement. Not zero-drop natural (though they have zero-drop shoes), but low-drop platforms with roomy toe boxes. So what does their first crack at a high-stack performance shoe look like? Let’s jump in.

RYAN: Meaghan has already given the shoe a proper introduction, so I’ll take the chance to question the whole naming setup.

Why do running companies insist on naming their shoes after paranormal entities? Brooks has the Ghost, Salomon has the Phantasm, and now Topo Athletic has the Specter. I get that maybe the idea is for the shoe to feel like it disappears on your foot, but come on. It’s time to find new inspiration. What’s next, the Puma Poltergeist? Are brands just looking up terms for spirit in the thesaurus?

Anyway, like Meg, I was pretty pumped to try the Specter. I’ve had hit-or-miss experiences with Topo’s offerings in the past, but I figured plenty of foam has to be a good thing, right? The shoe is also far cheaper than most other racers on the market — even if it skips the pop of a plate. Overall, it should have been a good formula, so let’s see what worked and what didn’t MEAGHAN: Even though it’s a brand new shoe, the Specter comes with the classic Topo Athletic design: a low drop and a wide, roomy toe box. The mesh upper is simple and clean, designed with a thin internal liner in both the lateral and medial side of the shoe that adds reinforcement and gives you a good lockdown. I found the fit nearly perfect, and the light heel padding adds just enough comfort. Two lace loops prevent the tongue from moving around mid-run, which is a nice touch. Overall, it’s a pretty great upper.

However, the midsole is the big story in this shoe. It’s a dual-density foam with a Pebax insert wrapped in an EVA frame. The idea of this setup is to mix the fast, bouncy ride of the Pebax with the stable platform of the EVA. I couldn’t feel the Pebax at all, but we’ll talk more about that below. I can’t fault the idea itself, dual-density foam is usually an excellent way to get around a plate. This is the highest stack that Topo Athletic has ever put out (35mm heel/31mm forefoot) and also the lightest. My W7.5 came in at 7.4 oz. That’s a great combo.

RYAN: I’ve given Topo some criticism in the past for shoes that haven’t looked all that exciting. The basic colorways and simple designs didn’t do it for me. On the other hand, the Specter looks pretty darn good. I’m getting serious Hoka Carbon X3 vibes with the big, white midsole and the bright monotone mesh upper. Orange seems to be the color of the year so far, and the overall look makes me feel like I’m running for The U.

I will say that I had quite the experience breaking this shoe in. It came with me on a weeklong vacation, and I set off with it fresh out of the box. The Topo Athletic Specter didn’t feel great out of the box, but I slowly warmed to it as the one-two foam punch softened up and gave me a bit more roll. I think the rockered design is a great touch, it just has a different shape than I’m used to with rockers from other brands like Saucony.

Topo must have taken a page out of the Adidas book of outsoles with its Specter. The coverage is great, and the rubber is kinda like the tire of a Formula 1 car. It’s smooth, but I didn’t have any issues with the grip around corners. Stability, however, is another story. MEAGHAN: On paper, this is the Topo Athletic shoe for me. It’s got a high stack and a wide toe box, but I just couldn’t get on board with the ride. I don’t think I ever felt the Pebax foam at all — it just felt like a big slab of EVA. It didn’t give any bounce or energy return, no matter how many times I laced up. I was even willing to blame my tired legs the first few times, but it didn’t make much difference.

RYAN: If I’m doing any tempo work or racing, there’s no way I’m doing it in a natural toe box. The Topo Athletic Specter simply has too much room for my foot to move around when I’m trying to crush repeats. It’s probably great for Meg’s wider foot, but it wasn’t for me. Topo added a whole heap of lacing holes, which would suggest that you can get a snug fit, but they don’t do a thing for the natural toe box.

Also, I know the EVA frame is supposed to add stability to the overall package, but this isn’t a stable shoe. It’s still tall enough that you can get some noticeable wobble around turns and uneven surfaces. MEAGHAN: The Topo Athletic Specter has all the great qualities of a fast day shoe, but it didn’t come together for me. While I really liked the fit and lightweight upper, everything below the foot was a miss.

RYAN: I think I had the opposite experience as Meg, which is just as much of a red flag. Instead of serious problems with the ride, my biggest problem was the fit. You’ll probably want to look elsewhere if you like a tight shoe for speed work and racing. You may also want to keep in mind that the midsole takes a while to break in. It took beyond our 20-mile minimum for me to find comfort in the stack.

If you want something to go fast without the cost of a super shoe, I’d recommend the Saucony Endorphin Speed or even the ASICS Magic Speed as better options.

You can pick up the Topo Athletic Specter for $150 by using the shop link below.