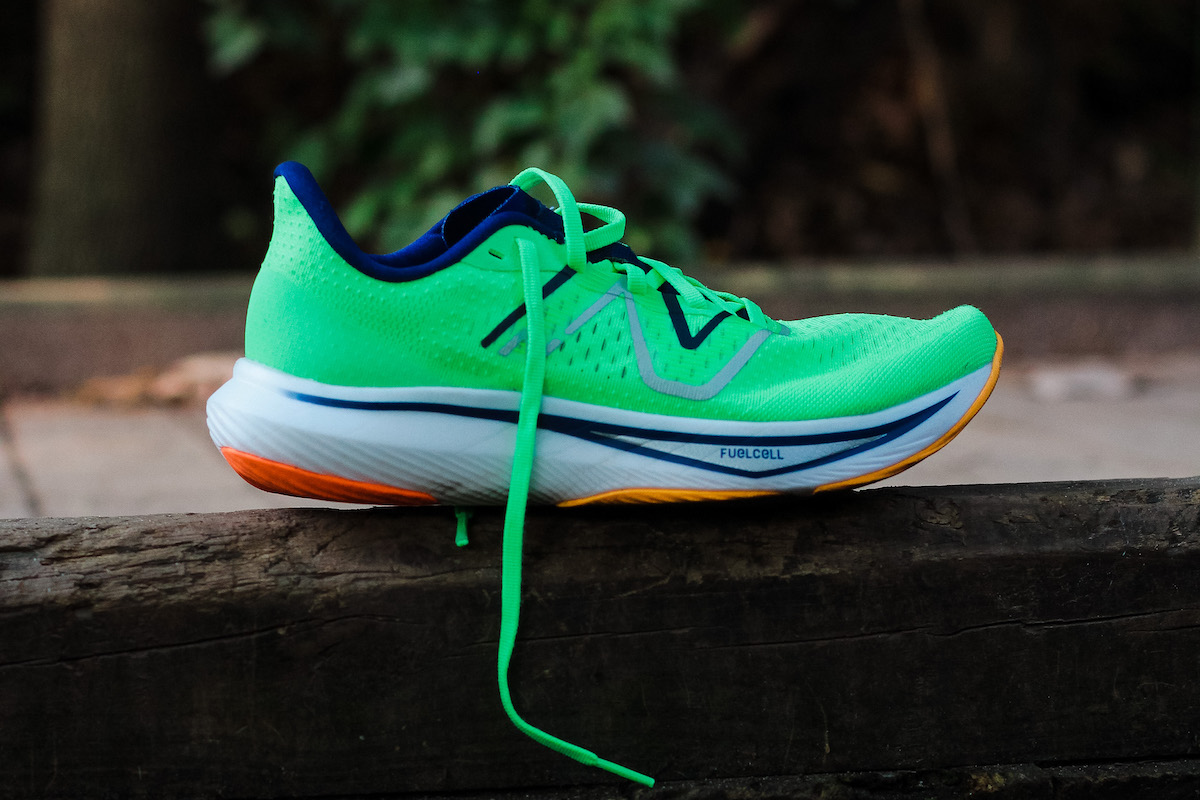 When we give out our B.I.G. (Best In Gear) Awards at the end of each year, we don’t take our decisions lightly. Our word is our bond, we like our martinis like James Bond, and we wish we would’ve put money in bonds instead of crypto.

All that to say, the competition was spicy in the tempo range for 2021, but nothing came close to the heat of the surprising New Balance FuelCell Rebel v2. (Speaking of heat, the mango habanero colorway of the shoe was also one of the best to come out last year.)

To say the Rebel v2 was an improvement over the first version is an understatement– it was a totally different shoe. Its featherweight status, combined with a responsive bed of FuelCell and a breathable upper, made it a smash hit among those looking for a fast day shoe or a lightweight daily trainer. So when we got a first look of the Rebel v3 at The Running Event last December, we wondered– could it get any better? Well, we’ve had it for a month now and gotten plenty of miles in it, so let’s see if it carries on the legacy of the original. While plenty of runners loved the Rebel v2 because of its speed and agility, there was a bit of recklessness that came with it. I mean, the name is Rebel, after all.

It was fast and fun, bouncy yet responsive, but definitely had a strong potential to roll some ankles if you weren’t careful. The upper was pretty unstructured, and depending on your footstrike and lateral movement, had a tendency to blow out the side stitching.

Whether that was a real problem that needed fixing is a debate to be had, but either way, New Balance sought to bring harmony to the masses by widening the mid and forefoot area, while adding some more support to the upper.

Additionally, they increased the stack height of the shoe to offer a more cushioned ride, bumping it up a millimeter and a half to 27.5 in the heel and 21.5 in the forefoot (midsole only).

Notably, the weight is still remarkably light, coming in at 7.4 ounces for a US M9.

The outsole also features NDURANCE rubber in a similar coverage pattern as the last version. Well, we thought this shoe was coming out in a couple weeks so our full reviews haven’t been written yet, but we’ve already put in our full review miles. So while we’ll hash out our thoughts in a more in-depth manner, we’ll give you a quick rundown here.

The elephant in the room is this: does the democratization of the shoe ruin the magic of it? This seems to be a trend these days, after all. Nike did it with the Alphafly (not good), Saucony did it with the Endorphin Speed (good), and now, New Balance does it with the Rebel (let’s see). Shoes that were exciting and somewhat dangerous have now got the kid-helmet treatment.

For certain, the changes to the Rebel v3 will appeal to a greater customer base. It does indeed feel a bit more cushioned and less reckless with a bit more structure. In short, it definitely leans more towards the daily trainer side of things than the tempo side.

The good news here is that it doesn’t lose the magic of v2, and the FuelCell remains bouncy and lively. Combine that with the light weight and you can certainly pick up the pace whenever you want. But… you don’t have to reserve it for tempo days only. This now works better as a daily trainer that you may find yourself reaching for on all your runs.

The upper has more structure to it but still remains breathable. Some runners will like this, some will still want that “not there” feeling of the first one. However, as we mentioned before, there were some issues with the durability in the upper of last year’s model, and it looks like that shouldn’t be an issue here. It also helps to hold the foot a bit better than last year, especially when cornering where you could “go over the edge” in v2.

If we’re being real, we don’t like the styling as much as v2. The big “N” is neither here nor there, and while last year’s version was out-of-the-box exciting, this looks more, like… well, a normal running shoe.

The really good news here is that – unlike every other shoe this year – the price remains the same, coming in at $130.

In a nutshell, the Rebel v3 retains the magic of v2 but spreads the love to those who were hesitant to ride the lightning of last year’s model. It remains a fun and exciting shoe that can pretty much handle daily distances at any pace.

You can pick it up now by using the shop link below.