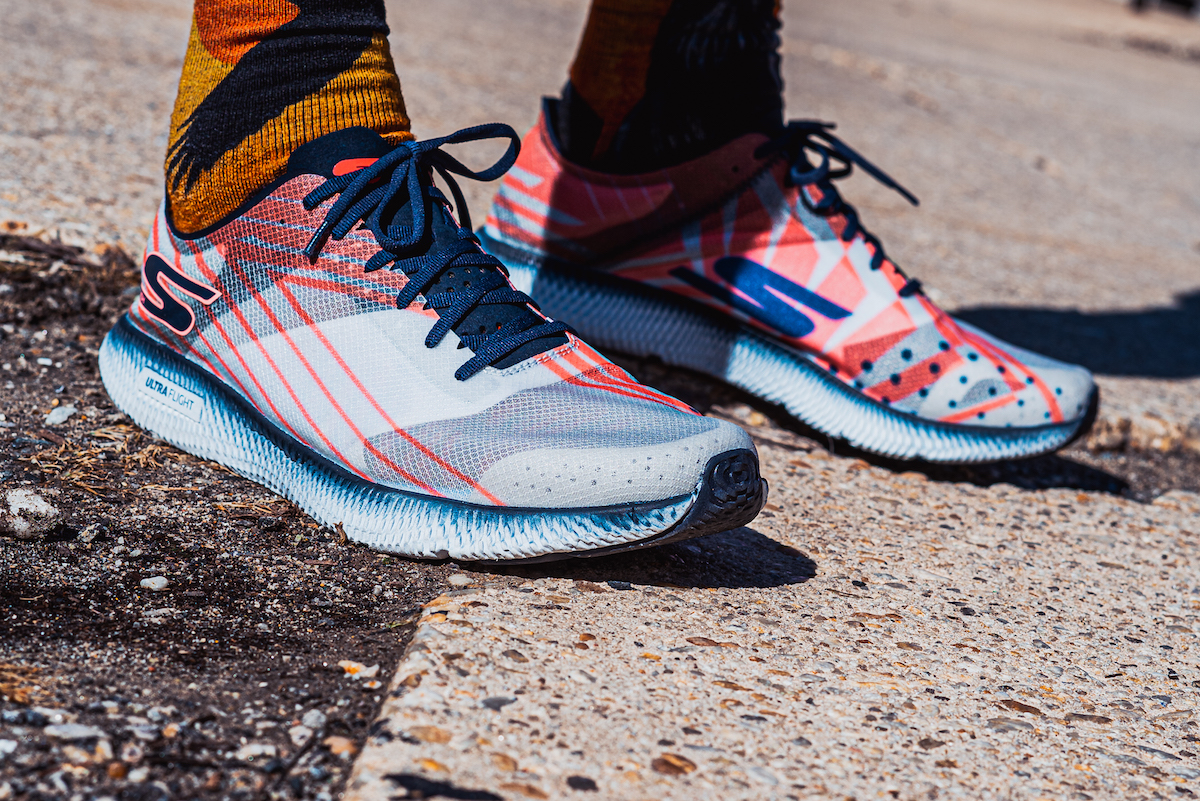 BEN: The original Horizon Vanish was a bit of a surprise entry into the running shoe market last year. It served as a no-nonsense modern take on the “traditional” racing flat. And when I say “traditional” I just mean minimal and lightweight. Everything about the design itself was modern. For 2021, the Horizon Vanish 2 is back with some tweaks.

Let’s start by covering the basics. It (still) uses Skechers’ “Ultra Flight” midsole foam, which doesn’t feel as bouncy or squishy as Hyper Burst, but it’s very light and fits the need of this shoe quite well. The midsole shape incorporates the M-Strike geometry from Skechers (to promote a midfoot strike and quick turnover). The upper is (still) a very minimal and featherweight “Ripstop” nylon mesh (think Vaporweave). The outsole is strategically placed “pods” of Goodyear rubber.

All of this in a package in the mid-5-ounce range (men’s size 9) and for just under $100! This type of price point is becoming a relic in the current running shoe market. The last model had all the right specs for a great, minimal racing flat, but its quirks held it back from being perfect. Does the new version fix them? Read on to find out.

THOMAS: This is no update. To call this a v2 is a sham. You have been hoodwinked. The updates are as follows: the Skechers generic rubber on the outsole has been exchanged for Goodyear® rubber, the lacing has been moved around, and the shoe features a new print design on the upper. That is all. BEN: For the update, the Skechers spec sheet indicates a negligible 0.2oz weight gain, but the midsole is the exact same. Visually the midsole looks much the same, and the shoe is still quite firm.

Probably the biggest issue that I (and most people) had with the first version was the sizing and fit. The Ripstop upper is a very race-ready material. Super light, and no stretch. The downside is that it either fits, or it doesn’t. And if it doesn’t fit, it’s quite troublesome. I found the original to fit extremely small, and even ½ size up felt small. Fortunately, the current version seems to fit true to size! It’s still an overall “snug” fit (as intended), but there is adequate length and width to not cause me issues.

The lacing also changes a bit on this model. The first one had an interesting offset lacing set up with some additional angled cuts in the upper. This one is just the standard, “straight down the foot” setup, and I think it works. Both use extremely thin laces, but these are more stretchy. Thin laces can be a little concerning from a hot spot standpoint, but I didn’t have any issues.

Overall fit, feel, and ride of these is improved from the original. None of these are major changes, but all are slight tweaks in the right direction, and they improve the general usability for me.

THOMAS: It is very light. BEN: Subjectively the first version was a killer aesthetic. It had some serious automotive racing vibes going on, and I was digging it. The looks were very much non-Skechers, and maybe that was the problem. The update goes back to a strong featuring of the Skechers “S”, but otherwise seems to just tone things down. Maybe other colors will pop more, but my test pair looks rather boring compared to the original version.

Other than the subjective looks, the real challenge with these shoes is the limited use case. For me, they’d be for fast reps only. Maybe good for a track workout, but I don’t run on the track. Some people may like them for a tempo shoe or even a road racer in the 5K/10K range, but you really need to be ready for a firm ride. Luckily it does feel responsive, but it will certainly borderline on harsh for some runners.

THOMAS: Once you get past the harsh feel from the ULTRA FLIGHT midsole, you can start worrying about your toes getting smashed. My feet are narrow and my toes felt huddled up in the Horizon Vanish v2. If you want comfort, go to your mom, this shoe won’t be here for it. BEN: The Horizon Vanish V2 makes some worthy updates from the original. The looks were toned down, but the fit and cushion have been improved. The ride still reminds you that it’s a rather minimal ~5oz shoe, but for $100 it’s quite a bargain if that’s what you’re looking for.

THOMAS: At $100 and a weight of sub-6 oz./170g you might be tempted to get this shoe, and I can’t stop you. Some of you super-efficient featherweight runners may actually enjoy the Horizon Vanish v2. That said, the Razor Elite doesn’t weigh that much more and is a far superior choice.

For an even more versatile, but still lightweight Skechers, go with the Razor Excess. Our reviewers across the board loved that shoe. And if you want an even lighter shoe that comes in at 5.08 oz./144g (USA 10.5), actually has decent cushioning and costs even less, wait for the Atreyu Base Model 2. Now for my final act, the Horizon Vanish v2 will disappear from my rotation.