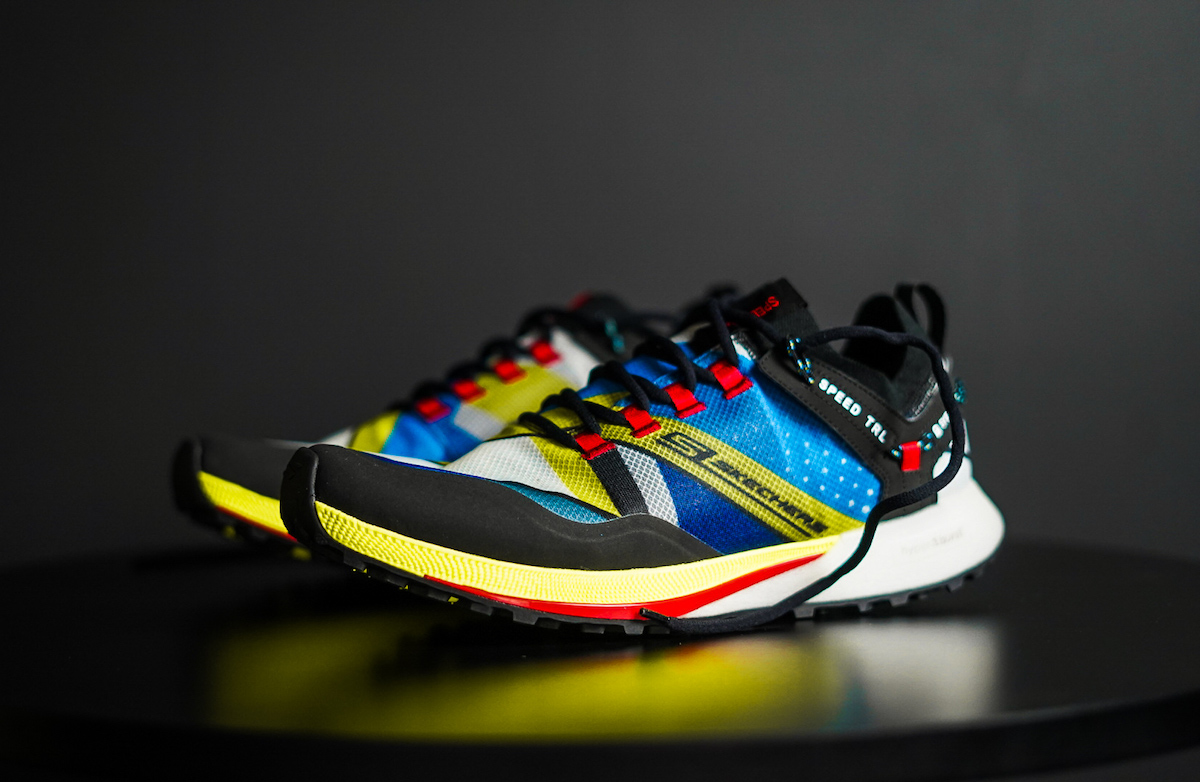 Erin: My last experience with Skechers was the GOrun Max Trail 5 Ultra, a shoe that was my favorite trail shoe for the majority of 2018 (until the Altra Timp 1.5 was released in November).

Needless to say, I was pretty stoked to try the GOrun Speed TRL Hyper. One thing though: Skechers, might you consider limiting your shoe names to something that can fit in one tweet? I see you tried with the ‘TRL’ but it’s a weak effort… TBH.

Taylor: The Skechers GOrun Speed TRL Hyper is the Mazda-that-could in the trail running scene. Zoom zoom! But seriously though, this shoe is all about speed. From its slim and trim (but totally sweet) looks to other performance/comfort-oriented specifics, this shoe is ready to rip. It’s light. It’s fast. It’s surprisingly well-protected and secure. Be ready to bump it up, because they are ready for some fun. Erin: First things first: the styling of this shoe is amazing. It comes dangerously close to being ugly, but has this cool retro IDGAF look. I really dig it. It looks like nothing else on the market, that is for sure. Stripes, lots of colors, and there’s even a friendship-bracelet-looking detail that wraps around the heel and can be tightened with lacing.

This is a fast shoe, no doubt about it. I did two long runs in these, each with a tempo in the middle, and it was really, really hard to turn that tempo off because this shoe just makes you want to fly (when I finished that run, Garmin Connect told me I was “overreaching,” which seems judgy).

After the first run, I thought, ‘maybe I’m just having a really good day.’ But I mean, I have two data points now so I’m 100% certain it’s the shoes. In addition to being racing-flat light, the Hyper Burst midsole is jamming. It’s smooth, it pops, it’s just great.

These bad boys are breathable, and the Goodyear outsole seems to be holding up pretty well, although I haven’t been able to take it through wet conditions. If you have a trail race coming up– one that’s on the shorter side– these are the shoes you’re gonna want to wear. Heck, I’d wear them on the roads. Taylor: Overall, the feel of this shoe is the closest thing you’ll find to a road racing flat, but packaged for trails.

The underfoot package bodes well for speed and even has a decent amount of protection. Though they’re comprised of different materials, the midsole and the forefoot are both protective, light, and zippy. The Hyper Burst midsole is slightly more firm than the forefoot but rolls real nice 👌.

An Injected Nylon forefoot plate adds more protection from the midfoot through the forefoot. The plate seems to really tie the two materials together well and adds a touch more pop to an already responsive setup.

As if this shoe wasn’t exciting enough, Skechers has come through with some groundbreaking (at least to me) technology. The Dynamic Heel-lock System is a small rope that is strategically placed around the heel/collar and contains the shoe’s top lace loops. As you pull the laces to tie them they pull on this lock system to gently cinch the top of the collar, creating a comfortable and secure fit.

The knitted collar also adds a nice booty-like fit to keep debris out. This is one of those, “Why didn’t someone think of that earlier!?” specs. It’s simple but serves up something special.

The Speed TRL Hyper’s mono mesh upper is a crowd-pleaser. It checks the two most important boxes— breathability and durability. The single layer of mesh does enough in both departments to be really satisfactory without having too much, which is a clear goal of Skechers here.

One more really important note is that the forefoot is slightly wider than other shoes in this department (Salomon S/lab Sense SG, Adidas Terrex Speed, Inov-8 Trailtalon 235, etc.). That makes a huge difference in comfort and practicality for the majority of runners. Also, in the aforementioned line-up of light and fast shoes, the Speed TRL Hyper is one of the lightest coming in at 8 oz. flat in a size 9. Erin: As you can tell, I love these shoes, but they aren’t perfect. The tongue is asymmetrical, which I’m not a fan of; it’s kind of difficult to get it situated. If a shoe requires any sort of fussing with to get on, I find that annoying. It isn’t Altra Duo 1.5 bad, but there’s room for improvement.

The forefoot cushioning, composed of Skechers’ ULTRA FLIGHT, is a bit lacking for me. It’s great for shorter runs, but I do feel some fatigue in the forefoot due to the minimal cushioning. Now, I know these are meant for racing and shorter efforts, so that’s partly on me for doing 20+ milers in them. Along the same lines, they don’t offer any protection from rocks, so they’re not ideal for anything really technical.

Taylor: It pains me to bring this up because I have enjoyed this shoe so much— but the outsole does not do the rest of this shoe any justice.

Whether it’s the tread pattern, the softer Goodyear M-Strike rubber, or whatever… the tires need to be changed. Any sort of moisture (especially on pavement or rocky surfaces) felt like a skating rink. On more than one occasion I had to do a lot of extra dancing or tip-toeing that I shouldn’t have to do in a trail shoe. I have never felt so insecure in these conditions.

The outsole is such a huge component to being a good trail shoe, and while it performed fine on dry, mostly smooth to moderate terrain, it’s just not good on anything other than ideal conditions. That is the only negative point I could come up with for this shoe, but it is a strong one. Erin: The Skechers GOrun Speed TRL Hyper is an excellent trail racing shoe, especially on those fabled “buffed-out trails” I keep hearing about on the West Coast. If you’re looking for something you can fly in, and that also looks fly, try it out!

Taylor: I am personally really impressed by the GOrun Speed TRL Hyper. It boasts a lot for such a light package. It’s not going to be an ultra shoe, but anything 5k to 50k with mostly smooth moderately terrain would be fair game.

It also seems surreal to be sporting a high-performance version of a shoe that looks like something I would have taken someone’s lunch money to buy in elementary school. It has been really fun to take the Skechers GOrun Speed TRL Hyper out and I look forward to many more workouts and perhaps some shorter races in them… as long as it’s dry.

You can purchase the Skechers GOrun Speed TRL Hyper for $119.95 using the shop link below.