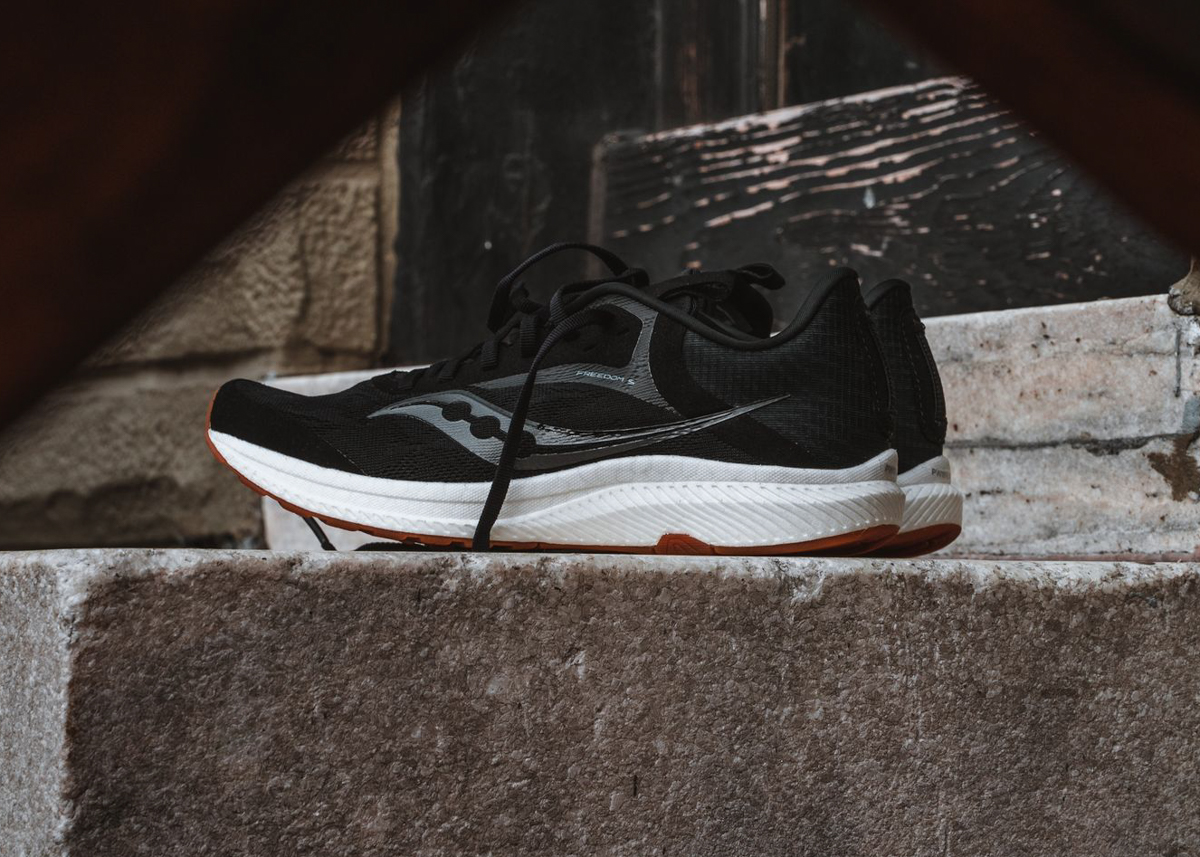 RYAN: Don’t look now, but Saucony is having itself a nice little spring season. I got to put miles on the Axon 2 already, which far exceeded my expectations. Now, it’s time to dip back into the well and enjoy some freedom — some Freedom 5, that is. I wasn’t expecting to run in the Saucony Freedom 5 this year, but I’m glad I got the chance to.

Like Robbe, I enjoyed my time in the shoe but found myself pretty confused about where it fits. It’s like an Endorphin and Kinvara love-child, with some of the benefits of both, yet it doesn’t top either one outright. You’ll see what we mean.

RENALDO: I’m a pretty big Saucony fan if you didn’t know. Having run my first marathon in the Guide 13, getting to review the Saucony Freedom 5 was almost like a little reunion. The shoe is a neutral all-rounder that you can wear on the road, gym, or even pilates. With a PWRRUN PB midsole — the same foam you’ll find on the Endorphin series — the Freedom 5 promises solid energy return and bounce that you know from some of Saucony’s biggest hits.

It’s been a hot minute from my first marathon to now, and I’ve learned a lot about my running and the shoes that allow me to perform at my best. Now it’s time to apply that knowledge to the Saucony Freedom 5 and see if the reunion is all it was cracked up to be.

ROBBE: I’ll start by saying I’ve never run in the Freedom, nor have I particularly cared to do so. I’ve referred to last year’s and this year’s model as the poor man’s Endorphin Speed, but it’s more like the upper-middle-class man’s Endorphin Speed because it’s only $10 less but features the same midsole materials minus the nylon plate. That said, the performance isn’t anything close to the Speed, but we’ll get into that later. RYAN: Robbe and Renaldo are about to hit the style segment pretty heavy, so I’m just gonna stick to my experience with the shoe. I didn’t like my first run in the Saucony Freedom 5 whatsoever. Maybe it was the wind or the adjustment to a 4mm drop shoe, but it just wasn’t working.

Then, I laced it back up for a few more runs, determined to give it a chance in nicer weather. Boy, I’m glad I did. Honestly, I think the low-stack slab of PWRRUN PB is just what the doctor ordered. It feels like a nice change from some of the high-stack monsters we’re used to. The shoe feels like what the Kinvara could have been — they follow a similar formula, but the Freedom 5 offers a much better midsole.

I even took the Saucony Freedom 5 for my first Saturday Classic with the Faster Bastards and had no problems pounding around Baltimore. The black colorway matched the overall vibe, too. Sure, Thomas described the shoe as a “slappy brick,” but I’m not gonna let that get in my way. I could see someone calling the shoe the Endorphin Speed’s redheaded stepchild, but this kid still deserves plenty of love.

RENALDO: Let’s start with what everyone is bound to notice first — the shoe is a looker. The blacked-out upper and simple touches of suede pop nicely on the gum sole base. It’s damn good-looking without screaming that it’s a running shoe. The Saucony Freedom 5 is surprisingly light, too. At just 8.4 oz. for a US M9, you won’t have any problems putting miles in without noticing the shoe.

Hey, the shoe is vegan, too. It’s mostly made up of its own salad bar of recycled materials. ROBBE: As a mid-90s skate kid, I love a good gum sole. The posers over at Reebok recently tried to do an imitation gum sole on the Floatride Energy 4, which is just a tan outsole. Murdering an otherwise great-looking shoe with a faux gum sole deserves a straight ass-kicking. However, Saucony knows how to keep it real— the Freedom 5 features a legit gum sole, elevating this review to an automatic 9/10 already.

Moving onto things that actually matter— the upper of this shoe is an engineered mesh with a neoprene-style tongue. It runs pretty narrow, so that could be an issue for some, but I have a narrow foot, so I enjoyed the shoe’s lockdown. It’s pretty straightforward, not a ton of cushion, but overall I found it to be satisfactory.

The midsole, as I’ve stated, is made from PWRRUN PB, that Pebax-based, Boost-looking material found in the Endorphin Pro and Endorphin Speed. Admittedly, I wasn’t impressed with this shoe at first, but after a couple more runs, I actually really enjoyed it. It’s like what the Kinvara should be (albeit a touch heavier and more built-up), a lightweight daily trainer/tempo shoe that can pick it up when necessary but offers a somewhat firm and responsive ride. I will say, if both the Kinvara and the Freedom exist in that space, the Kinvara would lean towards the tempo side (a bit lighter and much firmer) while the Freedom would lean towards the daily trainer side. All that to say, if you found the Kinvara to be too harsh, you may want to take a look at the Freedom.

It doesn’t have the same bounce/propulsion as its PWRRUN pals in the Speed and Pro, so remove all expectations in that regard. With a medium height stack and low drop (27mm in heel, 23mm in toe, 4mm drop), it feels pretty straightforward in its performance, maybe even boring — but in a good way.

I should note that’s it’s also very flexible, which is a lot different than its plated brethren. RYAN: The Saucony Freedom 5 lives in a confusing place, kinda like a cupboard under the stairs. It’s just $10 cheaper than the Endorphin Speed 2, yet it lacks the plate and SpeedRoll technology. It’s also $30 more expensive than the Kinvara 13, but the most significant difference is PWRRUN PB vs plain old PWRRUN. If you switched the price points ($10 more than the Kinvara, $30 less than the Speed), Saucony would have a winner here, but the money doesn’t make sense right now.

RENALDO: Now, the Saucony Freedom 5 is very low to the ground. A 4mm drop with a pretty secure fit can make hitting the pavement feel a little harsh, especially on hills. The PWRRUN PB midsole alleviates that problem on flatter surfaces, but I won’t be taking this one on any long runs in Baltimore anytime soon.

That secure fit I was talking about? It can be a little too secure, almost restrictive. I’ve got the US M11.5 and wish I could wiggle my toes just a bit more. At $150, I shouldn’t be paying for any sort of discomfort.

ROBBE: I definitely think the price point on this shoe is too high. You can get roughly the same/much better performance from shoes across the Freedom’s use range. Shoes like the New Balance Rebel v2, Puma Velocity Nitro 2, or even the Nike Pegasus 38 are much cheaper and offer the same feel. Not sure if they’re trying to justify it with the PWRRUN PB midsole, but you’re not getting the same pop and roll that makes the Endorphin Speed one of the best shoes of the last several years. RYAN: Just like with the Axon 2, Saucony surprised me. I wasn’t expecting much for the Freedom 5, and I hadn’t run in any other Freedom models. However, there’s just something about the PWRRUN PB that works for me. I can appreciate that the shoe is sleek enough to wear casually. It’s not going to compete against the max-stack monsters, but it doesn’t need to. The Freedom 5 is for a responsive experience and works pretty well when you pick up the pace.

Whatever Saucony has to do to fix the pricing, it should do. A lower price would send the Freedom 5 to a new level.

RENALDO: After a few runs in the Saucony Freedom 5, I really wanted to like it, but I just couldn’t vibe with the ride or fit. There’s not enough support for my long runs, and the bounce is rather unremarkable for my weekly 5k. I’d recommend these shoes to the run commuter. It’s for someone living in the city and looking for a trainer that’ll get them to the gym, the grocery store, or grabbing some fruit smoothies after a HIIT class that still looks fashionable. At $150, though, it’ll be tough to convince your average scrappy city runner.

ROBBE: I will say that overall, this shoe surprised me. I liked it a lot for daily runs where you wanted to feel a little bitter faster without sacrificing comfort, especially if you wanted to pick up the pace. If this came in at a bit lower price point, I would probably be raving about it even more, especially with that gum sole (though I’m not a huge fan of the all-black colorway).

Certainly not a bad shoe, and if you’re looking for the Kinvara with a bit more cushion, this could serve you well.

You can pick up the Saucony Freedom 5 for $150 at Running Warehouse (featuring free 2-day shipping and 90-day returns) by using the shop link below.