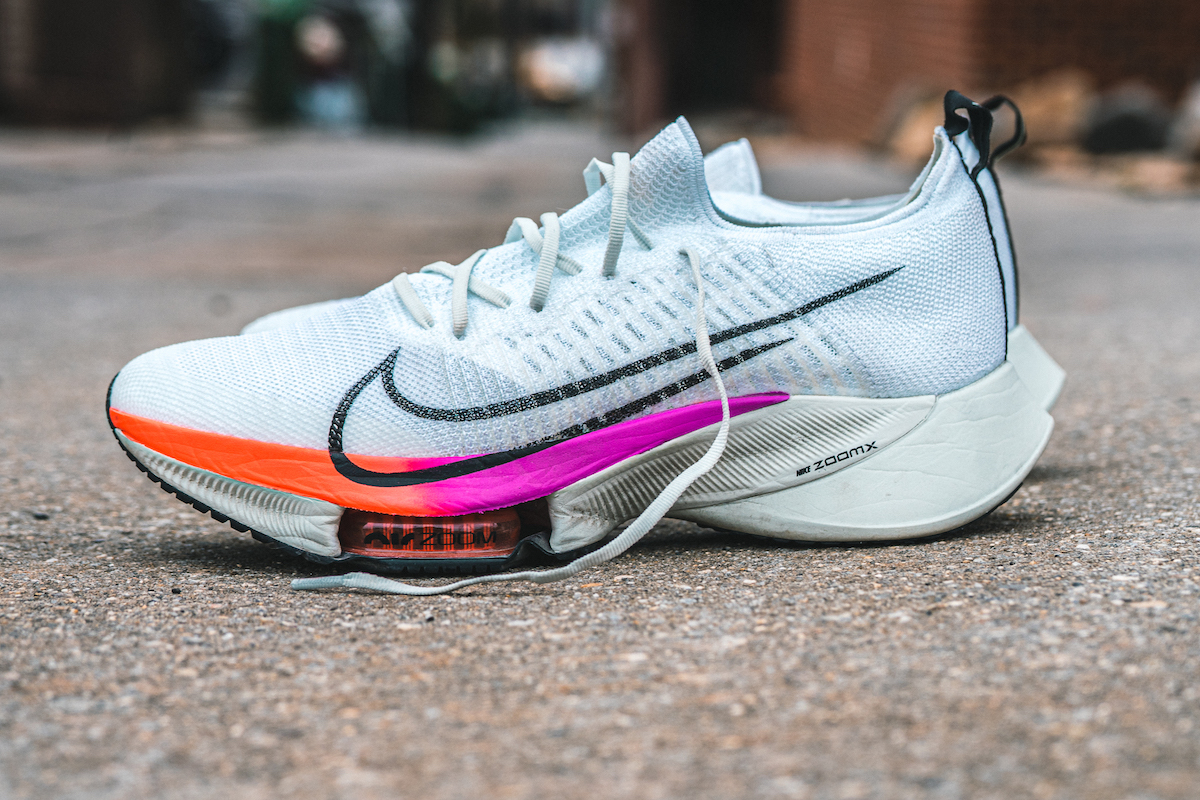 THOMAS: The first time I saw a duck-billed platypus, I was confused. Is this animal– the keytar of the animal kingdom– a practical joke taken too far, or the most excellent byproduct of evolution gone off the rails? I still have no answer.

All that to say, the Nike Air Zoom Tempo Next% is a beaver with a bill. Or a furry duck. Or maybe it’s a daily trainer, a race day shoe, or something new entirely. In a quest to find out if it’s any of these things, I set aside an entire week of running just for this shoe. Long story short, I’m still a little stumped.

Here’s what the Tempo Next% is on paper– a midweight tempo shoe in the style of the Nike Alphafly NEXT%, featuring a ZoomX midsole from mid- to forefoot and a React heel segment. A composite plate and Zoom Air pods in the forefoot also aids in a more propulsive toe-off.

Its components come together to create a unique experience, but they never fully vanish into a whole. Let’s go swimming with the Platypus Next%. THOMAS: I like some bounce in my stride. The Tempo Next% delivers bounce similar to the Alphafly Next% but isn’t quite as soft and light as the Alphafly. As mentioned in the intro, the major difference is the addition of React foam in the midfoot-to-heel segment, a little more rubber in the heel, and, instead of a carbon plate like the Alphafly, the Tempo has a composite plate. The mix of the ZoomX foam, React foam, a plate, Zoom Air pillows makes for a unique running sensation. The combo feels unstable at moderate speeds but comes together as you pick up the pace. When running faster the shoe rewards you by leaning you forward and bouncing you into the next revolution. It is a bounce and flick sensation. Land, bounce, flick forward, repeat.

The ride is unique and at faster paces the shoe can be a lot of fun. I did two 10+ mile runs that gave me confidence that the shoe could be useful at any distance. Post-run, my legs felt fresh and my paces were on the faster side. During an actual Tempo run I hit my goal paces and really enjoyed the shoe.

The toe of the outsole is covered in grippy rubber and the heel has similar rubber coverage to the Aplphafly, but thicker and more durable.

The knit upper fits my narrow foot, and the stretchy tongue area wraps my foot snugly with a reinforced saddle of felt lattice on both the medial and lateral sides. With the elastic mesh over the arch of the foot, I didn’t need to be aggressive with off-centered lacing. The heel counter is rigid and has some moderate padding to keep your heel locked down. I like the fit of the very breathable upper. The Tempo Next% in a size 10.5 weighs in at 9.5 oz/270 grams.

MEAGHAN: First of all, the white on white colorway is straight beautiful. I think Nike should make all of their shoes in this style. The Tempo NEXT% is touted as a racer made for everyday training. It’s supposed to bridge the gap between racing and training, so you can train fast to race even faster.

The upper looks simple, but it works. The Flyknit and synthetic materials breath well and provide plenty of structure. There’s a midfoot cage that hugs the foot and the asymmetrical lacing gives the shoe a nice dialed-in fit.

While not as light as the Alphafly, the Tempo NEXT% is still a very light shoe, especially if we’re calling it a daily trainer. The shoe is called the “Tempo” Next% so I shouldn’t be surprised that it doesn’t work great for easy runs. At a slower pace, the shoe feels disjointed and unstable.

My biggest problem is that I just don’t know where it fits in. If it is indeed a tempo-only shoe (which I feel that it is), then it’s certainly a pretty penny to pay for a very specific shoe. But Nike is marketing the Tempo Next% as a do-anything shoe to accompany the Alphafly. I don’t think it can do everything, at least not well.

It’s too unstable for daily miles and it’s too heavy/bulky for racing.

MEAGHAN: Don’t try sneaking out of the house in this shoe. Talk about loud. On several occasions as I was jogging along the promenade, people nearly 100 yards in front of me cleared the way (ok, honestly that is a perk), as I imagine they thought a Clydesdale was approaching.

I also found this shoe felt clunky at slower paces. At faster paces, it was easy to get into a rhythm, but when I slowed down, the shoes felt disjointed. THOMAS: After a week of running in the Tempo, I was still confused by this shoe. At $200 there are better race day shoes and less expensive daily trainers. If you’re super intent on buying it, then I could see it in an Alphafly/Tempo/Pegasus rotation. That’s a $600 paycheck (i.e. a week and a half of flipping burgers at McDonald’s).

Is it a duck, is it a beaver? You’ll have to try the Tempo and decide for yourself. Or look to something more evolved.

MEAGHAN: The Tempo NEXT% is great for speed days, but I can’t put this into my daily rotation. It just doesn’t work for easy days. Unless you have an extra $200 laying around, I would skip this shoe entirely and stick with a daily trainer, like the Nike Pegasus 37 or New Balance Beacon 3 and spend the extra dough on a Vaporfly Next% or Alphafly Next%.

You can pick up the Nike Air Zoom Tempo NEXT% for $200 at Running Warehouse (featuring free 2-day shipping and 90-day returns) by using the shop link below.