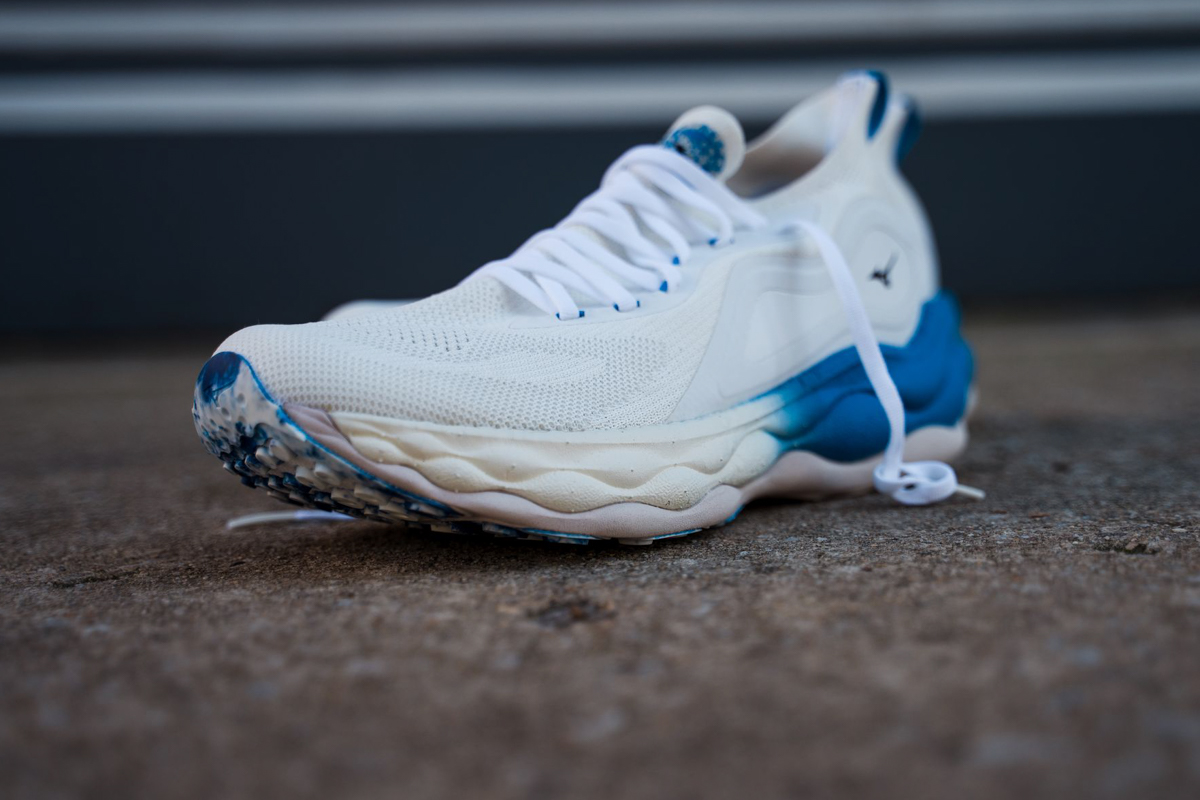 ADRIENNE: The high-performance shoe market is evolving. What started as a race to create the fastest shoe has now adopted a secondary goal of which shoe can be the most sustainable. Well, maybe that’s just in my head, and this is only an example of Mizuno trying to change our perception. Our last few reviews have been, let’s say, uninspired. That was then, this is now — the Mizuno Wave Neo Ultra.

Mizuno’s latest easy day cruiser arrived at my door, and immediately it felt like something new. Like its lower-slung sibling, the Wave Neo Wind, the Wave Neo Ultra features a striking white knit upper and a blue-dyed midsole and outsole. Also, like its sister shoe, the Wave Neo Ultra is big into recycled goods. It’s done up with 70% recycled or sustainably sourced materials and a 100% reduction in the use of dye water.

The Wave Neo Ultra sits on a dual-layer midsole, with bio/castor-based Enerzy Lite slapped on top of algae-based Enerzy Bloom. I won’t lie, the thought of algae in my shoes makes me think of river days and slippery rocks, but fortunately, there’s nothing slimy or gross about Mizuno’s new formula. If you hadn’t told me, I’d have thought it was just another EVA/TPU/nitrogen-based foam. Add some Enerzy Core inside the double-stack midsole, and you get a surprisingly lively ride.

LINDSAY: Ding ding, time for my second round in a Mizuno shoe. This time, my opponent is the Wave Neo Ultra. It’s another “wave” from the future that sports an eco-friendly design and production, just like the Wave Neo Wind.

Given the disappointment that was the Wave Neo Wind, I came into this one with some low expectations. However, I gotta say that I was pleasantly surprised. My main hope was for a more comfortable upper, and I guess it delivered. Overall, there are some important changes that separate the Ultra from the Wind, offering improvements that make my heels smile.

We covered a lot of the specs in the Wave Neo Wind review, so let’s get right on to the good stuff. ADRIENNE: I had reservations about the sleek but kind of nightmarish upper from last time (something Lindsay can attest to). However, Mizuno seems to have done a much better job of dialing in the fit. I found this one of the better knit uppers I’ve slid my janky, calloused feet into. Seriously, I didn’t run into any hotspots and had no problems with breathability. After some serious debate about wearing the Wave Neo Ultra out into 80-degree weather, I was pleasantly surprised.

The lacing system is also dialed in and does a fair job of distributing pressure across the foot. Even the pull tabs are kind of good, which is more than I usually give them credit for.

For those unfamiliar with Mizuno or just bored to death by previous offerings, don’t give up yet. This feels nothing like a Mizuno shoe, and that’s a great thing. My first run felt reminiscent of my first taste of the New Balance Fresh Foam 1080v10, a shoe I loved. I expected a clunky, squishy slog but got a bouncy, smooth joyride. Unlike the absurd 12mm drop Mizuno designers love, the Wave Neo Ultra trims to a comfortable 8mm (39mm heel/31mm toe). It’s no doubt a luxury SUV — large and in charge, but smooth.

The overall ride reflects that SUV mentality. It’s bouncy but controlled and somehow stable. It runs lighter than its advertised weight, and the platform can accommodate various foot types and strike patterns. I won’t lie, it’s best suited for easy days and recovery paces, but it could work for a long run if you wanted extra protection. It’s served me well for runs from 3 to 10 miles and hasn’t struggled at all.

Mizuno doesn’t intend its Wave Neo Ultra as a slow shoe, and for the money, it shouldn’t be, but there are better shoes to pick up the pace in. The cushion sits between soft and firm, and I feel protected no matter where I land. I still can’t believe it’s made from beans and algae. The recycled rubber and polymer-stiffened mesh outsole offers excellent coverage and grips the pavement well. Even the marbled pattern helps to spice things up a bit.

After a bit of a miss with the Neo Wind, this shoe was a pleasant surprise. It fits true to size and didn’t try to murder my ankles. There’s just one thing that gives me pause…

LINDSAY: We can’t bypass the good stuff without mentioning the 13% reduction in CO2 emission during production. Mizuno also doesn’t use any dying water in the process. Hello, conservation. Like I said earlier, the upper on the Wave Neo Ultra is more comfortable and breathable than its counterpart. Also, compared to the Wave Neo Wind, the forefoot is wider with a softer and more flexible knit, making this the better option for those with wider feet or bunions.

If you read my review of the Wave Neo Wind, you know my heels lost that battle. Fortunately, the heel on the Wave Neo Ultra is much softer with the sock liner wrapping all the way around. It does feel like you have a sock pulled up to your ankle. The midsole still has the bouncy, energetic trio of Mizuno Enerzy foam, and with a higher stack height, the balls of my toes were enjoying a plush landing with every step. The outsole is still the same, durable G3 sole with great traction. Two thumbs up. ADRIENNE: I don’t think I’m alone when I say daily trainers shouldn’t cost the same as super shoes. Like, seriously, Mizuno. Asking $250 is a tough sell for most runners, and it rules out a lot of triathletes, too.

LINDSAY: Although it’s better, I’m still not a fan of the one-piece upper. It seems like it should be easier to slip on, but the plastic paneling around the laces limits the overall stretch, no matter how loose the laces are. There’s also some extra white paneling around the sides of the upper that offsets the knit, taking away from the clean effect.

Every time I saw this shoe reflected in a window or a mirror, it reminded me of a low-top basketball shoe. I guess I’m trying to say that I don’t love the style. I would also love to see more than one colorway, as white and blue are just begging to get dirty. I’m sure as Mizuno expands its collection, there will be more naturally sourced colorways available.

And finally, Adrienne is right. This price point is ridiculous for anything without a carbon plate and some unbelievable foam. Two and a half Benjamins for a pair of shoes has to be enough for even Elon Musk to question the merits of a futuristic daily trainer. ADRIENNE: At the moment, sustainably built shoes are not an inexpensive operation. Hopefully that’ll change because Mizuno seems to be onto something. Overall, I’m here for the deviation from the plastic-plated norm. If you can splash the $250, first of all, call me and give me your secret. Second, you’re in for one of the more comfortable daily trainers on the market. Long story short, the Mizuno Wave Neo Ultra lives up to its Ultra name and left me pleasantly surprised.

LINDSAY: Out of the Mizuno Neo collection, the Wave Neo Ultra is my instant pick. Sure, it’s a pick out of two shoes, but shut up. It’s a great option as an eco-friendly, comfortable daily trainer. Thanks to Mizuno’s partnership with the National Forest Foundation, you’re practically contributing to reforestation when you buy a pair.

However, the style ain’t for me. I hope that as Mizuno’s Crew21 Project evolves, so will the design of its sustainable shoes. I’m rooting for you, Mizuno. Here’s to carbon neutrality by 2050.

You can pick up the Mizuno Wave Neo Ultra for $250 at Fleet Feet by using the shop link below.