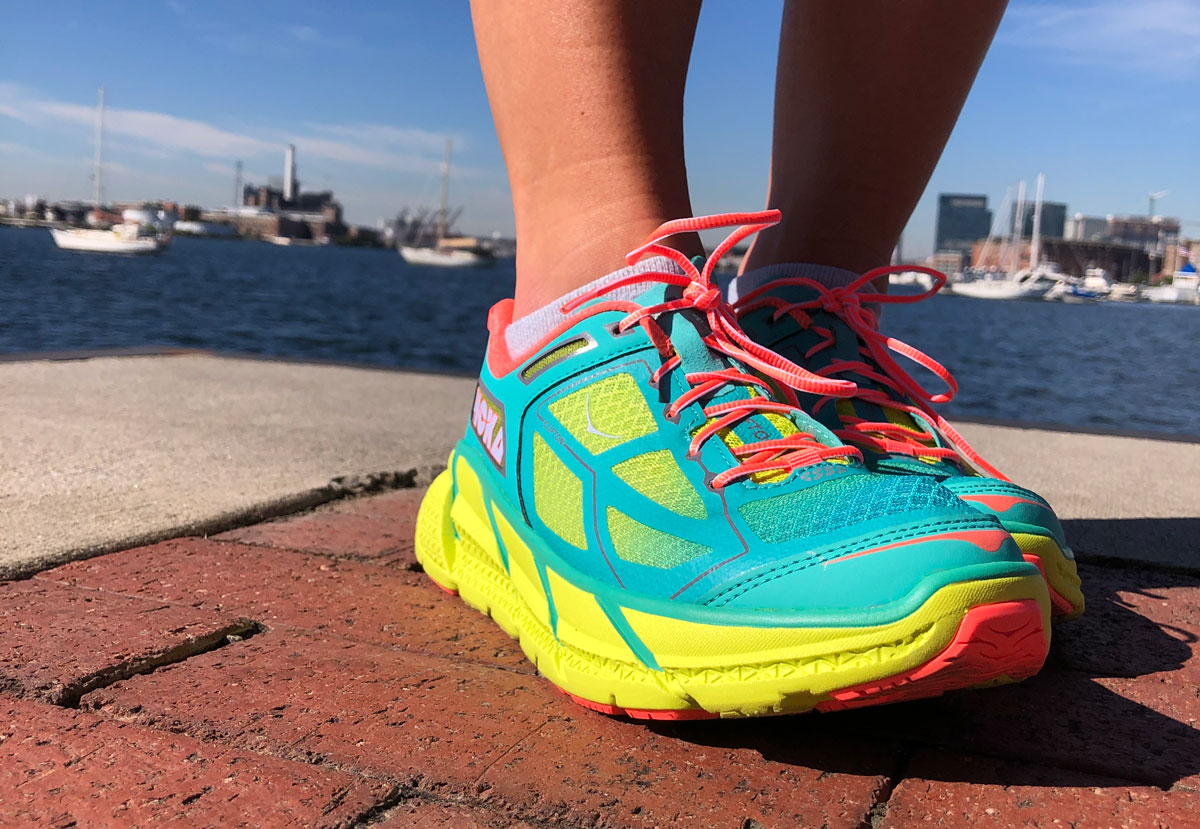 Thomas: The Clifton is back!!!! To avoid confusion we will call it the Clifton 1. I have to hand it to Hoka, this isn’t the Clifton 1 with some small tweaks, this is the MOTHER F@K’N REAL DEAL. The OG. The Clifton 1 is like going down memory lane, reuniting with an old friend and picking up exactly where you left off; Or wait, it’s like an old lover that you started picking apart, looking at their small flaws and not realizing they were actually the best you ever had, and it might be the best you will ever have. You may even spend the rest of your life trying to find another just like them. Don’t get me wrong, others have come close, but this is the one, the Clifton 1. Thank you Hoka One One, this shoe is definitely in my hall of fame, or shoe rack of fame.

Now settle in and read the original reviews of the Clifton 1 from back in 2014 cause it is the.same.shoe.

Meaghan: Now that I’m on my second pair of HOKA One One Clifton (both of which I purchased) and have run two marathons in them, I figured it was time to write a review. Here it is.

Peter: Jack of all trades, Master of… The Clifton is, as advertised, light and seemingly impossibly cushioned. I’m still trying to get my head around this shoe. On paper, it’s exactly what I’ve been asking for—a super-cushioned shoe for long runs or recovery days that doesn’t feel like a lead weight. As I get a bit older (40’s) and as I run more miles (40-50 per week) I’ve found that I’m feeling pretty beaten up, so I’ve been looking for some cushier miles. I tried the Hoka One One Bondi and, while I liked the ride, I felt like I was weightlifting by the end of a run. So, I was very excited to get into the Clifton… Meaghan: Based on that brief introduction, you can probably tell I’m a huge fan of this shoe. Despite their gargantuan looks, they’re super light; the cushion-to-weight ratio is insane. My W7.5 weighed in at 6.55 oz. The upper is constructed with minimal material and it’s extremely breathable. From the top of the arch to the toe, the mesh is basically see-through. Through the heel and collar is where HOKA added some padding for comfort and structure. The tongue is paper thin and the lacing allows you to tighten up the fit if needed. The shoes are pretty wide throughout, especially through the toebox. I personally love the fit. They’re comfortable for my wide feet and allow my toes to spread freely. Hopefully, you don’t need them, but ANY insole will fit in these shoes. The ride of this shoe is what I really fell in love with. So much soft, bouncy cushioning underfoot… from landing to toe-off. And on top of it all? They’re fast.

Peter:  Super light: Hoka Lists the men’s 9 at 7.7 oz. I wear an 11 and it’s still a very light shoe—noticeably lighter than the New Balance 890 that I’ve been logging a lot of miles on.

Fast: This shoe moves. My second run in these had a bunch of striders and picking up the speed on these is easy. They move really well when you lean into them. The speed is a bit of a mixed blessing as I’ve tended to go way faster on my “easy” runs when wearing these. They’re easy to get moving in and fun too.

Ride: Definitely VERY cushioned—but not mushy. Not the most ‘efficient’ shoe I have, but pretty good. The sole is showing relatively little wear for the 60 miles or so I’ve put on them so far.

Upper: The upper is nice and light, though I’ll address some fit issues in the “bad” section.

Meaghan: I wouldn’t change a thing about this shoe with the exception of the tongue. It’s too flimsy for me. I wish HOKA continued the padding they structured through the heel and collar, in the tongue. Rumor has it this happened in V2.

Peter:  Fit: The shoe is a LITTLE bit too roomy for my low(ish) volume foot. I have to cinch down the laces pretty tight to keep from moving around. The insole provided is as minimal as they come, so I’ve been playing around with different insoles to see if it helps me fill out the shoe a bit.

I’ve had a couple of blisters that I’ve not gotten before. One just behind the ball of one of my feet on the inside (front of the arch). Can’t really figure out what’s aggravating it.

Fatigue: I’m wondering if there’s a little bit of leg and foot fatigue due to the amount of cushioning. It’s really hard to say. Legs may be fatigued from mileage and my easy workouts being too fast. There’s a little bit of fatigue on the balls of my feet up above 15 miles. Certainly less than in my Newtons, but it’s there. In the least scientific way possible, I’ll just say that it seems that to get this much cushion, one gives up just a bit of efficiency—just a bit. Meaghan: I remember the first time I saw a pair of HOKAS… I thought they looked ridiculous. Not much has changed there, other than my love for them. I know a lot of people hate on HOKAS and the max shoe movement in general. I get it. I was raving about minimal shoes not too long ago. I’ve run a marathon in a pair of race flats (New Balance 1400) and I’ve run a marathon in max-cushioned shoes (Hoka Clifton x2). My main concern with running shoes and long distances is weight. If you can slap an inch of cushioning on a shoe and still keep it under 7 oz, I am going to wear it. If you haven’t tried the HOKA Clifton, I suggest you give it a try. The Clifton 2’s will be available later this month.

Peter: Okay, let’s start with this: I love the Clifton and think it’s a great shoe for anyone to have in their rotation. That said, I’m still figuring out exactly what to do with it. I’ve done several “easy” days, a couple of fartlek runs, some striders and a couple of long days (one of them a bunch of 1/2 mile MP intervals). As I mentioned in the review, I’m tending to go WAY faster on my easy workouts than I intend to (partly because the Clifton is just so fun to get moving in). I think I can reign that in, and on today’s 17-miler I managed to keep it contained. In a way, the Clifton is a great jack of all trades: It’s light, it’s fast, it’s nice and cushy to recover in and it’s got a pretty good ‘barely there’ fit. Is it a good shoe for tempo workouts? Yes, it’s felt great at speed. Is it a good shoe for long, slow distance? Yes. That said, I don’t think I’d race a marathon in it, because I feel a little bit of efficiency is lost. I’m hearing that the Huaka, though slightly heavier, may be a slightly more efficient ride. I’ll probably give that a go next. If I had to pick just one shoe to use for all of my training, it would be the Clifton (providing that I can dial the fit in perfectly)—luckily I don’ t have to choose!

“Quite possibly the smoothest-riding shoe on the market, the CLIFTON offers incredible cushioning at an almost impossibly lightweight. Early stage Meta-Rocker sculpting geometry provides a fluid, efficient ride and the stripped down SpeedFrame upper leaves no extra weight for you to lug around. If you want to take the feeling of running on grass with you to the concrete jungle, look no further than the Clifton.”

HOKA ONE ONE
show 4 comments