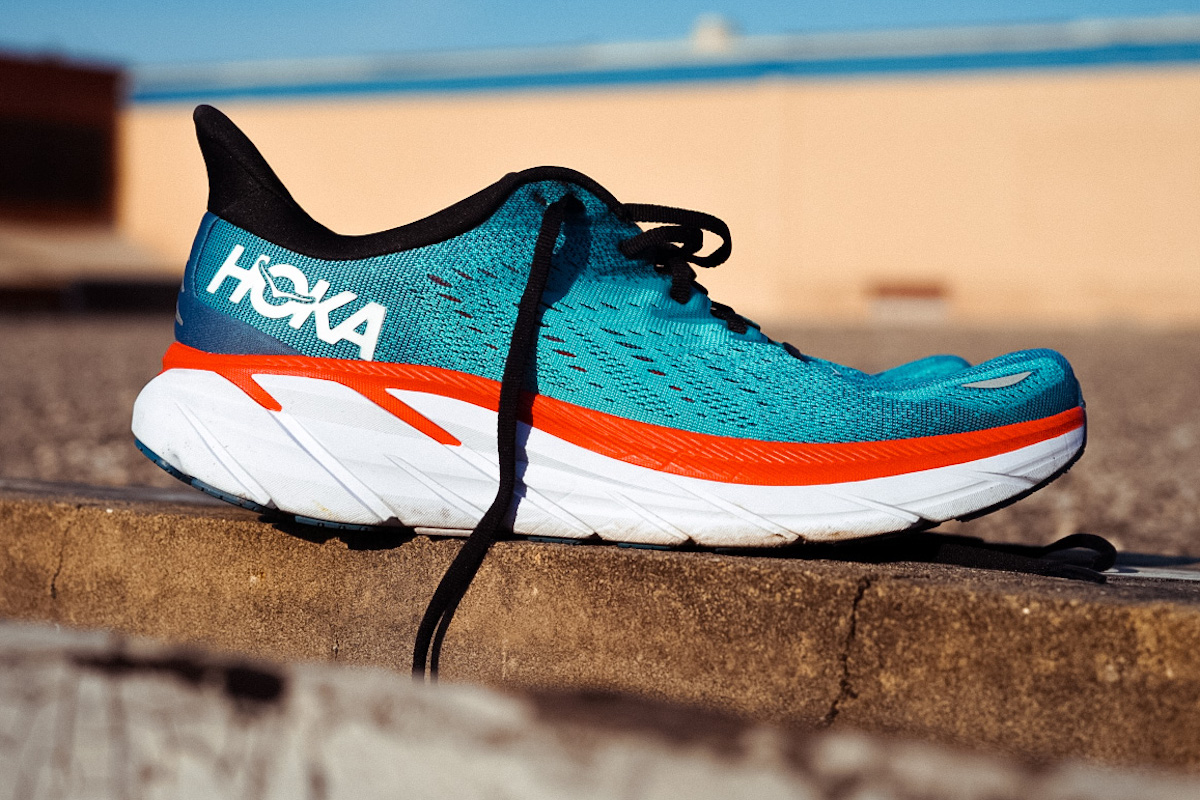 MEAGHAN: Here we are, 8 years of the HOKA Clifton and it’s still one of my all-time favorite daily trainers. I’m always half excited, half nervous about what the next iteration will bring. I mean, at one point (in 2018) they brought back the Clifton 1, the OG, because they made one too many changes in the wrong direction and Clifton fans got all Hulk-raged (as much as someone who runs in a block of foam can get). But they got back on track over the last couple years, and the Clifton 8 extends the Clifton legend as a pillowy, cushy, delightful trainer.

JEREMY: Has it really been one year since our review of the Clifton 7? To say I enjoyed the previous iteration of this shoe would be an understatement, I got a lot of use out of the Clifton 7, logging over 1000 miles total on two pairs since April 2020. After a bit of a detour for the Clifton 4 and 5, this shoe has been trending in the right direction ever since. The Clifton 8 is no exception to this trend, I would say this represents a big leap forward for the shoe, offering an update that stays true to its heritage as a plush and cushioned shoe, but coming in with a lighter midsole (same weight).

ROBBE: Well, we have one person who has worn every version of this shoe (Meaghan), one person who has run thousands of miles in the last couple versions of the shoe, and myself, who has never run in a Clifton until a couple weeks ago. Honestly, the only reason I asked for it is because it’s so legendary. After all, it’s the only shoe aside from the Alphafly that Meg has bought after destroying her review sample. So is the hype real? Let’s find out. MEAGHAN: Ok, I have to start with the colorway because the Eggshell blue has got to be one of my favorites so far. The upper itself hasn’t changed too much, though HOKA did note that the materials are 100% vegan. Not sure if they’ve always been that way, but good news if you’re a PETA-loving shoe nerd. Anyway, they’ve kept the flared heel collar, padded and gusseted tongue and pretty much everything else about the upper. Essentially it’s a soft, stretchy mesh that’s light and breathable. It works.

Where things got an update is underneath the foot, with HOKA’s new midsole foam. It’s 15% lighter than the previous EVA foam, feels a touch softer, but keeps the nice bounce. Paired with the rocker geometry, this shoe feels great rolling through the miles. The rubber placement has been moved around slightly, but I didn’t notice any differences in the wear. This shoe will definitely last hundreds of miles.

JEREMY: If you liked the Clifton 7, you’re going to love this iteration as well. The upper is largely similar, there is still the breathable engineered mesh that fits comfortably. The gusseted tongue still lays gently against the top of the foot without shifting, and the extended ‘elf ear’ heel collar still holds the foot in place. The stack height is still 29 mm with a 5 mm drop, and the classic meta rocker geometry works well to keep your foot rolling through each stride.

New foam, who dis? The Clifton 8 comes with a lighter EVA midsole foam. I would say this is certainly noticeable, as the shoe feels less firm than the 7. So much so that at times it feels like you are running on pillows.

The outsole includes a little extra rubber, but I would expect durability to be largely similar to the previous generations (which for me has been around 500 miles)

ROBBE: On my first run in the Clifton 8, I was like, “Oh, okay, I get it.” It’s not a ‘wow’ bounce like Pebax midsoles these days, but it’s more like a ‘this is a very comfortable and easy ride that I could get into’ type of wow. EVA can suck if it’s put in the wrong hands, but HOKA has somehow mastered the art of the EVA midsole even while its competitors are moving to lighter and bouncier pastures somewhere in the product line.

But no matter, the Clifton 8 provides everything you need in a really lightweight package for a daily trainer that can get you hundreds of miles.

I gotta say, this upper is really nice. Just insanely plush and comfortably. Reminded me a lot of the Altra Torin Plush 4.5 which is one of the most comfortable uppers ever in my opinion. With the extra padding on the tongue, you get a really good lockdown on the top of the foot.

With such a light weight and HOKA’s classic MetaRocker technology, the miles just roll along at an easy clip. There isn’t much else to say beyond what Meg and Jeremy have covered. It’s a great shoe that also looks pretty sweet in this Aquarelle (major kudos for that word usage, I legit thought HOKA made it up) colorway.

MEAGHAN: HOKA created a lighter midsole foam, kept the upper nearly identical, and yet, somehow this shoe gained weight. My W7.5 came in at 7.7oz (the Clifton 7 was 7.4oz). I’m honestly not upset about it and didn’t notice it out on the run, but this was the only negative thing I had to say.

JEREMY: This shoe feels significantly softer than the previous versions, this is certainly noticeable when you pick up the pace. For me, when I was doing some hard strides in the Clifton 8, it felt pretty tough to get a fast turnover up to a faster pace. This won’t be a problem if you use this shoe for easier days, so not a big concern. Additionally, I found this shoe actually took a bit of time to start feeling comfortable on my foot. The first couple runs, it fit quite narrowly on my feet, but after around 15 miles of running this was no longer an issue.

ROBBE: Nothing really stood out to me here, other than the fact that with a plush upper, things will tend to get warm, especially in the summer months. Now, that’s a tradeoff you have to take for comfort. Not really a bad thing, just wanted to point it out. HOKA ONE ONE Clifton 8 Conclusion

MEAGHAN: The Clifton 8 did not disappoint. HOKA kept all the great qualities of the previous iteration, but changed up the midsole composition (for the better). It’s a comfortable shoe with a smooth ride that I would recommend to just about anyone. And, if you’ve got some voluminous feet, they come in wide.

JEREMY: Another home run for the HOKA team on the Clifton line. The Clifton 7 was my pick for trainer of the year in 2020, and so far the Clifton 8 would be my pick for 2021. I’ve run 80 miles in this shoe, and nearly every run has been a delight. The soft ride of this foam has my legs feeling pampered on easy days and long runs. It really is a marvel to have my legs nearly fresh after a 16-mile run, but that’s what this shoe provided. Ten out of ten I’d recommend the HOKA Clifton 8 for easy runs and long runs. Oh, and they’re vegan by the way. For $130, this is one heck of a deal for a shoe I would personally expect to get 500+ miles of running in.

ROBBE: Not gonna lie, I get the fandom behind this shoe. And for $130, you really can’t beat it if you’re looking for a daily trainer with max comfort that has proven to be excellent, time and time again. Too many companies take a good shoe and f*** it up to try and keep things fresh (Brooks Launch, anyone?). HOKA did that with the Clifton a few years back, learned their lesson, started making a great shoe again, and haven’t looked back since. Give the people what they want – is that too much to ask?

You can pick up the HOKA ONE ONE Clifton 8 for $130 on June 1 at Running Warehouse (featuring free 2-day shipping and 90-day returns) by using the shop link below.