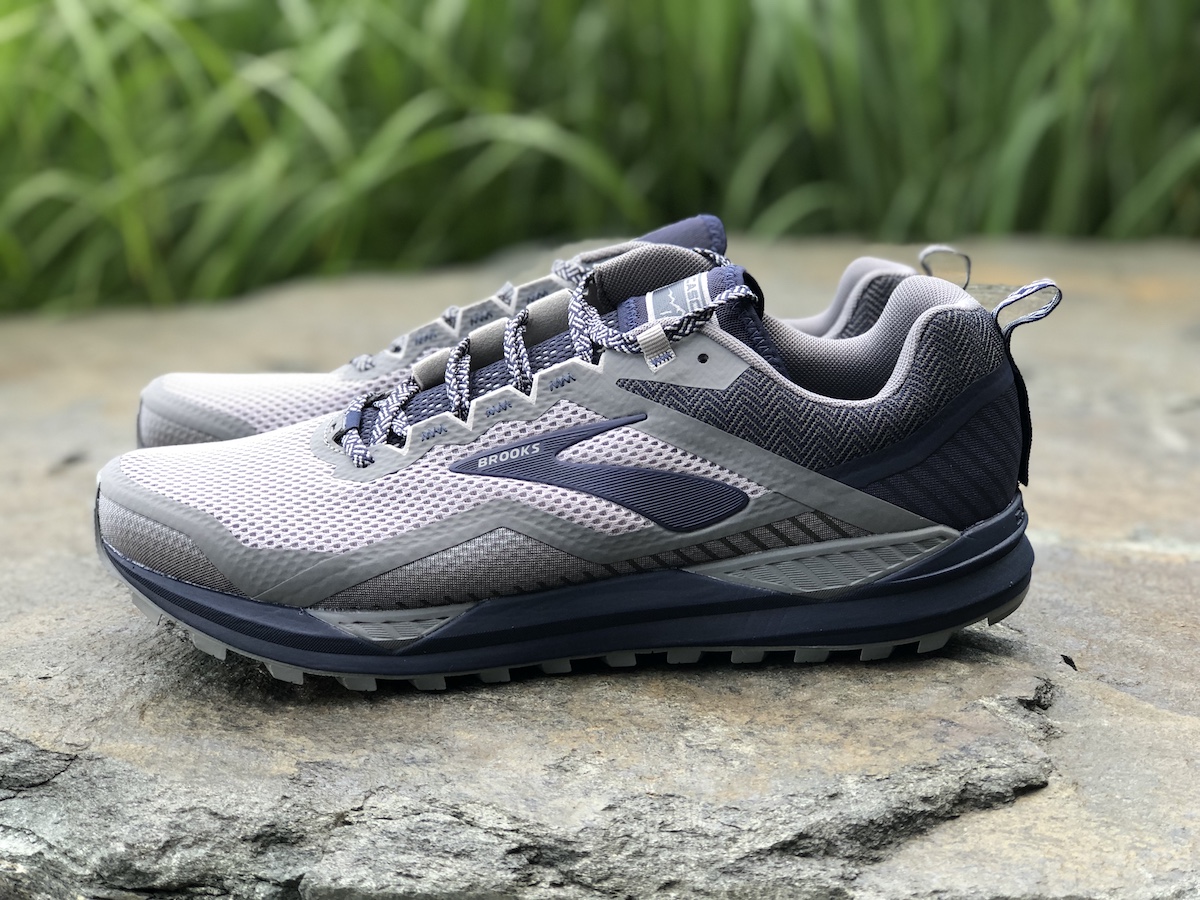 Taylor: If you’ve become a dirt convert during the trail running boom of the last decade, there’s probably one shoe you’ve either owned or looked into at some point: the Brooks Cascadia, a legend in trail running footwear. Some may even call them the OG of trail shoes.

And so, like the inevitability of snowmelt on a spring single track, the perennial classic returns with the Brooks Cascadia 14.

In the newest version, Brooks sticks to the formula of what they know works. They have slightly increased the Cascadia’s “SUV-like” ride by adding a touch more stability– an aspect of the Cascadia that has aided its continued popularity over the years.

The Pivot Post System is mostly responsible for the stable ride. At select points throughout the shoe, the Pivot Post System helps keep your foot level with the ground as contact is made and through toe-off. Another keeper to this edition is the heavily fortified midsole for confidence on rugged trails.

The changes that were made mostly come with the task of durability. Out of the box, this year’s additions make the Cascadia 14 look a whole lot like a less-athletic cousin to the Salomon Sense Ride series (lace “garage”, outsole, heel-toe-drop, internal “saddle”, upper).

Though they don’t feel the same underfoot— like, at all– a lot of the technologies function quite similarly. Highlighting the changes are the new TrailTack outsole for improved traction and weight shedding, a full internal saddle system to add security, and the Cordura Mud Guard in the upper for more all-conditions confidence.

Aside from specific technology changes, the Cascadia trimmed down a bit to 10.7 oz for men and 9.5 oz for women (1.2 oz lighter than its predecessor). Along with the cuts, the new package comes with 2mm less drop to make it 8mm.

Erin: True to Taylor’s word, the Cascadia 1 was actually my very first trail shoe (back in the early 2000’s). To me, it was heavy/clunky and stiff. I was so unimpressed, it was 6 or 7 years before I bought another pair of trail shoes.

The Cascadia 14 is a completely different shoe, in a good way.

Jarrett: In the world of trail running, the Brooks Cascadia is kind of like Panic! At The Disco (for those of us under the age of 35). For those over 35, we’re talking Hall and Oates. Everyone knows who they are, at one point liked some of their songs, maybe at one point regretted liking all of their songs, and are currently shocked to realize they’re still making songs.

The good news is that Brooks put out a chart-topping banger and there’s no reason the Cascadia 14 shouldn’t go platinum.

I’ll chime in with this: Cascadia– you make my dreams come true. Oo-ooo, oo-ooo. Taylor: What’s good on the Cascadia is what has always been good– stability. If you’re new to trails or typically need a little extra something in a road shoe, this is a great intro-to-trail-running shoe. It is as stable as Brooks claims.

Over all terrain that I tested these shoes, they stayed comfortably upright while the midsole covered all the bases in terms of protection. The shoe fits very comfortably and had a nice hugging quality to it.

My favorite aspect of the 14 is the upper. Like the midsole, it seemed to cover most needs in terms of being durable. It is also the most breathable upper that I have experienced on a trail shoe. This scored a boat-load of brownie points with me.

Erin: My expectations coming into this shoe were low; however, I was pleasantly surprised by how much I liked running in this. It has shed a lot of weight, even over the 13, and that– combined with the 8 mm drop– make the Cascadia 14 feel almost nimble on the trails. This has to be one of the best updates out there.

The traction on these shoes is also fantastic. I’ve done a few muddy runs in them and have been consistently impressed by the grip. They feel stable and secure, and they drain well. The tongue is integrated and doesn’t move around at all, and is nicely padded without being too much.

Also, I feel like Brooks is really knocking it out of the park lately, style-wise. When I took these out of the box I was struck by all the design details. From the herringbone pattern of the upper to the matching laces and heel tab, the colorway I received (black, red, and coral with gold accents) is all-around very sharp-looking. There’s even a lace garage! Very Salomon of you, Brooks.

Jarrett: The first time I put on the Cascadia 14, I knew my wide feet would be happy. I immediately noticed how the full internal saddle kept my foot locked down. That lockdown feeling continued out in the wild and made running up and down hills so much more enjoyable.

One of my complaints about the Cascadia 13 was that the heel collar was overly padded and became squishy when wet. The new collar is so much better! Obviously Brooks is listening to me, so you’re welcome everyone *Jarrett smiles and waves to Brooks*. It’s still padded, but not suffocating.

The new Cordura mud guard did a fantastic job protecting my feet from rocks and debris. The guard is no longer a printed overlay, so it actually allows the foot to breathe and let water drain well.

All of my runs in the Cascadia 14 were fantastic. The BioMoGo midsole (like in the 13), had enough responsiveness to make quick steps easy, but also provided a great amount of cushion. My transitions during hilly switchbacks and bombing downhill were so smooth. Even with the cushion, I still was able to get a good foot feel for the trail.

The new TrailTack outsole is a much-improved addition over the previous rubber. It has much better grip and the lug design cuts some weight while improving the shoe’s flexibility.

Confession time: I’m the type of trail runner who is going to go avoid mud, puddles, and stream crossings as long as I can on a run. I like to channel my inner child and just pretend everything is lava. Once I no longer have a choice, I’m all in for getting dirty.

The grip was great on both dry and wet surfaces and I never felt the lugs bothering the bottom of my feet.

It’s summertime, which means everyone is dieting and YouTubing 8-minute abs in hopes of getting a “beach bod.” The Cascadia must have been grinding real hard over the winter because it’s in the best shape of its life! I compared my 10.5 2E Cascadia 13 to the 14 and it went from 13.1 oz. to 11.9 oz.

Keep your eyes peeled, you may see it in a lifeguard chair at your local beach.

Brooks does a really good job at describing to you what you will get with the Cascadia’s – an “SUV-like” ride. Personally, I do not look for that in a trail shoe. I don’t need a whole lot of support in the stability department. Nor do I desire to have a midsole that completely removes ground feel.

Because of the over-emphasis on those points, the Cascadia one of the few trail shoes I have worn that actually resisted higher-tempo/speed. As my foot prepared for toe-off, I felt that the forefoot would have too much push-back to transfer that momentum forward effectively.

Look, I know this isn’t the Nike Terra Kiger 5, but I like to have the option to kick up the pace. I really don’t think this is the shoe for that.

Erin: I really don’t have many complaints about this shoe. It doesn’t provide the ground feel that I prefer with a trail shoe, but I’d never expect that from a Cascadia, and that’s not the point of this shoe. I’d also say they’re a tad narrow (to me) in the midfoot, and they tend to run a little hot, but it’s also been in the nineties out here. But otherwise, no issues.

Jarrett: I’m at a loss for words because I really don’t have any big issues with the Cascadia 14. Bravo, Brooks. You got me to shut up.

Taylor: For sure, Brooks has made some worthwhile changes to the Cascadia line. They fit nicely and are incredibly stable on the trails.

This isn’t a shoe that will help you get a CR on your local trails; however, it will provide a whole lot of protection and stability. Though I am not a fan of having that much support, it might be what you’re looking for if you typically wear a stability road shoe, are brand new to trails, and/or are looking for a lightweight protective hiker.

Erin: The Cascadia 14 is a fantastic update to Brooks’ trail workhorse. Lighter, more responsive, and pretty sweet-looking, too. I’ve got about 30 miles on these so far and they show no signs of wear, so I’d imagine this is a shoe you could get quite a few miles out of.

Jarrett (still hasn’t shut up): I really enjoyed the Cascadia 13, so once I heard about the updates to this version, I had high, high hopes. The Cascadia 14 exceeded those hopes in every way.

While it may not be the lightest or fastest trail shoe out there, the Cascadia could easily be used in just about every setting. I think it works from any distance of trail run to a casual walk, or even an extended hike. The Brooks Cascadia 14 will easily be my go-to option whenever I step foot in the woods.

It’s also just a damn fine looking shoe (Robbe made me add that).

You can pick up the Brooks Cascadia 14 for $129.95 at Running Warehouse by using the shop link below.