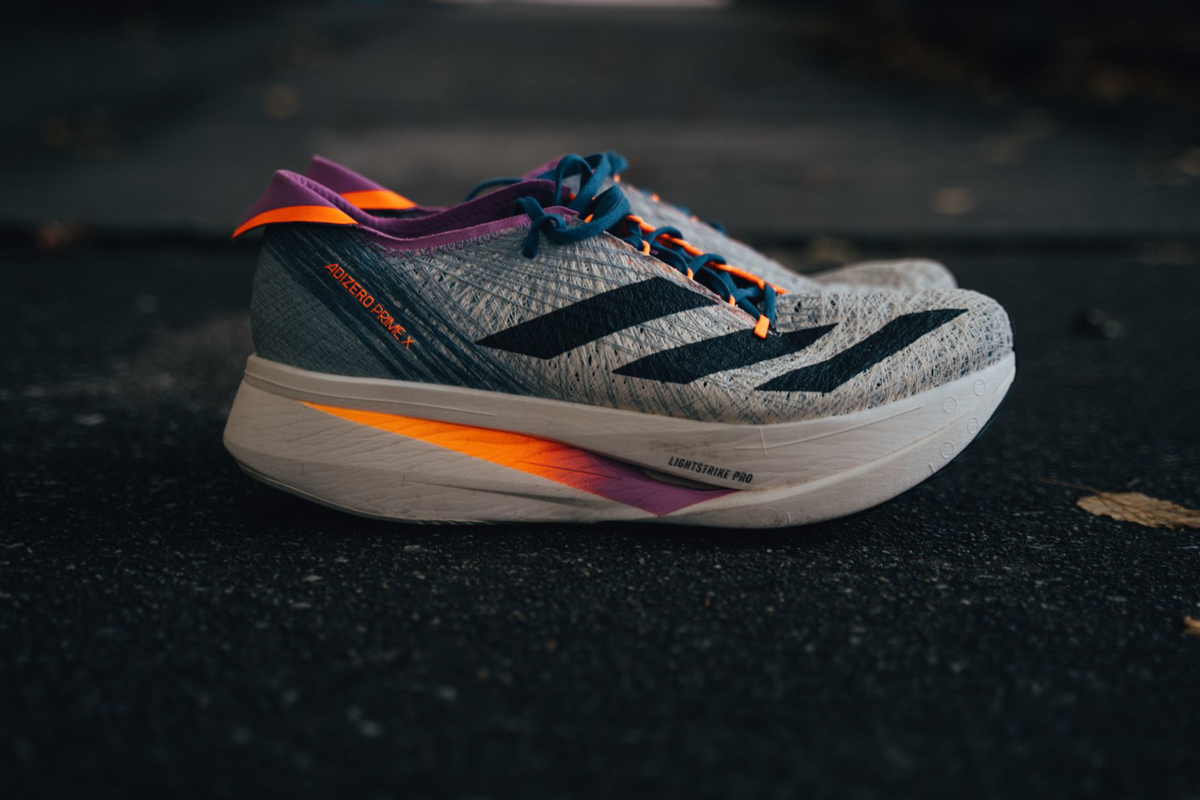 MEAGHAN: I missed out on the original Adizero Prime X, so I was pumped to test out the Adidas Adizero Prime X Strung, a version of the shoe featuring a (you guessed it) strung upper.

What exactly is “strung?” It’s the latest tech-meets-shoe initiative from Adidas. Using athlete data, they’ve mapped out and programmed different fiber properties thread by thread so that you get an upper that’s designed for support, flex, and breathability, all in one piece of material. Basically, the upper acts like a cocoon that hugs the foot without feeling overly snug. I absolutely love it.

Enough about the upper. You’ve probably heard about the original Prime X because of its very aggressive stack height (49.5mm heel/ 41mm forefoot), which far exceeds the legal limit for elite athletes on race day. Nothing has changed in that department. It’s still the most cushioned midsole of any Adidas shoe ever, with three layers of Lightstrike Pro and carbon-infused EnergyRods. This combination provides one heck of a bouncy ride.

While this shoe’s stack height makes it illegal for racing, it’s ‘primed’ for those speedy long runs. But is it worth the $300 price tag? Let’s get into it.

THOMAS: The first Prime X was a miss for me. I rarely stop a run due to a shoe issue, but I had to pull the plug eight miles into a 10-mile run in that first version of the shoe. Before I signaled the coach to throw in the towel, I folded my ankle three times. Anytime I encountered uneven pavement, my ankles wobbled and trembled on top of the 49mm stack. Three times was a charm, four times was harm, so I gave it up and didn’t come back.

Some time later, I was talking to Kofuzi about my issues. He had a lot of love for the Prime X, so I decided to give the shoe another try on flat, even ground. This time I didn’t hate it, but it still felt like I had to work hard to stay on top of the stilts. I wasn’t expecting much from an upper-only update, but I remembered how an upper update on the Saucony Endorphin Pro+ totally changed my thoughts on that shoe, so I was willing to give this one more go. And boy, am I glad I did. MEAGHAN: When I first picked up the Adidas Adizero Prime X Strung, I assumed it was just an attempt to make the shoes more eco-friendly. It reminded me a lot of the Alphafly Nature (a shoe that I didn’t exactly love). However, despite the rugged looking upper, I found the shoes to be extremely comfortable. The upper is breathable and supportive with a generous fitting toebox, perfect for my wider foot shape. While there isn’t much padding through the collar and tongue, the shoes feel great upon step in. Maybe it’s all the stack underfoot? Either way, there’s a plushness about this shoe that’s felt immediately.

Speaking of stack, three layers of Lightstrike Pro paired with carbon EnergyRods provide all the bounce and zero ground feel. It’s easily one of my favorite qualities in a shoe. It’s like running on mini-trampolines and feels great from mile 1 to mile 20. The Continental rubber outsole adds plenty of traction and durability — my pair still look brand new after more than 50 miles in the shoe.

THOMAS: I took the Prime X Strung out for an easy six-mile run to try it out. Other than the birdnest-looking upper, I didn’t see much of a difference in this version, but holy smoke, this shoe was a huge improvement. My foot locked into the upper and stayed securely over the massive Lightstrike Pro midsole. With my foot secure, the benefits of the platform sang. I bounced my way to a joyous six-mile workout and followed it up with a 20-mile training run and a 12-mile race sandwiched in the middle. My legs felt so good after the long workout, it felt like cheating.

I tried to see what the difference was between the first version and the new Strung upper. I took the Prime X out for another run and produced a hypothesis. In the original Prime X, the upper construction had my right foot coming over the lateral edge. This created a scenario where I was constantly battling to keep my foot squarely over the midsole. On the medial side, everything was fine. I am not sure if the sloppy right shoe was an anomaly or if it was just the way that the upper worked with my foot. No matter, I don’t have any issues with that problem in the Prime X Strung. MEAGHAN: To me, Adidas foams always feel denser than other brands. I often find their shoes feel bottom-heavy, and the Prime X Strung fell in that category. I didn’t notice it nearly as much as I would in a race-day environment, but definitely something to note.

THOMAS: Adidas has the hardest to lace shoes in the industry. You need to do micro adjustments versus yanking from the top of the throat to tighten the fit. Either use fewer holes or find laces that glide better.

Even though the Adizero Prime X Strung fit better and solved my major issue with the Prime X, I wish that the midsole came up and cradled the foot to create more stability. Right now, you’re sitting on top of all 49mm, so having the side of the midsole extend up would help secure the foot and give runners more confidence, especially in turns.

Also, $300 for a pair of running shoes is gonna put the shoe out of reach for the majority of runners. If you can part with that kind of coin, then you won’t be disappointed, but I can understand if runners choose to get two or three trainers instead of just one. MEAGHAN: The Adidas Adizero Prime X Strung wins for “most fun shoe” in 2022. It’s like wearing bouncy castles on your feet. I love the aesthetics, I love the overall fit and feel, and of course, I love the nearly 50mm of stack underfoot. If you’re not into “ground feel” or just want a faster long-run shoe, go ahead and drop the coin for this one.

THOMAS: I’m in love with the Adizero Prime X Strung. It bounces through the miles, and after the big mileage, your legs still feel fresh. It doesn’t hurt that the shoe looks beautiful. In fact, it may be the best-looking shoe I tested this year. I hope to see the Strung upper on more Adidas trainers. The Prime X Strung is by far my favorite Adidas running shoe right now, followed by the Takumi Sen 8 and then the Adizero Adios Pro 3.

You can pick up the at Adidas Prime X Strung on October 1 by using the shop link below.