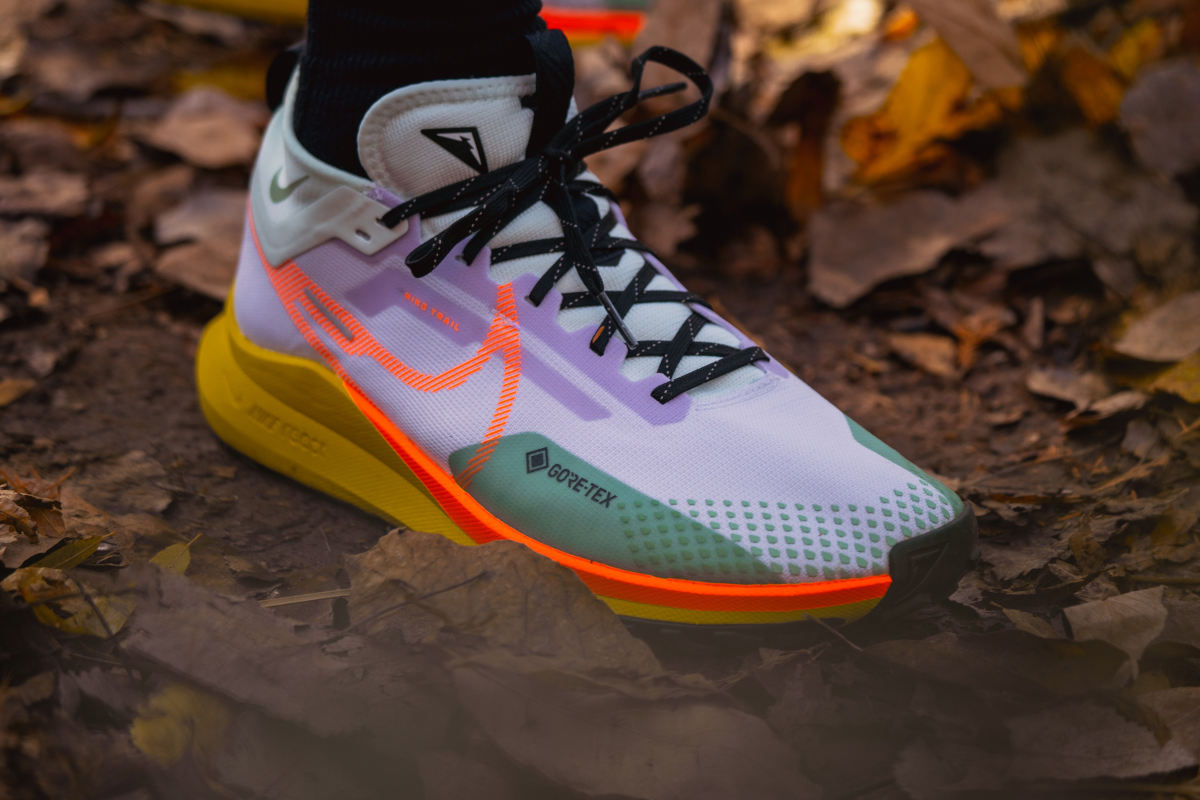 This review is sponsored by Bombas socks, which we’ve been using to keep us warm and comfortable this winter (especially the merino calf sock below). You buy one, they give one to someone in need. Use code BITR20 to save 20% off your first order!

ROBBE: Some people like collecting art (like Wide Foot Jarrett and his Cactus Flea Market Happy Meals), and some people like putting art on their feet. Over the last several years, Nike has undeniably made some of the most beautiful looking and eye-popping designs on the trails. They were kind of the first to dive into the “white trail shoe” game (though the Kiger 4 was actually grey); now every brand seems to have one.

“BuT wHy wOuLd yOu wAnt A wHitE tRaiL sHoe?” Idk, because some people like to show that they actually run in their shoes? Let them live their lives.

Anyway, Nike is back with another white-ish colorway in the initial launch of the Pegasus Trail 4 GTX (Gore-Tex). And we did get it dirty.

But before we got it dirty, we had some concerns *proceeds to furrow brow*: If you follow us here at Believe in the Run, you know we have long bemoaned the state of Nike Trail outsoles. For years, Nike has consistently produced the worst outsole in the trail game, using a rubber that’s slick from the outset and neither sticky or grippy until about 50 miles in. I swear there’s a designer with the last name El Sol that’s just out to slander the character of rain. Because every time past Nike shoes come in contact with H20, they feel like rollerblading on marbles. Now I will say, there seems to be a hardened layer that eventually wears off and the rubber softens up as the shoe wears down. But even then, traditional Nike rubber remains mediocre at best. The standard Pegasus Trail 4 seemed to have a bit better traction, but it still wasn’t acceptable for anything other than fire roads. So would the GTX version just be the same? Well… no. And for that, we rejoice.

Of course, as this is a Gore-Tex version, the upper of this shoe is waterproof (not the entire upper, more on that later), and slapping that GTX technology kicks up the price a notch. Aside from that, the midsole remains the same as the Pegasus Trail 4– a full bed of React foam, a wider toe area over the Pegasus Trail 4, and decently weighted at under 9 ounces for my men’s 7.5, under 10 ounces for the standard size 9.

Honestly, I would’ve just copied and pasted the Pegasus Trail 4 review if only the upper had changed. But so much more has changed, and it’s deserving of a full review, because, simply put– this is one of the best shoes of 2022. ROBBE: I’ve reviewed several versions of the Peg Trail at this point, and most other Nike trail shoes as well, so I will continue to give credit where credit is due. The bed of React in Nike Pegasus Trail provides one of the most comfortable rides out there. It’s so nice. In fact, this is always the first shoe I recommend to anyone looking for either a great walking shoe or the best road to trail shoe. I’ve known several people who use the Peg Trail solely as a road shoe and love it.

For the purposes of this review, I took it on both road and trail and loved it in both scenarios. The lug depth isn’t so long that you feel it on the road, but it’s enough to give traction when needed on the trails. The ride is just really nice and responsive; to me, it maintains that perfect balance of comfort and enough energy return to pick it up when you want to. It’s really one of my favorite midsoles in general.

The upper on this shoe fits great for the most part. Aside from some very minor issues, the lockdown is solid, the laces don’t put pressure on the top of the foot, and there’s no heel movement. There’s much more room in the toe box compared to the Pegasus Trail 3, so your toes don’t feel cramped and they have plenty of room to splay, something you don’t get very much in Nike shoes. Very nice to see it here. I have seen multiple user reviews that claim the Gore-Tex upper isn’t waterproof, but I had no issues with waterproofing… to an extent. The lower area of the upper is indeed waterproof. However, the tongue meets the shoe halfway up, so at that point you can kiss the waterproofing goodbye, because water will clearly get in. But for shallow puddles and creek crossings, your feet will stay dry.

I submerged the shoe about an inch and a half into a creek for thirty seconds or so, and my foot stayed completely dry. Same with a rainy run on city streets here in Baltimore. (If you want to learn more about how Gore-Tex waterproofs shoes, read this interview we did with the head of innovation at Gore). Now, Gore-Tex says that their waterproofing doesn’t affect breathability, or that they’ve found a way to still make it breathable, but the fact remains– it’s just not as breathable as a standard trail upper. It’s not as warm as the full Dyneema used by Norda, but it’s not as breathable as the Hoka Tecton X. Or the standard Pegasus Trail 4. But you know what? I’m okay with it. After all, I want to use this shoe in the snow and cold and rain, and yeah, I kind of want a warmer shoe for that. And then there’s the outsole. I have no idea what Nike did, or why it was rolled out on this model, but 100%, without a doubt, this is a new rubber compound. It’s sticky, it’s grippy, it can definitely handle wet surfaces, and I can finally say this is one of my favorite trail shoes at the moment, easily top 5. I took this on a 7-mile run that included a bit of road, some dirt single track, and then just the shittiest conditions of wet, leaf-covered rocks on the Central Pennsylvania portion of the Appalachian Trail. Let me be clear– this shoe is not meant for those types of trails. There’s just not enough underfoot protection or rock plate from the constant pounding of rocks underfoot. But over wet rocks and slick leaves– and even some wet wooden boardwalk and log creek crossings– it handled very well. Like, I was shocked at how well it performed. I’m not convinced it’s at the same level as, say– Vibram MegaGrip– but it is so much better than any other Nike shoe in the past.

I really loved this shoe on more mild trails. It just adapts effortlessly to whatever pace you’re going for, and has enough ground feel to get you in a groove on the trails without sacrificing comfort. And on roads, it’s more than capable of delivering a solid ride.

Lastly, damn does Nike know how to style a trail shoe. They just don’t miss.

One more thing– certain colorways of this shoe see major discounts quite often, so you can often find it for around $100 (this certain colorway is available for $94 right now on Running Warehouse). ROBBE: Like I mentioned above, the Pegasus Trail 4 GTX should stick to medium to mildly technical terrain. It can handle rocks and roots, but for super sloppy conditions the lugs aren’t deep enough. Even on layers of leaves, instead of digging into the leaves, the lugs would kind of just push the top layer back through the stride. None of this is really a bad thing, because it’s not a super technical shoe to begin with, it’s definitely designed as a more road-to-trail shoe. I’m just saying what it’s not great at.

Now, the Gore-Tex upper has some interesting spots. Whereas the Pegasus Trail 3 membrane went pretty much to the top of the tongue, this upper is really only waterproof until midway through the tongue, where it’s stitched into the upper. That renders anything above that line as pointless waterproofing, because if it gets in there, it doesn’t matter if anything above that (i.e. the ankle collar) is waterproof.

Speaking of the ankle collar– is it really necessary? Because if it doesn’t add a higher waterproofing level, then I’m not sure why it’s needed except for looks. I guess it’s better than nothing at keeping out debris, but it’s somewhat loose around the ankles and does the “largemouth bass” thing when it flexes.

One thing about the Gore-Tex– it’s supposed to be a lifetime of waterproofing– that quality is what Gore-Tex stands behind. But my Pegasus Trail 3 GTX blew out in less than a year. I wore it a good amount, but not for the hundreds of miles expected from a trail shoe. I retired it because my feet would get wet in the lamest scenarios. Literally, walking through the morning grass at my kid’s soccer game would result in wet feet. My original Hoka Speedboat Mid WP (with non-Gore-Tex waterproofing) took like three years to blow out and I abused the hell out of them. That said, I’m pretty sure Gore-Tex has a lifetime guarantee, so if it does malfunction, you may be able to get a refund for it.

I should also note that I’ve seen an abnormal amount of user reviews on both Nike’s website and other places that contend the upper is not waterproof, which leads me to believe there may be some quality control issues. Again, I had no issues with mine, but it may vary from pair to pair. Good news is that Nike is good about replacing bad shoes and Gore-Tex has a lifetime guarantee so you should be covered on both ends should you get a defective product. I’m definitely wearing these throughout the winter, so will come back and update this review if I find any issues on my end.

Because of the way Gore-Tex uppers are structured with a membrane, you may get a little bunching of the tongue at points when you tighten the laces, but it really didn’t affect the feel on the run. ROBBE: This is hands down one of my favorite running shoes, just in general. For pure comfort, I’ve worn the Pegasus Trail probably more than any other shoe over the last year and a half, and I have no plans on changing that. It’s a fantastic walking shoe, light hiking shoe, road running shoe, and of course– trail running shoe. I already loved the standard Pegasus Trail 4, but this GTX version with a redeveloped outsole elevates the Peg Trail to a whole new level.

If you’re looking for a great do-it-all shoe that you can wear for literally anything– then I can’t recommend a better shoe than this.

You can pick up the Nike Pegasus Trail 4 GTX for $160 (oftentimes less) by using the shop links below (at the time of this review, Running Warehouse has the review colorway for $94).