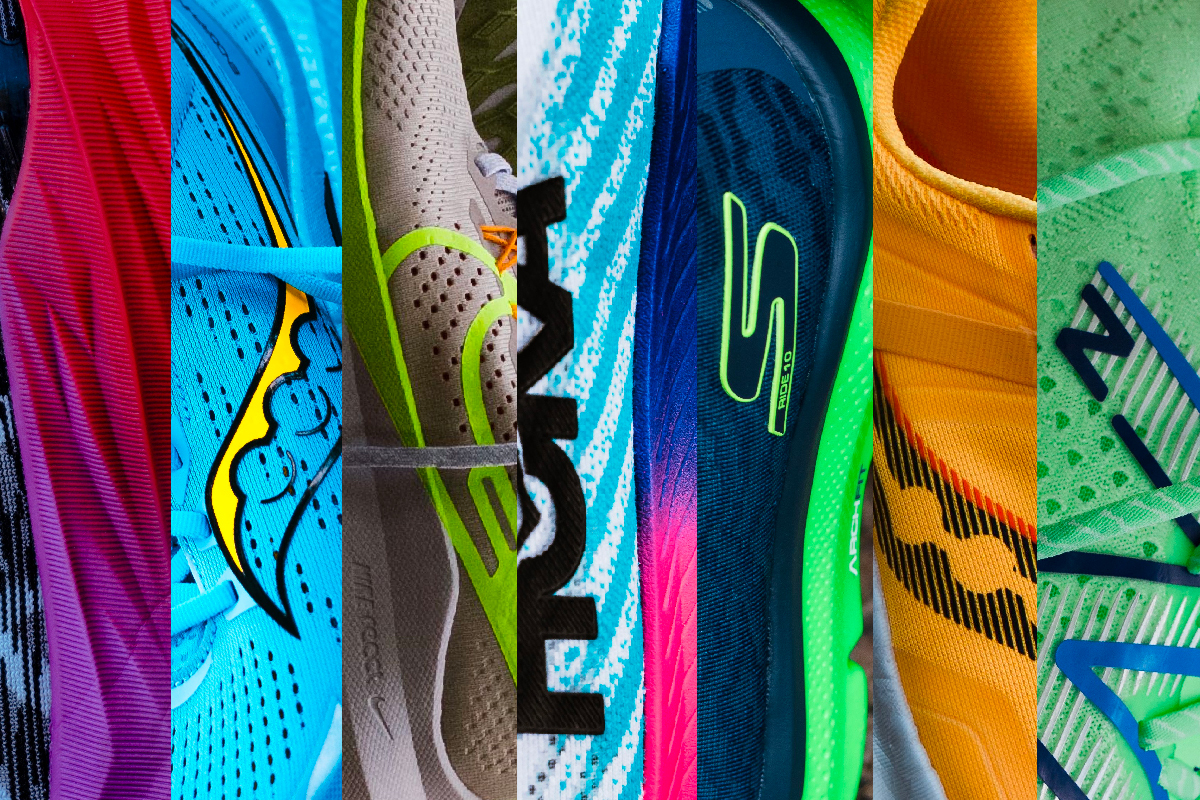 Building a running shoe rotation can be intimidating, especially as a newcomer. How many shoes are enough, and how many are too many? Well, for some people, the answer might be just one shoe. A few running shoes seem to handle anything you throw at them with a smile, and this is our tribute to them. As Kevin from The Office might say, “Why waste time have lot shoe when few shoe do trick?” Here are seven of the most versatile running shoes.

Even more great shoes: The best running shoes of 2022 (so far)

All right, so these shoes can’t do literally everything. They won’t let you fly, they won’t cook you dinner (lame), but they can help you get your miles in. We’ve primarily focused on some road-ready picks, as that’s where many people start their running careers. However, we’ve got an option that can tackle both roads and trails and a selection for the stability crowd. We’ll do our best to highlight where certain shoes shine brightest, but any one of these running shoes will serve you well for hundreds of miles.

As always, we base our picks on our own experiences. We run a ton of miles as a team (at least when we’re not slashing our legs on broken glass), and we let our legs do the talking. You can check out our written reviews for each pick and YouTube reviews for most of the shoes in case you want to hear it straight from the horse’s mouth. All right, let’s get on with it.

NOTE: We may make a small commission from some of the shop links below, so if you pick up a shoe on the list, thanks for helping us out! Get ready for us to sound like broken records, but all of the most versatile running shoes come with hype trains that are a mile long. There’s no better example than the Asics Novablast 3. We’ve been talking this shoe up since the start of Summer GRIT, even though it wouldn’t become available to the public until September. That’s when you know it’s really, really good. We even got 200 miles into the shoe before filming our review — something that never happens with how many shoes we get.

Maybe there’s an element of “look good, run good” going on here, but we can’t complain. The Novablast’s angular midsole looks like it was dropped out of Dragonball Z, and the Flytefoam Blast+ is over 9,000 in terms of comfort. Within two sentences of her review, Meg was already praising the versatility, declaring the Novablast 3 as comfortable at mile 20 as it was at mile 1. There’s plenty of foam underfoot, and the 8mm drop is just about the sweet spot for everyday usage.

Did we mention that the shoe even lost some weight? Thomas’ US M10 lost almost an ounce and a half while picking up some extra cushion, which we’ll never complain about. If the road-ready Novablast 3 isn’t versatile enough for you, there’s also a trail version with a little more aggression in the almost invincible midsole. Good for: Runners looking for some excitment in a daily trainer | Drop: 8mm | Price: $170

Saucony’s Endorphin Speed is no stranger to our running shoe hall of fame, but we can admit that we weren’t sure how it could possibly get better. Well, the answer is by making it even more versatile. The latest edition of the Endorphin Speed features a retooled midsole and nylon plate that provide extra stability without sacrificing the speedy pop. It’s one of the most versatile running shoes, and it’s become one of our go-to picks when we can only take one shoe on the road.

The extra PwrRun PB in the midsole lends a softer feel to Saucony’s tempo trainer, making it a more comfortable option at easier paces. We readily admitted that the first two versions felt like tap dancing on the head of a pin, so the extra underfoot presence is a welcome change. Although a winged plate sounds like what I order at a sports bar, it means that the curved hunk of nylon relies on two stabilizers to keep you from toppling over. No matter the shape, it works.

If there’s one piece of the Endorphin Speed 3 that’s not so versatile, it might be the colorways. The Blue Angels-esque version we received felt like it dropped out of an Eiffel 65 song, and it can be tough to match with the rest of your running wardrobe. If you don’t care about that, then you’ll not find too many better values. This is a whole lot of shoe for $170. We did promise that not all of our most versatile running shoes are born on the streets, did we not? Here you go, trailheads. Well, maybe you aspiring road-to-trail heads who also want to walk around Disney World with your family. Either way, this is the shoe for you. The Nike Pegasus Trail 4 is quite possibly our favorite version of the off-road workhorse with wings, which is saying something. It’s comfortable, reliable (in dry weather), lighter than the Peg Trail 4, and a straight-up stunner.

For the Pegasus Trail 4 to be the best, you might think it had to undergo some major changes, but that’s not the case. Instead, it trimmed a little fat, reworked the outsole rubber, and kept the comfortable React foam right where it belongs. We like the new, more structured upper, too — it fits like a glove, a well-worn, durable work glove. There’s also a Gore-Tex version for those who don’t live in a state of perpetual sunshine, which is everyone outside of San Diego.

If you’re one of the masses who have to deal with rain, maybe this isn’t the do-it-all shoe for those days. Even though Nike reworked its outsole formula, wet weather is still the Pegasus Trail 4’s Achilles’ Heel, so be careful. Seriously, be careful. That settles it, the Hoka Mach 4 wasn’t a fluke. If anything, the Mach SuperSonic was the fluke, and the Mach 5 is a return to flying form. Chim-Chim would be so proud. You might not have expected big things out of the ProFly+ midsole after it pretty much flopped on the SuperSonic, but Hoka seems to have turned garbage into gold. The Mach 5 is one of the most versatile running shoes, and it’s not hard on the eyes, either.

While you could do a whole lot with the Mach 5, our team seemed to think it performed best as a short-to-medium daily and tempo trainer. Hoka’s softer, Supercritical ProFly+ sits on top of a denser layer of rubberized EVA foam, which was great for absorbing those GRIT miles. The upper hasn’t changed much since last year, but we certainly won’t complain — Hoka’s mesh is light, breathable, and offers enough room for your toes to spread out, even with wider feet like Meg’s.

We’re probably not really supposed to rate shoes on their colorways, but we do anyway. Lindsay’s white with copper hits was stunning (for the miles it stayed clean), and Meg’s version looked like a classic 90s foam cup, which is just the right level of nostalgia for our tastes. Skechers is something of a sneaky brand. Yeah, it was the one liable to get you made fun of back in the day, but now it’s one that you have to tip your hat to. The folks at the Skech’ have been doing Supercritical foam as long as anyone, and they do it right. It’s the star of the GoRun Ride 10 show, but it’s not the only actor. This is one of our most versatile running shoes because it has some bounce, some comfort, and it won’t even break the bank in the process. In fact, whenever a new runner comes to us asking what shoe they should get, we just tell them to get the Ride 10 because we know it’ll work for anyone.

Most of our reviewers had nothing but love for the GoRun Ride 10 during their miles. The Goodyear rubber is grippy as hell (there’s a reason they make tires out of it), and MStrike technology sings if you’re a midfoot striker. Skechers went for a subdued navy colorway on the GoRun Ride 10, but the shoe itself is anything but subtle. We found ourselves drawn to go faster each time we laced up, accidentally hitting a half marathon in the process.

If you’re not a classic Skechers fan, you might want to give the GoRun Ride 10 a test before buying. We’ve had issues with a few of Skechers’ uppers in the past, particularly in the toebox. You might also have trouble if you’re not a midfoot striker, as MStrike can feel downright unnatural otherwise. Stability and sex appeal. Two things that have almost never, ever, ever gone together — at least until summer 2022. Then, the Saucony Tempus happened. Just like the Pegasus Trail 4 was our pick for the trail junkies, this is our most versatile running shoe for the stability crowd. It’s equal parts stable and speedy and could almost be an Endorphin if Saucony hadn’t already perfected that family tree. Did we mention that this beauty is a freakin’ stability shoe?

The Tempus has a healthy chunk of PwrRun PB through its midsole, which isn’t inherently stable. However, it’s locked in place with a stiffer cradle of traditional PwrRun that comes up higher on the medial side. The PwrRun does its job better than we might have ever expected, and it takes all the fear out of the squishy PB — this isn’t dangerous in the way that early Endorphin Speeds were. There hasn’t historically been a ton of versatility in the stability scene, so it’s incredible to see some new life in a previously overbuilt category. If you’ve been around even a little bit, you know how many miles we’ve put into this final shoe. The New Balance FuelCell SC Trainer has been the powerhouse behind our Train to NYC campaign, and it’s found a spot in all of our hearts. We weren’t entirely sold at first — it arrived as a big, heavy trainer, but everything changes when you get the massive slab of FuelCell underfoot. This is the most versatile running shoe you could ask for if you’re training on your way to your first marathon.

For starters, this is an illegal amount of foam. There’s so much FuelCell underfoot that this bad boy is breakin’ the law, at least in the eyes of World Athletics. It won’t matter for most of us, as we’re not exactly planning to win a world major any time soon. That means we can enjoy the absolute lack of ground feel until the cows come home, and we’re definitely planning to. We’ve taken the SC Trainer to races, long runs, and even concerts because it can give us short kings a few extra inches of clearance.

It’s a shoe that can go long thanks to the heap of foam, but it can also pick up the pace thanks to the Energy Arc plate in the midsole. Despite its massive stack, the SC Trainer is remarkably stable thanks to a carefully designed void down the middle. Honestly, how can you lose with this much going on?